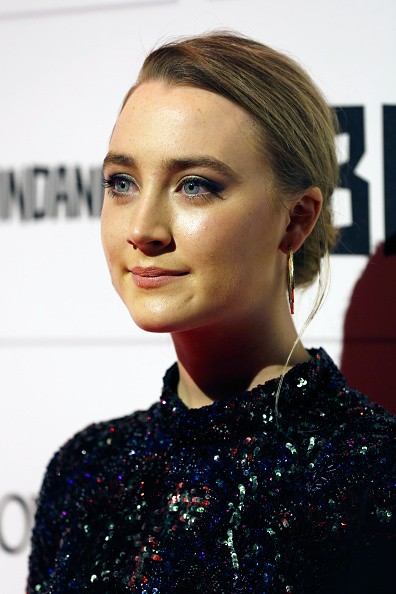 She holds dual citizenship of Ireland and the United States. Learn 50 facts about actress Saoirse Ronan.

1. Ronan was born in Woodlawn, Bronx, in New York City.

2. Saoirse is the only child.

3. Her father is also an actor.

4. Her mother had acted as a child.

5. Saoirse was briefly raised in County Carlow, Ireland, having moved there when she was three years old before moving to Howth, Dublin.

6. She holds dual citizenship of Ireland and the United States.

8. She was home schooled whilst living in Carlow.

9. As a baby, she sometimes accompanied her father on the set when he was working on such films as The Devil's Own and Veronica Guerin.

11. She came to international prominence in 2007 after co-starring as Briony Tallis in the film Atonement.

13. She was one of the youngest actresses to receive an Oscar nomination.

14. Her film breakthrough was followed by her starring role in Peter Jackson's The Lovely Bones for which she was awarded a Critics' Choice Award, a Saturn Award, and a BAFTA Award nomination for Best Actress in a Leading Role.

15. Other notable films include the romantic comedy I Could Never Be Your Woman, the supernatural film Death Defying Acts, the science fiction-fantasy City of Ember, the epic true story The Way Back, the action thriller Hanna, the romantic-science fiction The Host, How I Live Now, Wes Anderson's comedy The Grand Budapest Hotel and John Crowley's romantic drama Brooklyn that earned her widespread critical acclaim.

16. In February 2016, Ronan is set to make her Broadway debut in a revival of The Crucible, playing the role of Abigail Williams.

17. Ronan made her screen debut on Irish public service broadcaster RTé, in the 2003 prime time medical drama The Clinic and then appeared in the mini-serial Proof.

18. Ronan auditioned to play Luna Lovegood in Harry Potter and the Order of the Phoenix, a role she eventually lost out to Evanna Lynch.

19. At the age of twelve, Ronan was asked to attend a casting call for Joe Wright's 2007 film adaptation of Ian McEwan's 2001 novel Atonement. She auditioned for and won the part of Briony Tallis, a 13-year-old aspiring novelist, who irrevocably changes the course of several lives when she accuses her older sister's lover of a crime he did not commit.

20. Ronan's next film was Amy Heckerling's often-delayed romantic comedy I Could Never Be Your Woman. Initially shot in 2005 in Los Angeles and London, the film went straight-to-DVD after it had struggled to attract financing and several deals disintegrated during its post-production in spite of its budget of US$25 million. In the film, Ronan portrayed the character of Izzie Grossman, the pubescent daughter of a television show screenwriter, played by Michelle Pfeiffer, who falls for a younger man (Paul Rudd), while Izzie falls in love for the first time herself.

21. Upon its release, the independent project garnered generally lukewarm reviews, with Joe Leydon of Variety summing it as "a desperately unfunny mix of tepid showbiz satire and formulaic romantic comedy".

22. In 2008, Ronan starred in both Death Defying Acts and the science-fiction fantasy film City of Ember.

23. In Gillian Armstrong's supernatural romantic thriller Death Defying Acts, she played Benji McGarvie, the daughter of an impoverished and uneducated psychic, played by Catherine Zeta-Jones, who begins a passionate affair with magician Harry Houdini at the height of his career.

24. Ronan was awarded an Irish Film & Television Award for her performance in Death Defying Acts.

25. In Gil Kenan's City of Ember Ronan starred as Lina Mayfleet, a teenager who must save the people of the fictional underground city named Ember. The fantasy film, based on the 2003 novel by Jeanne DuPrau, received mixed reviews from critics, and grossed US$17 million worldwide, well below its US$55 million budget.

26. In 2009, Ronan was cast to star in Ridley Scott's Robin Hood but dropped out to star alongside Rachel Weisz, Mark Wahlberg, Susan Sarandon and Stanley Tucci in Peter Jackson's The Lovely Bones, an adaptation of the book of the same name by Alice Sebold.

27. Ronan and her family were originally hesitant for Ronan to accept her role in The Lovely Bones because of its subject matter, but agreed after meeting with Jackson, who described her as "just amazing on-screen".

28. In 2010, Saoirse was invited to join the Academy of Motion Picture Arts and Sciences.

29. In 2010's The Way Back, directed by Peter Weir, Ronan played the character of Irena, a Polish orphan, who joins a group of prisoners who escape from the gulag in Siberia in 1940 and attempt to make a 4,000-mile trek to India. Shot on location in Bulgaria, India and Morocco alongside Jim Sturgess, Colin Farrell and Ed Harris, the war drama film received generally positive reviews, with The Telegraph calling it "a journey that feels awful and heroic and unfathomable - and one you'll want to watch again". Her performance in the film garnered Ronan her fourth IFTA Award.

30. In 2011, Ronan starred as the title character in the action thriller Hanna about a 15-year-old girl who has been brought up in the Arctic wilderness to be the perfect assassin. Co-starring Cate Blanchett and Eric Bana, the film marked her reunion with Atonement director Joe Wright, who was consulted after Ronan prompted the producers to consider him.

31. In November 2011, Ronan took part in a promotion for the Irish Film Institute Archive Preservation Fund, in which she was digitally edited into popular Irish films of the past, as well as documentary footage.

32. Also in November 2011, Ronan was announced as an ambassador for the ISPCC.

34. Also in 2011, Ronan was cast in the title role for Hiromasa Yonebayashi's Arrietty's United Kingdom release.

35. She was in talks to play the woodland elf Itaril in Peter Jackson's The Hobbit film series but eventually withdrew, citing schedule issues. The character was never recast and does not appear in the Hobbit films.

36. She was cast as Kitty in Joe Wright's Anna Karenina but dropped out due to scheduling.

37. Ronan's next film was Andrew Niccol's film adaptation of Stephenie Meyer's novel The Host in which she plays the dual main characters of Wanderer and Melanie Stryder, a human rebel who was captured and implanted with a parasitic alien soul. The film debuted in cinemas in March 2013 and generally panned by critics, who called it "poorly scripted and dramatically ineffective".

38. Also in 2013, Ronan starred in director Neil Jordan's vampire film Byzantium, an adaptation of the play of the same name, and in Geoffrey S. Fletcher's directorial debut Violet & Daisy, where she again played a teen assassin.

39. Ronan's last film in 2013 was the film adaptation of the 2004 novel How I Live Now by Meg Rosoff. Directed by Kevin Macdonald, it was screened in the Special Presentation section at the 2013 Toronto International Film Festival.

40. On 2 December 2013, Ronan announced the winner of the Turner Prize in Derry as part of the UK City of Culture 2013, and presented the prize to Laure Prouvost.

42. In April 2014, Ronan has been cast as Leia in the psychological thriller Stockholm, Pennsylvania directed by Nikole Beckwith.

43. Ronan was considered for the titular role in Disney's 2015 remake of Cinderella, but the part eventually went to English actress Lily James.

44. Ronan was cast as the lead role of Eilis Lacey in the universally acclaimed film Brooklyn, directed by John Crowley. It is based on the novel of the same name by Colm Toibin. The film was released on 6 November 2015, Ronan's performance earned her widespread acclaim from critics.

48. Ronan and MacKay met whilst filming their movie How I Live Now, according to its director."