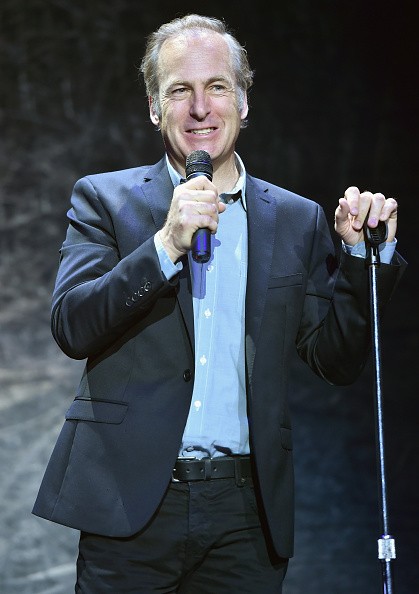 2. He is an actor, comedian, writer, director and producer.

3. He co-created and co-starred in the HBO sketch comedy series Mr. Show with Bob and David.

5. From the late 1980s to 1990s, Odenkirk worked as a writer for television shows Saturday Night

6. Live, Late Night with Conan O'Brien, Get a Life, The Ben Stiller Show and The Dennis Miller Show.

7. In the mid-1990s, he and David Cross created the Emmy-nominated sketch comedy program Mr. Show with Bob and David, which ran for four seasons and ultimately became a cult success.

8. In the early 2000s, Odenkirk discovered the comedy duo Tim & Eric and produced their television series Tom Goes to the Mayor and Tim and Eric Awesome Show, Great Job!

9. He directed three films, Melvin Goes to Dinner, Let's Go to Prison and The Brothers Solomon.

10. Odenkirk was born in Berwyn, Illinois and raised in nearby Naperville.

12. His father was Walter, who was employed in the printing business.

13. His parents were Roman Catholics of German and Irish descent.

14. His parents divorced in part due to Walter Odenkirk's alcoholism, which would influence Bob's decision to avoid alcohol as much as possible.

15. He would later say that he grew up "hating" Naperville because "it felt like a dead end, like Nowheresville. I couldn't wait to move into a city and be around people who were doing exciting things."

17. He began his foray into comedy writing as a radio DJ for WIDB (Carbondale, Illinois), his local college station at SIU-Carbondale.

19. He created a late-night (midnight to 4am) radio comedy show called "The Prime Time Special" with many recurring characters. "It often had us in stitches" said then WIDB Program Director, Victor Lentini.

20. After three years of college, Odenkirk decided to try writing and improv in Chicago.

21. Studying with Del Close, Odenkirk attended "The Players Workshop of the Second City" where he met Robert Smigel, and they began a collaboration that would last for years and take Odenkirk to Saturday Night Live.

22. He also performed at the Improv Olympic alongside notable comedians Chris Farley and Tim Meadows.

23. Odenkirk said his strongest comedic influence was Monty Python's Flying Circus, primarily due to its combination of cerebral and simple humor.

25. He visited Chicago's Second City Theater at the age of fourteen.

27. He has written and produced many TV pilots, including The Big Wide World of Carl Laemke and David's Situation, but none have made it to air or been picked up as a series.

28. In 2004, Odenkirk received an unsolicited package including the work of Tim Heidecker and Eric Wareheim. Inspired by their unique voice, he connected with them and helped them develop a semi-animated show for Adult Swim called Tom Goes to the Mayor. He assisted Tim and Eric with the development of their second series, Tim and Eric Awesome Show, Great Job.

29. He had a number of small featuring roles on TV shows, including Everybody Loves Raymond, Dr. Katz, Professional Therapist, Seinfeld, NewsRadio, Just Shoot Me!, Joey, Curb Your Enthusiasm, Arrested Development, Entourage, Weeds and How I Met Your Mother.

30. Odenkirk was in consideration to play Michael Scott in the pilot of The Office, a role which ultimately went to Steve Carell.

31. Odenkirk finally guested in the final season of The Office as a Philadelphia manager strongly reminiscent of Michael Scott.

33. Working alongside Robert Smigel and Conan O'Brien, he contributed to many sketches they created, but felt uncertain of the efficacy of his own writing at the show.

34. He acted in several small roles on the show, most visibly during a 1991 parody commercial for Bad Idea Jeans. During his final year at SNL, he worked alongside Adam Sandler, David Spade, Chris Rock and Chris Farley, but eventually he decided to leave the show in order to pursue performing.

35. He has credited SNL with teaching him many lessons about sketch writing, from senior writers like Jim Downey and Al Franken, as well as his friends Smigel and O'Brien.

36. When SNL took its 1988 summer break, Odenkirk returned to Chicago to perform a stage show with Smigel and O'Brien, titled Happy Happy Good Show. The following summer he did a one-man show, Show-Acting Guy, directed by Tom Gianas. During his final summer hiatus, he wrote and acted in the Second City Mainstage show, Flag Burning Permitted in Lobby Only. In that particular show, he wrote the character "Matt Foley, Motivational Speaker", for Chris Farley, which would later be reprised on SNL.

37. In 1991, Odenkirk was hired to write for the TV show Get a Life, which starred Late Night with David Letterman alumnus Chris Elliott.

39. Odenkirk's friendship with Ben Stiller, with whom he briefly shared an office at SNL, would lead to him being hired for the cast of The Ben Stiller Show in 1992.

40. Working as both a writer and actor on the show, he created and starred in the memorable sketch "Manson Lassie", and helped the show win an Emmy Award for writing. However, the show had already been canceled by the time it won the award.

43. In 1993, Odenkirk began a recurring role on The Larry Sanders Show as Larry Sanders' agent, Stevie Grant. He would continue the character through 1998.

44. Also in 1993, Odenkirk had brief acting roles on Roseanne and Tom Arnold's The Jackie Thomas Show.

45. Radio artist Joe Frank hired Odenkirk and David Cross to appear in Frank's 1994 radio programs, "A Hearing" and "The Last Run" which, in 1997, was combined to become "The OJ Chronicles."

46. Odenkirk's first roles in film were very minor roles in films such as Wayne's World 2, The Cable Guy, Can't Stop Dancing and Monkeybone.

47. In 2006, Odenkirk directed Let's Go to Prison, which was written by Thomas Lennon and Robert Ben Garant, and starred Will Arnett, Dax Shepard and Chi McBride. The film received a 12% "All Critics" score from the website Rotten Tomatoes and had a total box office gross of a little more than US$4.6 million.

48. After starring in Breaking Bad, Odenkirk began to have more prominent roles in critically successful films such as The Giant Mechanical Man, The Spectacular Now, which received the Special Jury Award for Acting at the 2013 Sundance Film Festival, and the Alexander Payne-directed film Nebraska, which was nominated for a Palme d'Or at the 2013 Cannes Film Festival.

49. Odenkirk is married to Naomi Yomtov, who is the executive producer of With Bob and David.

50. Odenkirk and Yomtov have two children.