50 facts from life of Carlos Santana 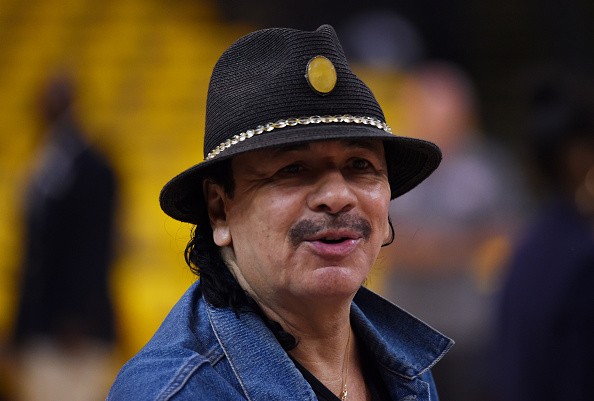 (Photo : Credit: Thearon W. Henderson) Caption:OAKLAND, CA - JUNE 07: Musician Carlos Santana rehearses prior to Game Two of the 2015 NBA Finals between the Golden State Warriors and the Cleveland Cavaliers at ORACLE Arena on June 7, 2015 in Oakland, California. NOTE TO USER: User expressly acknowledges and agrees that, by downloading and or using this photograph, user is consenting to the terms and conditions of Getty Images License Agreement. (Photo by Thearon W. Henderson/Getty Images)

2. He learned to play the violin at age five.

3. Learned to play the guitar at age eight under the tutelage of his father.

4. His father was a mariachi musician.

6. Young Carlos was heavily influenced by Ritchie Valens at a time when there were very few Latinos in American rock and pop music.

7. The family moved from Autlán de Navarro to Tijuana, the city on Mexico's border with California, and then San Francisco. Carlos stayed in Tijuana but later joined his family in San Francisco, graduating from James Lick Middle School, and in 1965 from Mission High School.

9. Carlos Santana first became famous in the late 1960s and early 1970s with his band, Santana, which pioneered a fusion of rock and Latin American music.

11. He experienced a resurgence of popularity and critical acclaim in the late 1990s.

12. In 2003 Rolling Stone magazine listed Santana at number 20 on their list of the 100 Greatest Guitarists of All Time.

14. Santana was influenced by popular artists of the 1950s such as B.B. King, T-Bone Walker, and John Lee Hooker.

15. Soon after he began playing guitar, he joined local bands along the "Tijuana Strip" where he was able to begin adding his own unique touch to '50s Rock 'n' Roll.

16. He was also introduced to a variety of new musical influences, including jazz and folk music, and witnessed the growing hippie movement centered in San Francisco in the 1960s.

17. After several years spent working as a dishwasher in a diner and busking for spare change, Santana decided to become a full-time musician.

18. In 1966 he gained prominence due to a series of accidental events, all happening on the same day.

19. Santana was a frequent spectator at Bill Graham's Fillmore West.

21. In 1972, Santana became interested in the pioneering fusion band The Mahavishnu Orchestra and its guitarist, John McLaughlin.

22. Aware of Santana's interest in meditation, McLaughlin introduced Santana, and his wife Deborah, to his guru, Sri Chinmoy. Chinmoy accepted them as disciples in 1973. Santana was given the name Devadip, meaning "The lamp, light and eye of God".

23. Santana and McLaughlin recorded an album together, Love, Devotion, Surrender (1973) with members of Santana and The Mahavishnu Orchestra, along with percussionist Don Alias and organist Larry Young, who both had made appearances on Miles Davis' classic album Bitches Brew in 1969.

24. In 1973, Santana, having obtained legal rights to the band's name, Santana, formed a new version of the band with Armando Peraza and Chepito Areas on percussion, Doug Rauch on bass, Michael Shrieve on drums, and Tom Coster and Richard Kermode on keyboards. Santana later was able to recruit jazz vocalist Leon Thomas for a tour in Japan on July 3 and 4, 1973, which was recorded for the live, sprawling, high-energy triple vinyl LP fusion album Lotus.

25. After his break with Sri Chinmoy, Santana went into the studio to record another solo album with Keith Olson and legendary R&B producer Jerry Wexler.

26. The 1983 album Havana Moon revisited Santana's early musical experiences in Tijuana with Bo Diddley's "Who Do You Love" and the title cut, Chuck Berry's "Havana Moon".

27. Santana again paid tribute to his early rock roots by doing the film score to La Bamba, which was based on the tragically short life of rock and roll legend Ritchie Valens and starred Lou Diamond Phillips.

29. Carlos Santana, alongside the classic Santana lineup of their first two albums, was inducted as an individual, into the Rock and Roll Hall of Fame in 1998.

31. In 2001, Santana's guitar skills were featured in Michael Jackson's song "Whatever

31.Happens", from the album Invincible.

34. Together with Deborah, Santana founded a not-for-profit organization, the Milagro ("Miracle") Foundation, which provides financial aid for educational, medical, and other needs.

36. Santana became engaged to drummer Cindy Blackman, after proposing to her during a concert of the Universal Tone Tour at Tinley Park in Chicago, Illinois, on July 9, 2010.

37. Santana and Blackman were married in December 2010.

39. In 2002, Santana released Shaman, revisiting the Supernatural format of guest artists including P.O.D. and Seal. Although the album was not the runaway success its predecessor had been, it produced two radio-friendly hits.

40. In early August 2003, Santana was named fifteenth on Rolling Stone magazine's list of the "100 Greatest Guitarists of All Time".

42. Santana was the first songwriter designated a BMI Icon at the company's Latin Awards. The honor is given to a creator who has been "a unique and indelible influence on generations of music makers."

47. He considered Bloomfield a direct mentor, writing of a key meeting with Bloomfield in San Francisco in the foreword he wrote to a biography of Bloomfield, Michael Bloomfield: If You Love These Blues - An Oral History in 2000.

50. In the fall of 2014, Carlos Santana released his memoir "The Universal Tone: Bringing My Story to Light" which tells his fans of musical self-determination and inner self-discovery, with personal stories filled with colorful detail and life-affirming lessons.