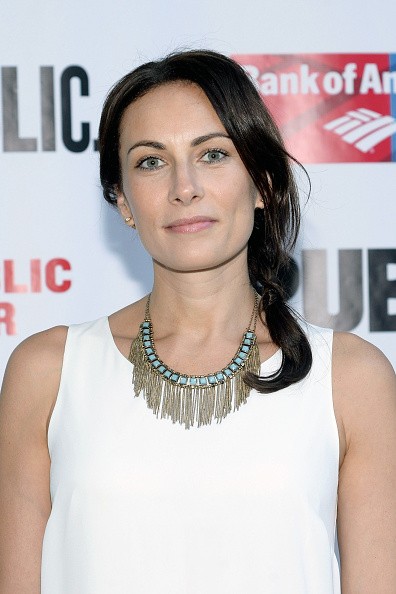 2. Her mother Linda Wonneberger is a vocal coach and former actress.

3. Her father is Martin Vidnovic, a Broadway actor and singer.

4. She is of Croatian, German, Irish, and Native American heritage.

5. When quite young, her parents divorced and she moved to Kinnelon, New Jersey, with her mother and her stepfather Salvatore Benanti.

6. Her stepfather Benanti is a psychotherapist, whose name she took and whom she has referred to as her father.

7. Benanti remembers being "very serious" and "a bit of an ugly duckling" as a child.

8. As child she was intensely interested in musical theatre, which distanced her from other vhildren.

9. Though her parents refused to let Laura audition for professional theatre, Laura appeared in several high school and community productions, including Evita, Follies, and Into the Woods.

13. She is a stage and screen actress.

14. Played "Louise" in the 2008 Broadway revival of Gypsy, winning the Tony Award.

15. Appeared in the stage musical Women on the Verge of a Nervous Breakdown in 2010, winning the Drama Desk Award and Outer Critics Circle Award for Best Featured Actress in a Musical.

16. She played Baroness Elsa Schräder in the 2013 NBC television production of The Sound of Music Live!.

17. In 1998, Paper Mill's then-artistic director Robert Johanson recommended Benanti for the role of Liesl in a Broadway revival of The Sound of Music. She auditioned for the show's producers and was considered too mature-looking to play Liesl, but, after several call-backs, was signed at the age of 18 to play one of the nuns and to understudy Rebecca Luker as Maria.

18. When she was cast in The Sound of Music, Benanti had attended New York University for two weeks; the dean recommended she go on leave to take the job.

19. In 1999, Benanti appeared in the Broadway revue Swing!, for which she received a Tony nomination for Best Performance by a Featured Actress in a Musical.

22. During a mid-performance pratfall in Into the Woods, Benanti fractured her neck, herniating two discs directly onto her spinal cord and cutting off spinal fluid, a condition that sometimes leads to paralysis. The injury was misdiagnosed and Into the Woods producers asked Benanti not to mention her injury; when she began missing performances due to neck problems, rumors spread that Benanti was behaving unprofessionally, something that she calls "really hurtful". She says, "I had a serious injury and there was absolutely no way I could have done the show. I tried to. I tried to go back and do it but I physically couldn't. Benanti was eventually replaced in the show by Erin Dilly.

23. Eight months after her initial injury, Benanti was rediagnosed and received surgery that could have damaged her voice but was successful, though as of 2005 she still experienced neck pain and myelopathy.

24. Three weeks after undergoing spinal surgery, Benanti started previews in March 2003 for the Broadway revival of Nine, in which she played Claudia, a movie star who inspires Guido, a director played by Antonio Banderas. She left the show in September 2003.

25. From April 2006 to December 2006 she played Julia Sullivan in the Broadway musical The Wedding Singer.

26. In July 2007, Benanti played in a three-week limited run of the musical Gypsy in the Encores! production at the New York City Center as Louise, alongside Patti LuPone as Rose and Boyd Gaines as Herbie. In March 2008, the production transferred to Broadway, where it ran until January 2009 and received widespread critical acclaim.

28. Benanti appeared in The Public Theater's world premiere production of Christopher Durang's play Why Torture Is Wrong, And the People Who Love Them, from April 6, 2009 to April 26, 2009.

30. Benanti appeared in the new musical Women on the Verge of a Nervous Breakdown on Broadway from October 8, 2010, until January 2, 2011. She received a Tony Award nomination, and won the Drama Desk Award and Outer Critics Circle Award for Best Featured Actress in a Musical for her performance.

31. In June 2013, Benanti performed as the soprano soloist in the San Francisco premiere of Andrew Lippa's oratorio, I Am Harvey Milk.

32. She played Goddess in The Public Theater's musical adaptation of The Tempest, which was presented at the Delacorte Theatre from September 6 through 8, 2013.

33. From April 2 through 6, 2014, Benanti starred as Rosabella in the New York City Center Encores! production of The Most Happy Fella alongside Shuler Hensley and Cheyenne Jackson.

34. On February 16, 2015, Benanti played Lucille Frank in the Manhattan Concert Productions presentation of Parade at Avery Fisher Hall. She appeared in New York Spring Spectacular at Radio City Music Hall from March 12 through May 7, 2015.

35. In the spring of 2016, Benanti will star in the Roundabout Theatre Company revival of She Loves Me opposite Zachary Levi.

36. She appeared in the World AIDS Day concerts of Pippin, Children of Eden and The Secret Garden.

37. In addition to stage roles, Benanti was a regular on the short-lived FX Networks sitcom Starved, which received mixed reviews but which Benanti described as "a good experience. I got a lot of camera experience, which was something I just hadn't had."

38. She participated in a studio cast recording of Rodgers and Hammerstein's Allegro which was released by Sony Classics in February 2009.

39. She also appears as a guest artist on the Gay Men's Chorus of Washington, D.C.'s live album, You've Got to Be Carefully Taught: The Songs of Hammerstein & Sondheim, taken from a 2002 performance at the Kennedy Center.

40. She is also a songwriter and guitarist.

41. Benanti has written songs privately since at least the early 2000s.

42. In 2005, she said that she was working on a folk-rock solo CD, though "Musical theatre is my first love[...]I want to take my music and orchestrate it in a kind of old fashioned style, and take some standards and 'popularize' them-do a true crossover. I'm working on it."

43. In Constant Search of the Right Kind of Attention, a live recording of Benanti's concert engagement at 54 Below, was released by Broadway Records in September 2013.

45. Benanti and Barron married on July 25, 2005 but by the end of the year were going through what Benanti has called a "terrible divorce." They were divorced in 2006.

47. In September 2007 Benanti and Pasquale married.

48. On July 8, 2013, they made the statement "After almost six years of marriage, Steven Pasquale and Laura Benanti are amicably filing for divorce. They remain loving and committed friends."