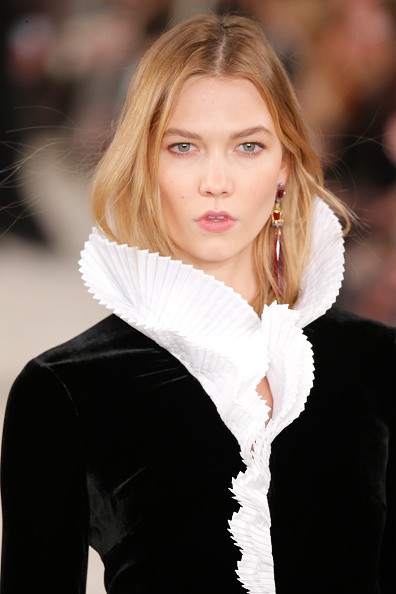 In February 2011, supermodel Tyra Banks stated that Kloss was one of her favorite models because of her "unique, atypical beauty". Learn 50 facts about model Karlie Kloss.

1. Her middle name is Elizabeth.

5. Kloss was born in Chicago, Illinois.

6. Her mother is a freelance art director.

7. Her father is an emergency physician.

8. Her family has Danish roots.

9. She has three sisters, Kristine, and twins Kimberly and Kariann.

12. Kloss has called her classical ballet training "a beautiful thing" that taught her how to move in the modeling world and was a great training ground for her runway walk.

13. Kloss was "discovered at a local benefit runway show".

14. In 2006, at the age of 14, Kloss posed for a cover and editorial shoot for the June issue of Scene Magazine in Chicago with Photographer David Leslie Anthony, in an editorial spread titled "Almost Famous".

15. One of her first modelling stints was for Abercrombie kids when she posed for the brand's photography shot by Bruce Weber.

16. In January 2008 she left Elite and signed with NEXT Model Management.

19. After four years of being represented by Next Model Management, Kloss is now signed with IMG Models. "Karlie has an immense and loyal following, and we welcome the opportunity to help expand her relationships through endorsements as well as our global network that reaches beyond fashion", said Ivan Bart, IMG Models' senior vice president and managing director.

21. Molly Sims, whom she considers a mentor, told New York she thinks Kloss will still "do well at 30" because of her "classic look".

23. Kloss is the face of the Marc Jacobs fragrance Lola.

27. She has ventured into TV when she appeared in Season Four, Episode 1 of Gossip Girl as herself.

28. She became a muse for fashion designer John Galliano and has appeared in Dior and John Galliano campaigns and opened both shows, Christian Dior Haute Couture and Dior resort shows from spring/summer 2010.

29. In the spring/summer 2011 Season, she opened ten shows and closed eight.

30. Her runway walk, one of the most unusual, is often described as powerful.

31. In February 2011, supermodel Tyra Banks stated that Kloss was one of her favorite models because of her "unique, atypical beauty".

32. In 2011 Kloss renewed her contract with Christian Dior for the third season in a row.

33. Life magazine photographed Kloss for the cover of a special print issue handed out during New York Fashion Week in September 2011. The photo story inside the issue was photographed during the summer of 2011 and shows Kloss at the couture shows in Paris, in New York City, and in Saint Louis, her hometown.

35. In 2012 Kloss was featured on the September covers of British Vogue, Japanese Vogue, Harper's Bazaar Russia, and Numéro.

36. She appeared in the campaign ads of Juicy Couture, Stefanel, Elie Saab, and Jean Paul Gaultier.

37. She co-hosted with the revival of the MTV series House of Style with fellow model Joan Smalls.

38. Just before the Victoria's Secret Fashion in 2012, Karlie cut her long hair into a bob which is famously called the "Karlie."

40. Kloss worked with Victoria's Secret on their 2013 summer swimwear video.

45. She also collaborated with Frame Denim to design the Forever Karlie jeans collection.

47. In September 2014, after many speculations, L'Oreal Paris officially announced that they have signed Karlie to be the newest face.

48. In the September 2014 issue of American Vogue, she was featured on the cover with Joan Smalls, Cara Delevingne, Arizona Muse, Edie Campbell, Imaan Hammam, Fei Fei Sun, Vanessa Axente and Andreea Diaconu as "The Instagirls!"

49. One of her friends is Taylor Swift.

50. In 2015, Kloss and one of her best friends, Taylor Swift, covered the March issue of American Vogue together.