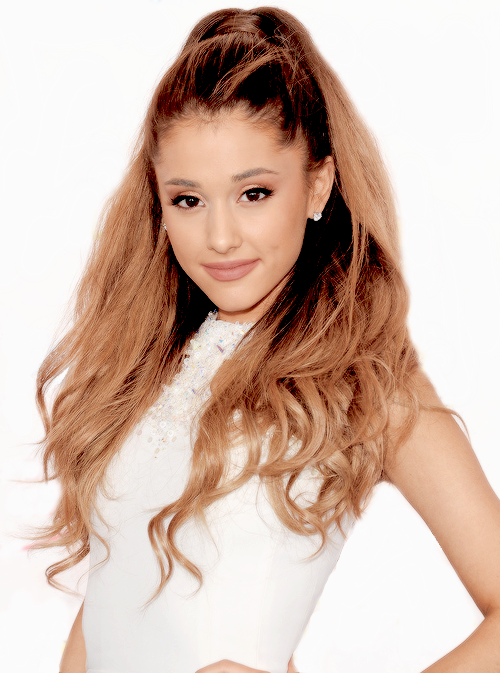 50 facts from life of a young singer and actress Ariana Grande.

2. Her full name is Ariana Grande-Butera.

3. Her name was originally inspired by Princess Oriana from Felix the Cat.

5. Grande is of Italian descent.

6. She began her career in the Broadway musical 13.

7. She landed the role of Cat Valentine on the Nickelodeon television series Victorious in 2009.

8. Grande lent her voice to animated television and films.

9. Grande has been featured on the cover of numerous teen and music magazines.

10. Her music career began with the soundtrack Music from Victorious in 2011.

11. She signed a recording contract with Republic Records and released her debut studio album, Yours Truly in 2013.

12. Her debut album landed at number one on the US Billboard 200.

13. To strengthen her vocal range, she began working with vocal coach Eric Vetro.

14. Her sophomore album is titled My Everything and was released in 2014.

16. She is currently on tour promoting My Everything in North America and Europe. The tour is titled The Honeymoon Tour.

21. As a child, Grande performed with the Fort Lauderdale Children's Theater, playing her first role as Annie, as well as performing in the musicals The Wizard of Oz and Beauty and the Beast.

23. At the age of 8, she performed at a karaoke lounge on a cruise ship, in various orchestras such as South Florida's Philharmonic, Florida Sunshine Pops and Symphonic Orchestras.

24. Grande has cited Cuban-American star Gloria Estefan as the person who inspired her to pursue a career in the music industry, after Estefan complimented a performance she saw Grande give on a cruise ship.

25. Grande made her national television debut singing "The Star-Spangled Banner" for the Florida Panthers.

26. Grande auditioned for the Nickelodeon television show Victorious along with 13 co-star Elizabeth Gillies. In this sitcom Grande was cast as Cat Valentine.

27. Grande had to dye her hair red every other week for the role because the executive producer, Dan Schneider, did not want all cast members to be brunettes.

28. Grande made several recordings of herself singing covers of songs by Adele, Whitney Houston and Mariah Carey, and she uploaded them to YouTube.

29. She voiced the fairy, Princess Diaspro, in 13 episodes of the Nickelodeon animated television series Winx Club.

30. Grande starred over the holiday season as Snow White in a pantomime-style musical theatre production called A Snow White Christmas.

31. She also joined Justin Bieber on his Believe Tour for three shows and kicked off her own headlining tour, The Listening Sessions.

32. At the 2013 American Music Awards, she won the award for New Artist of the Year.

33. She released a four-song Christmas EP, Christmas Kisses in December 2013.

34. She earned the Favorite Breakout Artist award at the People's Choice Awards 2014.

37. On September 27, 2014, Grande was the musical performer on the season 40 premiere of Saturday Night Live with Chris Pratt hosting.

38. It was also announced that Grande will launch her first fragrance which will be released in September 2015.

39. At the age of ten, Grande co-founded the South Florida youth singing group Kids Who Care, which performed for charitable fund-raising events, raising over $500,000 for charities in 2007 alone.

40. After watching Blackfish, she urged fans to stop supporting SeaWorld and has become a vegan.

41. In September 2014, Grande participated at the charitable Stand Up to Cancer television program, performing the title track "My Everything" in dedication to her grandfather, who had died from cancer in July.

42. Grande, who has adopted several rescue dogs as pets, promoted pet adoption and paid the adoption fees of 35 rescue dogs.

43. She grew up mainly listening to urban pop and 90s music.

44. Grande cites Whitney Houston as a major influence on her career, stating that Houston has inspired her "endlessly" since she was a child.

45. Grande possesses a four-octave and a semitone soprano vocal range, and the whistle register.

46. She was in a relationship with Jai Brooks, a member of the Australian YouTube group The Janoskians. She also dated The Wanted member Nathan Sykes.

48. Grande has been nominated for two Grammy Awards.

49. In her free time she enjoys watching movies and swimming.

50. She likes to eat salmon and vegetables and strawberries.