50 facts about actress Claire Danes: came to prominence with her role as Angela Chase in My So-Called Life
Share Tweet Email 0 Comments
NEXT> 50 interesting facts about Jordin Sparks: was crowned the winner of the sixth season of American Idol
Tuesday, May 26, 2020
STAY CONNECTED WITH US

50 facts about actress Claire Danes: came to prominence with her role as Angela Chase in My So-Called Life 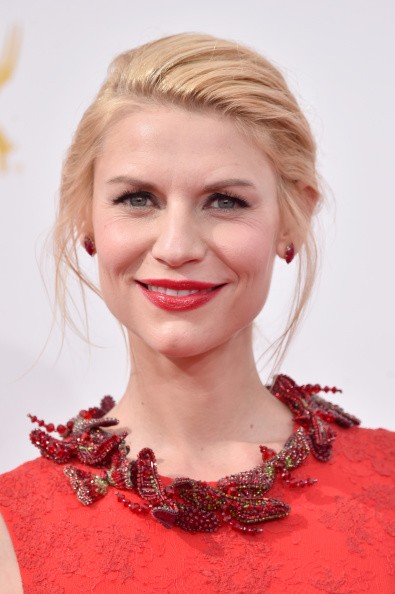 1. Claire Catherine Danes is an American actress who first came to prominence with her role as Angela Chase in the 1994 series My So-Called Life.

2. The role won her the first of four Golden Globe Awards.

5. From 1998 to 2000, Danes attended Yale University before dropping out to return to acting.

6. Claire Danes appeared in an Off-Broadway production of The Vagina Monologues in 2000, and made her Broadway debut playing Eliza Doolittle in the 2007 revival of Pygmalion.

7. In 2010, she portrayed Temple Grandin in the HBO TV film Temple Grandin, which won her a second Golden Globe and the first of three Emmy Awards. Since 2011, she has starred as Carrie Mathison in the Showtime series Homeland, for which she has won two Emmys and two Golden Globes.

10. She is the daughter of a sculptor and printmaking artist, Carla Danes (née Hall), and a photographer, Christopher Danes.

12. Danes's parents met when they were both studying at the Rhode Island School of Design.

13. Danes's mother was born in Elizabeth, New Jersey in 1945 and has a Bachelor of Fine Arts in Painting and Education from Rhode Island School of Design (1967), an Associate of Applied Science in Textile Design from Fashion Institute of Technology (1971), a Master's degree in Early Childhood Education from Hunter College (1987), and a Masters of Fine Arts from Otis College of Art and Design (2002).

14. During Danes's childhood her mother ran a small toddler day-care center called Danes Tribe out of the family's SoHo loft to supplement her work as a painter and textile designer, and later served as Danes's manager.

15. Danes's father was born in Austin, Texas in 1944 and, after initially studying Biology and Civil Engineering at Brown University, received a Bachelor of Fine Arts in Photography from Rhode Island School of Design (1968), where he studied with Harry Callahan.

16. During Danes's childhood her father worked as a general contractor for 20 years, working on residential buildings in a company he ran called Overall Construction in New York. He also worked as a photographer and computer consultant.

17. Claire Danes's father is the son of Gibson Andrew Danes, a former dean of Yale School of Art and Architecture from 1958 to 1968.

21. Claire Danes also attended the New York City Lab School for Collaborative Studies in New York City (the same school her Homeland co-star Morena Baccarin attended) and attended The Dalton School for one year of high school before moving with her parents to Santa Monica, California for the role in My So-Called Life.

24. After studying for two years as a psychology major, she dropped out to focus on her film career.

26. Claire Danes took dance classes from Ellen Robbins at Dance Theater Workshop and acting classes at the Lee Strasberg Theatre and Film Institute at the age of ten.

28. Although she continued to dance, Danes said that her focus shifted to acting by the time she was nine years old.

29. Her audition with Miloš Forman when she was eleven led to roles in several student films.

30. She signed with agent Karen Friedman at the Writers & Artists talent agency at the age of 12.

31. At age 13, Danes's first big job was working on the Dudley Moore TV sitcom pilot called Dudley, which was shot at Silvercup Studios in Astoria, Queens.

33. Claire Danes appeared in an episode of HBO's Lifestories: Families in Crisis entitled "The Coming out of Heidi Leiter".

34. She starred as the 15-year-old Angela Chase in the television drama series My So-Called Life, starring in the show and providing voiceovers for 17 of the series' 19 episodes, including the pilot episode. For her role, she won a Golden Globe Award and received an Emmy nomination.

35. Despite being canceled after only 19 episodes, My So-Called Life has developed a large cult following.

37. In 2010, Danes starred in the HBO production of Temple Grandin, a biopic about the eponymous woman with autism. She won the 2010 Emmy Award for Outstanding Lead Actress in a Miniseries or a Movie, the 2011 Golden Globe Award for Best Actress - Miniseries or Television Film and the 2011 Screen Actors Guild Outstanding Performance by a Female Actor in a Television Movie or Miniseries award. The film was well received and Grandin herself praised Danes's performance.

38. Since 2011, Danes has starred as Carrie Mathison in the Showtime series Homeland in which she plays an agent of the CIA who, unbeknownst to her employer, has bipolar disorder.

41. Claire Danes played Beth March in the 1994 film adaptation of Little Women. Although ABC canceled My So-Called Life in 1995, the show helped her to receive more film roles, including 1995's Home for the Holidays and 1996's I Love You, I Love You Not and To Gillian on Her 37th Birthday.

42. Her first leading role on the big screen came in 1996, when she portrayed Juliet in the 1996 film Romeo + Juliet, inspiring director Baz Luhrmann to call her, at age 16, "the Meryl Streep of her generation." Later that year, it was reported that she turned down the female lead role in Titanic. Danes said that while she may have been considered for the part, she was never offered the role.

43. Claire Danes got her start in New York City theater appearing in performances of Happiness, Punk Ballet, and Kids Onstage, for which she choreographed her own dance.

47. In 2004, Danes began a relationship with former Stage Beauty co-star, Billy Crudup, that lasted until 2006.

48. Claire Danes met actor Hugh Dancy on the set of Evening in 2006 in Newport, Rhode Island. They began dating and announced their engagement in February 2009.

49. They married in France in a secret ceremony in late August or early September 2009.

50. They have one child, a son named Cyrus. They live in the West Village neighborhood of New York City.