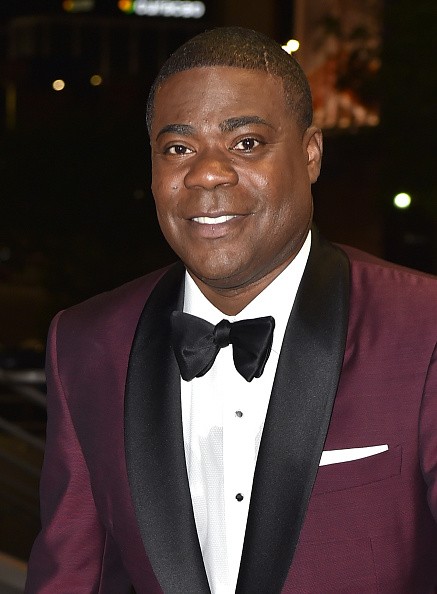 4. Born and raised in New York City, Morgan is a stand-up comedian and sketch-comedy player who has worked the national stand-up comedy circuit while appearing on several television programs over the last several years.

5. In January 2000, Tracy Morgan appeared as the main character in a music video for the single "Notorious," which featured Puff Daddy and Lil' Kim.

7. Tracy Morgan continues as a cast member of "Saturday Night Live" for his sixth season.

8. Tracy wrapped up his fourth season with the debut of the memorable character Woodrow, who left his mark by bringing guest Britney Spears (and other female hosts) down to his subterranean home and singing to her.

9. Some of Morgan's other memorable characters include "Judge Judy's" baliff, Bert, Bishop Don "Mack" Donald, host of "Pimp Chat," Mrs. Parker, mother of ne'er do well multiple felon Dante Parker (but as she says, "Not my baby!") Tate Witherspoon of the tough-talking law firm, Russell & Tate, as well as appearing in the popular commercial parody for "Uncle Jemima's Pure Mash Liquor."

11. In addition to appearing on "Weekend Update" as recurring character Bronx building superintendent Dominican Lou, he has made numerous comedic appearances as himself, both on "Update" and in backstage sketches where he grills the guest host with inappropriate questions.

13. He also appeared in the feature films "A Thin Line Between Love and Hate," Vanessa Middleton's new independent feature "30 Years to Life," and just completed "How High" for Jersey Films/Universal Pictures and "Jay and Silent Bob Strike Back" for Miramax/Dimension.

14. Morgan is married, has 3 children and lives in the Bronx, New York.

18. Morgan was born in the Bronx and raised in a housing project in Bedford Stuyvesant, Brooklyn.

19. His father named him Tracy in honor of a 17-year-old platoon mate and friend who shipped off to Vietnam with him and was killed in action days later.

20. He is the second-oldest of five children.

21. His parent were homemaker Alicia (née Warden), and Jimmy Morgan, a musician who returned from military duty in the Vietnam War as a recovering heroin addict, causing him to leave the family when Morgan was six years old.

22. The target of bullies as a child, Morgan attended DeWitt Clinton High School.

23. In 1985, at age 17 in his sophomore year, he learned his father had contracted AIDS from hypodermic needle use.

24. His father died in November 1987, at age 39. Morgan married his girlfriend Sabina that year and dropped out of high school just four credits short of his diploma.

25. Began earning money performing comedy on the streets after his best friend was murdered. He said in 2009: "He would say to me, 'Yo, Tracy, man, you should be doing comedy.' A week later, he was murdered. And that for me, that was like my Vietnam. I had my survival guilt when I started to achieve success. Why I made it out and some guys didn't."

26. Morgan embarked on a stand-up comedy career, successfully enough that he "finally moved to a nice community in Riverdale, from a run-down apartment next to Yankee Stadium in the Bronx".

27. Morgan made his screen debut playing Hustle Man on the television show Martin.

28. In the 2003 Chris Rock film Head of State, Morgan appeared as a man watching television, often questioning why they are not watching Martin.

29. Morgan was also a regular cast member on Uptown Comedy Club, a sketch-comedy show filmed in Harlem that aired for two seasons, from 1992 to 1994. H

34. Morgan filed for divorce in August 2009, after having been separated for approximately eight years.

35. Morgan credits one of his sons with having saved him from his alcoholism.

36. Morgan said in September 2011 that he and model Megan Wollover had become engaged six months earlier in San Francisco, and in January 2013 he announced that they were expecting their first child.

41. Morgan had his own show, The Tracy Morgan Show, in 2003, which was canceled after one season.

42. Morgan appeared in a stand-up special, One Mic, on Comedy Central.

45. He can be heard as Spoonie Luv on the Comedy Central program Crank Yankers and as Woof in the animated series Where My Dogs At?.

47. He appeared in Adam Sandler's film The Longest Yard as a transvestite inmate.

49. Morgan has hosted the VH1 Hip Hop Honors for two consecutive years and hosted the third season of Scare Tactics, the SyFy's hidden-camera show that pranks people by using their worst fears against them.

50. Morgan has done voice acting for animated features such as Blaster the guinea pig in Disney and Jerry Bruckheimer's G-Force, a bulldog named Luiz in Blue Sky Studio's Rio and its sequel, and Mr. Gristle in Laika's The Boxtrolls.