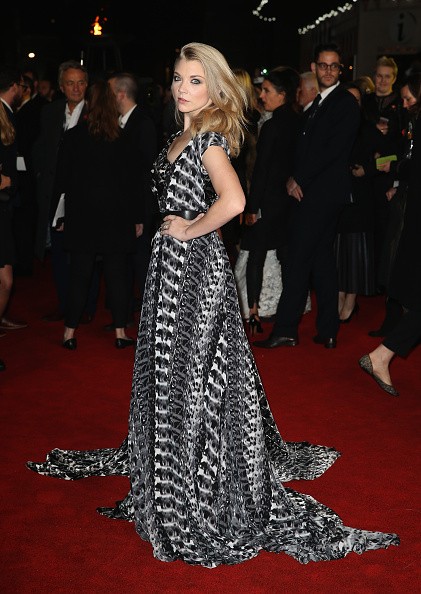 Dormer played Cressida in the films The Hunger Games: Mockingjay - Part 1 and Part 2. In preparation for the role, she shaved the left side of her head. Learn other facts about English actress Natalie Dormer.

1. Dormer was born in Reading, Berkshire.

2. Natalie Dormer grew up with her stepfather, mother, sister Samantha.

3. Her stepfather is a builder.

4. Natalie Dormer has a brother, Mark.

5. Natalie Dormer has said that she was the victim of bullying while at school, but "still to this day [she] can't place why".

6. At school, Natalie Dormer was head girl, a first class student, vice-captain of the school netball team, and traveled the world with her school's public speaking team.

7. During her school years, Natalie Dormer trained in dance at the Allenova School of Dancing.

8. Natalie Dormer describes herself as the "academic hopeful" of the family and was provisionally offered a place to study history at Cambridge; but, in her A-level History exam, she did not achieve the A grade she needed to attend.

9. Natalie Dormer decided she would audition for drama schools and decided to train at the Webber Douglas Academy of Dramatic Art in London.

11. She is best known for her roles as Anne Boleyn on the Showtime series The Tudors, as Margaery Tyrell on the HBO series Game of Thrones, Irene Adler and Jamie Moriarty on the CBS series Elementary, and as Cressida in the science-fiction adventure films The Hunger Games: Mockingjay - Part 1 and Part 2.

12. Natalie Dormer has been nominated for Best Performance at the Gemini Awards for her work in The Tudors.

13. Natalie Dormer has also been nominated for a Screen Actor's Guild Award for her performance in Game of Thrones.

14. Six months after graduating from Webber Douglas, Dormer won the role of Victoria in Casanova. This was her film debut and it was released in 2005. The director, Lasse Hallström, was so impressed with Natalie Dormer's comedic timing that he had the script writer expand her part.

16. After the filming of Casanova, Dormer was out of work for nine months, which she ascribes to "bad representation".

17. Natalie Dormer was attached to an independent film which kept being delayed because of financial problems.

19. Natalie Dormer also worked in data entry to support herself.

20. She has said that her being out of work for so long "was the best lesson I could have had in the first 12 months of my career".

21. In 2006, Natalie Dormer guest starred as Phillippa Balfour in the Rebus episode "The Falls".

22. In 2008, Natalie Dormer played Moira Nicholson in Agatha Christie's Marple: "Why Didn't They Ask Evans?" and appeared in a number of films such as Fence Walker and City of Life.

23. Natalie Dormer appeared in Incendiary, but her scenes were cut from the final film.

24. In March 2010, Natalie Dormer made her stage debut at the Young Vic theatre in London as Mizi in the play Sweet Nothings.

25. Her trademark is big doe eyes.

27. After six months of playing Mizi, Natalie Dormer went on to film some new roles, including the Duchess of York in Madonna's film W.E., Pvt. Lorraine in Captain America: The First Avenger, and Niamh Cranitch in the BBC court drama Silk.

28. Natalie Dormer then went on to her next stage role of Pat in .45 at Hampstead Theatre in November 2010.

29. Natalie Dormer returned to The Tudors as Anne Boleyn in a dream sequence for the fourth and final season in mid-2010.

30. Since 2012 and continuing through 2015, Dormer has played Margaery Tyrell in the HBO fantasy TV series Game of Thrones.

31. In March 2012, Natalie Dormer returned to the Young Vic to play the title role in After Miss Julie by Patrick Marber.

32. In March 2013, she played the Lady Door in the radio play of Neverwhere, based on the novel by Neil Gaiman.

33. Natalie Dormer appeared in the car racing drama Rush and the thriller The Counselor.

34. In 2013, Natalie Dormer played Irene Adler in the final three episodes of the first season of the CBS series Elementary; she reprised the role in the second season.

35. Dormer played Cressida in the films The Hunger Games: Mockingjay - Part 1 and Part 2. In preparation for the role, she shaved the left side of her head.

36. Since 2011, Natalie Dormer has been engaged to Anthony Byrne.

37. Natalie Dormer is also a member of London Fencing Academy.

39. Dormer and Byrne met in Dublin while filming The Tudors in 2007.

40. Natalie Dormer has stated that Cate Blanchett has been an influence in her career as an actress.

41. Despite rumors that Dormer is related to historical lady-in-waiting Jane Dormer, who served Queen Mary I, they have no familial connection. On this subject, Dormer stated, "There was a woman, called Jane Dormer, in the Royal Court who happened to have the same family name as me, but I think that's as far as it goes."

42. Natalie Dormer is also a member of London Fencing Academy.

44. Dormer took part in the 2008 PartyPoker.com Women's World Open in London, where she came in second to Emma Kennedy in the Celebrity Heat.

45. In August 2014, Natalie Dormer helped to raise awareness of the disease ALS by participating in the Ice Bucket Challenge, alongside The Tudors co-star Katie McGrath.