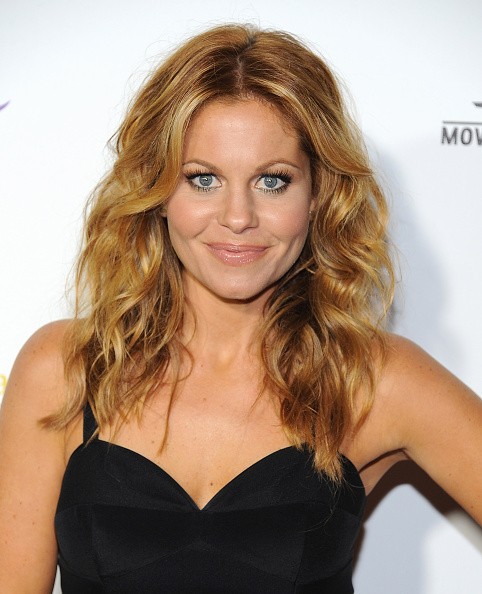 2. She is an actress, producer, author, and talk show host.

3. She is known for the role of D.J. Tanner, the eldest daughter, on the television series Full House.

5. She is the younger sister of actor Kirk Cameron.

7. On Dancing with the Stars: season 18, she finished in third place.

9. She is one of four children.

10. Following in the footsteps of her older brother Kirk, Bure decided to pursue acting.

11. She started in the entertainment business by appearing in a number of television commercials.

12. She guest starred in roles on shows such as St. Elsewhere, Growing Pains, and Who's the Boss?

13. In a 1985 episode of the sitcom Punky Brewster, Cameron portrayed a girl named Jennifer who had been kidnapped by her father.

14. In 1987, she had a role as the youngest sister of Eric Stoltz in the teen comedy Some Kind of Wonderful.

15. Bure began the most prominent role of her career in 1987 on the ensemble sitcom Full House, as Donna Jo "D.J." Tanner, the oldest daughter.

16. The long-running series of Full House ended in 1995, and she was a member of the cast during its entire run.

17. While on Full House, she was also featured in the made-for-TV movies No One Would Tell, playing an abused teen; She Cried No as a date-raped teen; NightScream, a mystery; and Camp Cucamonga, an adventure comedy.

18. Cameron guest-starred in the failed pilot Real Mature, and in an episode of Bill Nye The Science Guy as "Candace the Science Gal".

19. She also appeared in the Tom Hanks and Sally Field feature film Punchline.

20. Bure has hosted the Nickelodeon Kids' Choice Awards in 1990 with Dave Coulier and David Faustino.

21. She hosted the Nickelodeon Kids' Choice Awards again in 1994 with Joey Lawrence and Marc Weiner, becoming the first person to host twice or more.

22. After Full House ended in 1995, Bure guest starred on such network hits as Cybill and Boy Meets World.

23. After the birth of her children, she took a self-imposed hiatus from television and film to devote her time to her family and children.

25. She would co-host 50 Cutest Child Stars: All Grown Up on the E! network, along with Keshia Knight Pulliam of The Cosby Show fame.

27. Co-starred with Randy Travis in The Wager, and starred with Tom Arnold in the television movie Moonlight and Mistletoe for the Hallmark Channel in 2008.

28. Cameron returned to a television series in 2009 and was cast in Make It or Break It, a teenage gymnastics drama series on ABC Family, playing Summer Van Horne.

29. On March 4, 2014, she was announced as one of the celebrities to compete on the season 18 of Dancing with the Stars. Her professional partner was Mark Ballas.

31. It was announced that Bure would become a co-host of The View starting with its 19th season.

32. Bure kicked off her first week on Dancing with the Stars with a score of 25 for her contemporary dance, ending up second on the first week's leaderboard.

33. Bure did not receive a single 10 from any judges for any of her individual dances with Ballas until the semifinals.

34. Cameron Bure has written a book Reshaping It All: Motivation for Physical and Spiritual Fitness, published in January 2011, which was a New York Times best seller.

35. She wrote another book titled Balancing It All: My Story of Juggling Priorities and Purpose, published in January 2014.

36. She wrote again under the title and Dancing Through Life: Steps of Courage and Conviction, published in August 2015.

37. In a September 2015 interview, Bure said that her latest book reveals more personal issues than the others.

39. Bure and her husband were first introduced at a charity hockey game by her Full House co-star Dave Coulier.

40. Cameron Bure and her husband have three children: daughter Natasha and sons Lev, and Maksim.

41. Cameron Bure became a born again Christian in her 20s.

42. She credits her faith as the binding force in her marriage.

43. She has revealed she suffered from bulimia nervosa in her early twenties.

44. Her acting career started at the age of five.

45. When she met her husband she asked him for a signed jersey and then they exchanged the numbers.