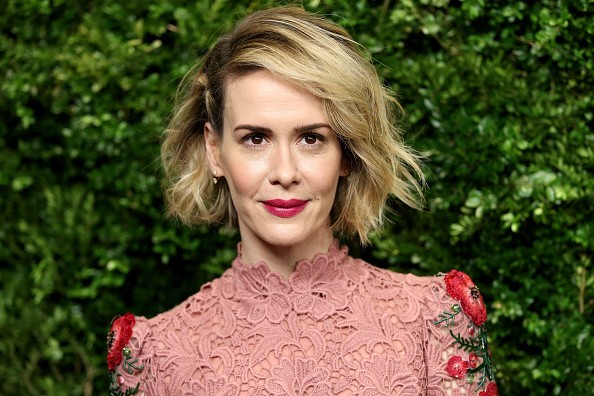 Paulson won a second Critics' Choice Television Award and received a nomination for Primetime Emmy Award for Outstanding Supporting Actress in a Miniseries or Movie for the fourth season of American Horror Story. Learn 45 facts about actress Sarah Paulson.

2. She lived in South Tampa until she was 5, when her parents divorced.

3. She spent time in Maine, before moving to New York City 5 with her mother.

4. She lived in Queens and Gramercy Park, before settling in Park Slope, Brooklyn.

5. She spent her summers in Florida visiting her father.

7. Her middle name is Catharine.

8. Began acting on stage, and in the 1990s starred in American Gothic, and Jack & Jill.

9. She later appeared in comedy films such as What Women Want and Down with Love.

10. She had dramatic roles in Path to War and The Notorious Bettie Page.

12. For her role of Harriet Hayes she received a Golden Globe Award nomination.

13. In 2008, she starred as Ellen Dolan in the superhero noir film The Spirit.

14. Paulson appeared in the Broadway plays The Glass Menagerie and Collected Stories.

15. She also starred in a number of made-for-television movies and independent films, and had a leading role on the ABC comedy series Cupid in 2009.

16. She later starred in the independent drama Martha Marcy May Marlene.

17. She received Emmy and Golden Globe nominations for her performance as Nicolle Wallace in the HBO movie Game Change.

18. In 2011, Paulson began starring in the FX anthology series American Horror Story, playing different characters in each of the show's five seasons.

19. For her performance in the second season ofAmerican Horror Story she won the Critics' Choice Television Award for Best Supporting Actress in a Movie/Miniseries and was nominated for a Primetime Emmy Award in 2013.

20. Also in 2013, Paulson starred as Mary Epps in the Oscar-winning historical drama 12 Years a Slave, for which she received critical acclaim.

21. She was nominated for a Primetime Emmy Award for Outstanding Lead Actress in a Miniseries or a Movie for the third season of American Horror Story in 2014.

22. In 2015 Paulson won a second Critics' Choice Television Award and received a nomination for Primetime Emmy Award for Outstanding Supporting Actress in a Miniseries or Movie for the fourth season of American Horror Story.

23. Paulson began working as an actress right out of high school.

24. She appeared in the Horton Foote play, Talking Pictures, at the Signature Theatre, and an episode of Law & Order in 1994.

25. Paulson did Friends at Last, a Hallmark movie of the week opposite Kathleen Turner.

26. She went to North Carolina to appear on the short-lived cult television series American Gothic.

28. Paulson had a minor role in the HBO series Deadwood and was a focal character in an episode of the critically acclaimed FX series Nip/Tuck.

29. She appeared on the short-lived NBC series Leap of Faith as the main character.

31. Paulson starred in a revival of The Glass Menagerie on Broadway and has appeared Off-Broadway in Killer Joe, and Colder Than Here.

32. Paulson's movie credits include Down with Love, What Women Want, The Other Sister, Levitation, and Serenity.

33. To date, her role of Harriet Hayesth is is her most notable role.

34. In February 2010, Paulson portrayed the circa 1982 mother of main character Meredith Grey, on the hit ABC primetime drama Grey's Anatomy.

35. She played Nicolle Wallace in the HBO film Game Change, based on events of the 2008 U.S. presidential election campaign.

37. Paulson returned for season two, American Horror Story: Asylum, in which she played a new character, Lana Winters, a writer who is committed to an asylum for being gay.

38. She appeared in the third season of the series, titled American Horror Story: Coven as Cordelia Foxx, a witch who runs an academy for other young witches.

41. Paulson has also had a successful theatre career.

42. In 2005, she starred as Laura Wingfield in a revival of Tennessee Williams' play The Glass Menagerie alongside Jessica Lange, Josh Lucas, and Christian Slater.

44. Paulson starred in a revival of Lanford Wilson's Talley's Folly alongside Danny Burstein in 2013.

45. She is a big fan of playwright Tracy Letts.