45 facts about Carrie-Anne Moss known for her role as Trinity in The Matrix
Share Tweet Email 0 Comments
NEXT> 50 facts about actor Dennis Quaid
Sunday, January 26, 2020
STAY CONNECTED WITH US 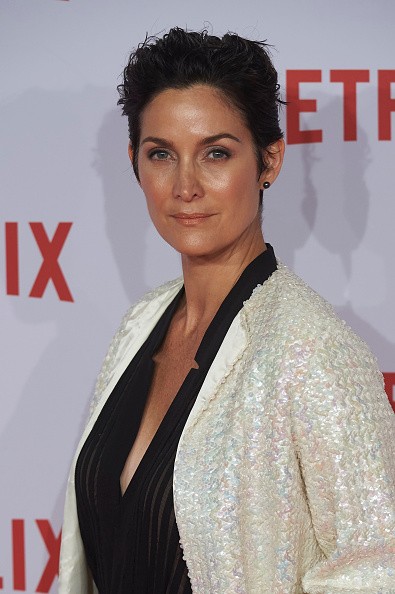 Learn 45 facts about actress Carrie-Anne Moss who portrayed Trinity in The Matrix.

1. Carrie-Anne Moss came to Los Angeles to pursue a career in acting.

2. Over the last 20 years, her work in the entertainment industry included roles in acclaimed films such as The Matrix and Memento.

3. She found the greatest joy in her marriage and motherhood.

4. Her desire is to "live in a world where nourishment is valued. I believe a nourished family will lead to a nourished world. I believe life is beautiful and that our divine purpose in this world is to nurture the earth by respecting it and being grateful for what it provides us. My wish is to inspire others to create beautiful, honest and satisfying lives. I am passionate about my role as a wife and mother, seeking deep and truthful connection with my husband and children. I am passionate about education, not just of the mind, but also of the soul. I cherish my family. I am fierce in the protection of them. I seek to raise my children to be present and to value the nourishment they are given and pass it on to the next generation. I advocate for sacred motherhood by encouraging other mothers to connect with their families. Nourishing my family brings me true contentment. Keeping an open heart is key to cultivating an inspirational, nourishing life that leads to seeing sacred womanhood through eyes of grace."

5. Moss dreams of creating a community of women sitting around a wood table-tea in hand-crafting lives that inspire and uplift others.

6. She loves masala chai made by her husband in the morning.

7. She enjoys bedtime & in-the-dark conversations with her children.

8. She likes to inspire others to see something differently.

9. She likes to eat mung beans and rice, because it's healthy comfort food and makes her feel nourished just making it.

10. She enjoys Kundalini yoga as taught by Yogi Bhajan.

12. Her favorite blogs include SouleMama, Mystic Mamma, and Danielle LaPorte.

14. She likes to read. Her favorite books are Katrina Kennison-The Gift of an Ordinary Day, Ram Das-The Only Dance There Is, Clarissa P. Estes-Women Who Run With the Wolves.

15. She considers her sacred thriving family, relationship to her husband, and her acting career for her highest achievements.

16. She likes to date her husband! Her favorite date with her husband is simple: on the couch talking about life.

17. Her favorite afternoons looks like this: steaming hot tea, beautiful music, journal in her lap, soup on the stove, kids flying about, nowhere to go.

18. You can learn more about Moss at her website www.annapurnaliving.com.

21. Carrie-Anne Moss is a Canadian actress.

22. She is best known for her role of Trinity in The Matrix trilogy of films beginning with the sci-fi action film The Matrix, her breakthrough film.

23. She has starred in the neo-noir-psychological thriller film Memento, directed by Christopher Nolan, the sci-fi thriller Red Planet, and the romantic drama Chocolat, the indie drama Snow, the Hitchcockian mystery horror-thriller film Disturbia and the controversial suspense thriller Unthinkable.

24. Carrie-Anne Moss was born in Burnaby, British Columbia, to Melvyn and Barbara Moss.

25. She has an older brother, Brooke.

26. Moss' mother reportedly named her after The Hollies' 1967 hit song, "Carrie Anne", which had been released in May that year.

27. Moss lived with her mother in Vancouver as a child.

28. At the age of 11, she joined the Vancouver children's musical theatre and later went on to tour Europe with the Magee Secondary School Choir in her senior year.

29. While in Spain, Moss landed a role in the drama series Dark Justice, her first television appearance.

30. She moved from Barcelona to Los Angeles, California with the series in 1992.

31. She enrolled at the American Academy of Dramatic Arts in Pasadena.

32. She starred in Fox's short-lived prime time soap opera Models Inc., a spin-off of Melrose Place, as a model.

33. Following the release of The Matrix, Moss starred opposite Burt Reynolds and Richard Dreyfuss in the Disney mobster comedy The Crew.

34. She starred with Val Kilmer in Red Planet for Warner Bros.

35. She starred with Guy Pearce in the thriller Memento for which Moss earned an Independent Spirit Award for her performance.

39. Moss and Roy have two sons and a daughter.

40. At age eleven she joined the Vancouver children's musical theatre.

41. She worked as a model in Europe before her acting career.

42. Moss did stunt work on The Matrix.

44. For her wall flip scene in The Matrix, Moss trained with padded walls. When it comes to filming the scene she was supposed to do the stunt in one take.

45. Her role of Trinity was initially offered to Janet Jackson, but she turned the role down.