50 facts about Hayden Panettiere: known for her roles on the NBC series Heroes and in the ABC musical drama series Nashville
Share Tweet Email 0 Comments
NEXT> 50 facts about mixed martial artist, judoka, and actress Ronda Rousey
Monday, February 24, 2020
STAY CONNECTED WITH US

50 facts about Hayden Panettiere: known for her roles on the NBC series Heroes and in the ABC musical drama series Nashville 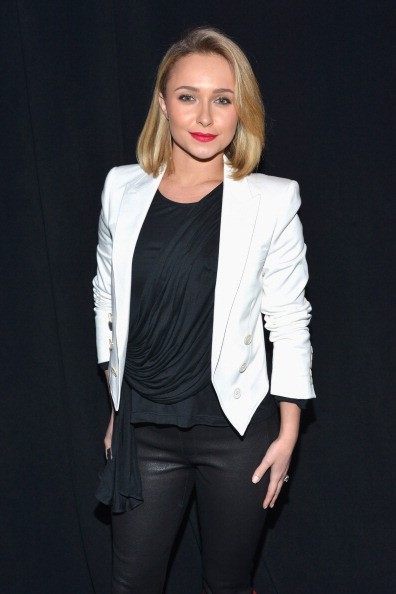 1. Panettiere was born in and partly raised in Palisades, New York.

2. She is the daughter of Lesley R. Vogel, a former soap opera actress.

3. Her father is Alan Lee "Skip" Panettiere, a fire captain.

4. She has one younger brother Jansen Panettiere.

5. Her brother is also actor.

6. Panettiere has Italian and German ancestry.

7. Her surname means "baker" in Italian.

9. Her mother's family lives in Indiana.

10. After Panettiere attended South Orangetown Middle School in New York, she was homeschooled from grade nine to the completion of high school.

11. Her middle name is Leslie.

12. She is an actress, model, singer, and activist.

13. She is known for her roles as cheerleader Claire Bennet on the NBC series Heroes, Juliette Barnes in the ABC musical drama series Nashville and Kairi in the video game series Kingdom Hearts.

14. A native of New York, she first appeared in a commercial at the age of 11 months.

15. She began her acting career by playing Sarah Roberts on One Life to Live, and Lizzie Spaulding on Guiding Light, before starring at age 10 as Sheryl Yoast in the Disney feature film Remember the Titans.

16. Other notable roles include her portrayal of the title character in the true crime drama Amanda Knox: Murder on Trial in Italy and Kirby Reed in the slasher film Scream 4.

17. She received two nominations for the Golden Globe Award for Best Supporting Actress - Series, Miniseries or Television Film, for her work on Nashville in 2012 and 2013.

18. While on Guiding Light, Panettiere's character Lizzie battled leukemia. For drawing the attention of daytime viewers to the disease, and for improving national awareness, the Leukemia & Lymphoma Society gave her its Special Recognition Award.

19. For her performance in Lifetime Television's 1999 TV movie If You Believe, she was nominated for the Young Artist Award for Young Actress Age Ten or Under in the category of Best Performance in a TV Movie or Pilot.

20. Panettiere appeared on Fox's Ally McBeal as the title character's daughter, played the daughter of a man transitioning to female in HBO Films' Normal, had a recurring guest role on Malcolm in the Middle and guest starred in Law & Order: Special Victims Unit in two different roles.

21. In 2004, Panettiere had her first starring role in the Disney Channel film Tiger Cruise.

22. Panettiere became most prominent as Claire Bennet in the NBC series Heroes, which was created by Tim Kring, as a high school cheerleader with regenerative healing powers.

23. Thanks to her role on Heroes, she became a regular on the science fiction convention circuit, invited to attend conventions around the world in 2007, including Gen Con, New York Comic Con, and Fan Expo Canada.

24. Panettiere has complained that her acting options are sometimes limited because "people look at [her] as either the popular cheerleader type or just the blonde".

25. In early 2007, Panettiere appeared on the MTV show, Punk'd. The appearance was engineered by her mother and involved a male "fan" discussing her work with her, instigating a jealous reaction from the man's spouse. In April 2012, she hosted an episode of the new series.

26. Panettiere made her feature film debut with 1998's A Bug's Life, but her first film to actually be released was the same year's The Object of My Affection, in which she appears briefly as a mermaid in the school play in the opening scene.

27. In 1999, she portrayed the girl on a sinking sailboat in Message In A Bottle.

28. In 2004, she played Kate Hudson's adolescent niece in Raising Helen.

29. In 2005, she was the title character's rival in a skating contest in Ice Princess. In the same year she played the main (human) role in the film Racing Stripes as budding jockey Channing Walsh.

30. She subsequently starred in 2006's Bring It On: All or Nothing as a cheerleader and had a supporting role as Adelaide Bourbon in the 2007 independent film Shanghai Kiss.

31. In June 2007, she signed with the William Morris Agency, after previously being represented by the United Talent Agency.

33. In 2008, Panettiere appeared in the drama Fireflies in the Garden as a younger version of Emily Watson's character, Jane Lawrence.

34. In September 2008, she appeared in a satirical video, a mock-PSA (public service announcement) on funnyordie.com titled "Hayden Panettiere PSA: Your Vote, Your Choice".

36. In 2004, she recorded a song entitled "My Hero Is You" with a video for the Disney Channel film she starred in, Tiger Cruise, and "Someone Like You," a duet with Watt White for another film, The Dust Factory (also with an accompanying video).

37. She recorded a song entitled "I Fly" for the Disney film Ice Princess in which she also co-starred.

38. She recorded a song for the Hollywood Records compilation Girl Next and another song entitled "Go to Girl" for Girl Next 2.

39. Also in 2007, she recorded a cover for "Cruella De Vil" for DisneyMania 5, "Try" for the Bridge to Terabithia soundtrack and a ballad called "I Still Believe" for Cinderella III: A Twist in Time.

40. Panettiere's first single, "Wake Up Call", was digitally released on August 5, 2008. The clothing brand Candie's announced that it was premiering an ad campaign for the single in late July.

41. She has recorded several songs for Nashville, which were released as singles and included on the show's soundtrack albums.

42. In 2013, Panettiere recorded a version of "The Fabric of My Life" for a Cotton Incorporated campaign.

44. In February 2008, Kohl's announced that Panettiere would be their next Candie's spokesperson.

45. In 2009, Panettiere was one of the celebrities featured in the coffee table book Room 23, produced by Diana Jenkins and photographed by Deborah Anderson.

47. She met former heavyweight world champion boxer Wladimir Klitschko in 2009 at the book launch party for mutual acquaintance Diana Jenkins' Room 23 (both appeared in the book), and they soon began dating.

48. Panettiere was ringside for Klitschko's knockout victory over Samuel Peter on September 11, 2010.

49. In October 2013, she announced her engagement to Klitschko.