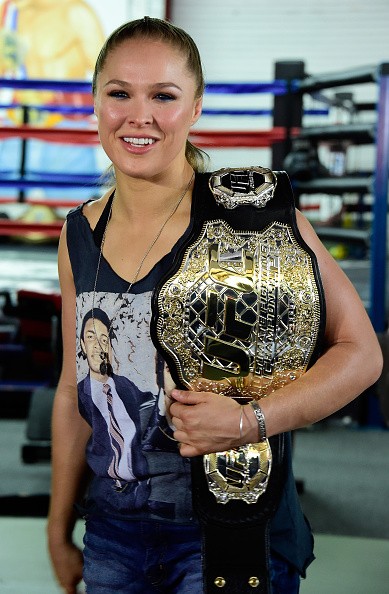 Get to know Ronda Rousey better through 50 facts about her.

1. Rousey is the youngest of three daughters.

2. She was named after her father Ron Rousey.

3. Her mother had a decorated Judo career and was the first U.S. citizen to win a World Judo Championship.

4. Her maternal grandfather was Venezuelan, and was of part Afro-Venezuelan ancestry. Her other ancestry includes English and Polish.

5. Her stepfather is an aerospace engineer.

6. Her biological father, having broken his back sledding with his daughters and having learned that he would be a paraplegic, committed suicide in 1995, when Rousey was eight years old.

7. Her mother AnnMaria pursued her Ph.D. in educational psychology at the University of California, Riverside as her daughters grew up.

8. For the first six years of her life, Rousey struggled with speech and could not form an intelligible sentence due to apraxia, a neurological childhood speech sound disorder.

9. Her previous speech disorder was attributed to being born with her umbilical cord wrapped around her neck at birth.

10. When Ronda was three years old, her mother and father moved from Riverside, California, to Jamestown, North Dakota, to obtain intensive speech therapy with specialists at Minot State University.

11. Rousey dropped out of high school and later earned a G.E.D.

12. She retired from her judo career at 21 and started her MMA career at 22 when she realized that she did not want to spend her life in a conventional field of work.

14. She is a mixed martial artist, judoka, and actress.

16. She has won eleven of her fights in the first round, nine of them by armbar.

17. Rousey was the first U.S. woman to earn an Olympic medal in judo (Bronze) at the Summer Olympics in Beijing in 2008.

18. Rousey trains under Gokor Chivichyan of the Hayastan MMA Academy, and Edmond Tarverdyan of the Glendale Fighting Club.

19. As of November 29, 2015, Rousey is ranked the #2 female bantamweight fighter in the world according to the Ultimate Fighting Championship (UFC), Sherdog and Fight Matrix.

21. In May 2015, two magazines ranked Rousey as the most dominant active athlete.

22. Rousey was voted on an ESPN poll as the Best Female Athlete Ever.

23. In September 2015, she revealed on The Ellen DeGeneres Show that she is currently the UFC's highest paid fighter, male or female.

26. Rousey made her mixed martial arts debut as an amateur on August 6, 2010. She defeated Hayden Munoz by submission due to an armbar in 23 seconds.

27. A decorated judoka, Rousey typically grounds an opponent with tosses and sweeps, then seeks to finish with strikes or submissions. From top position, she usually attacks with punches from side control; in rear position, she often secures a back mount and attacks with head strikes.

28. Rousey is right-handed, but is a left-handed judoka fighting in an orthodox stance as a striker.

29. Rousey is well known for her skill in grappling, and is particularly noted for her string of victories by armbar.

30. While discussing her signature armbar in an interview, Rousey noted that her judoka mother jumped on her every morning to wake her up with armbars.

31. Rousey is notable for introducing trash talking to Women's MMA. In many interviews Rousey has used harsh language and openly downplayed the abilities of her opponents, which she explains as a way to generate more publicity for the sport.

32. Rousey appeared nude on the cover of ESPN The Magazine's 2012 Body Issue and in a pictorial therein. Touching upon the strategic cropping, poses, and arm placement used in the photos to make them less revealing, Rousey explained: "With all these ring girls and their vaginas - all of this goes back to advice my mom gave me. She gave me this one piece of advice, which I still hold dear. She said, 'Look, whatever pictures you put out there are gonna be out there forever, so just think that one day your 12 or 13-year-old son or daughter is going to see those pictures. Whatever you want your son or daughter, or even your 13-year-old little sister to see, keep that in mind.' So, whatever I'm not gonna show on a beach, I'm not gonna show in a magazine. These girls are going to have to explain to their kids one day why mommy's ass and vagina are all over the place."

33. In September 2015, it was announced that Rousey would star in a reboot of Road House.

34. Rousey was formerly a vegan.

35. She originally opposed using the nickname her friends gave her, "Rowdy", feeling it would be disrespectful to professional wrestler "Rowdy" Roddy Piper. After meeting Piper through Gene LeBell, who helped train both of them, Piper personally gave his approval.

36. Rousey dedicated her successful title defense at UFC 190 to Piper, following his death on the previous day.

38. Rousey is an avid fan of professional wrestling, Dragon Ball Z, and Pokémon.

39. She also plays World of Warcraft.

40. Rousey has had a range of commercial partnerships, including mobile network operator MetroPCS, insurance agency Insureon, Reebok, and Carl's Jr.

41. In 2015, she raised money for the Black Jaguar White Tiger Foundation, whose goal is to save big cats from circus and zoos and provide them with the best lifestyle, by auctioning signed T-shirts.

44. Rousey has discussed how she dealt with body image in the past and her struggle with it. She explained, "When I was in school, martial arts made you a dork, and I became self-conscious that I was too masculine. I was a 16-year-old girl with ringworm and cauliflower ears. People made fun of my arms and called me 'Miss Man'. It wasn't until I got older that I realized: these people are idiots. I'm fabulous."

45. Rousey has a perfect 3-0 record in amateur MMA competition, and the combined duration of all her amateur fights is under 2 minutes.

46. Rousey made her professional mixed martial arts debut on March 27, 2011 at King of the Cage: Turning Point. She submitted Ediane Gomes with an armbar in 25 seconds.

47. Rousey faced kickboxing champion Charmaine Tweet in an MMA bout at Hard Knocks Fighting Championship: School of Hard Knocks 12 on June 17, 2011 in Calgary, Canada. She submitted Tweet with an armbar in 49 seconds.

49. She also appeared on the cover and in a pictorial of the September 2013 issue.

50. In 2015, Rousey became the first woman featured on the cover of Australian Men's Fitness, appearing on their November edition.