50 facts about Gaby Hoffmann
Share Tweet Email 0 Comments
NEXT> 50 facts about Liam Payne of One Direction
Monday, February 17, 2020
STAY CONNECTED WITH US 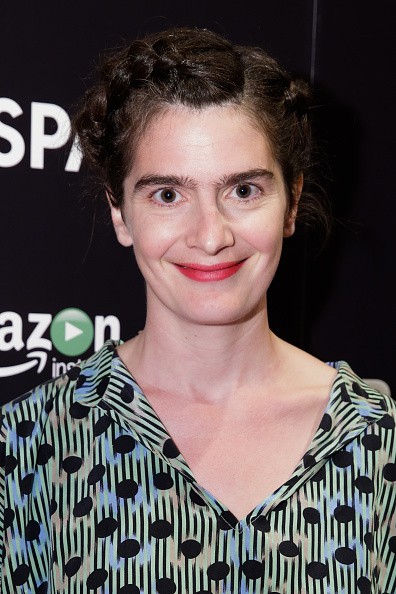 50 facts about actress Gaby Hoffmann, best known for her roles on Transparent and Girls.

2. Her mother, Viva is an actress, writer and former Warhol superstar.

3. Her father, Anthony Herrera, was a soap actor best known for his role as James Stenbeck from As the World Turns.

4. Viva and Herrera were estranged shortly after Hoffmann's birth; she was raised by her mother at the Chelsea Hotel in New York. Her father did not have a significant presence in her life.

5. Hoffmann's birth is documented in Brigid Berlin's The Andy Warhol Diaries. An entry dated January 10, 1982, two days after Hoffmann was born, says that a friend of Warhol's telephoned Warhol and told him that they were going to the Chelsea Hotel to see Viva and her new baby.

6. Hoffmann's mother was raised in a devout Catholic family on Long Island, the daughter of a well-known attorney.

7. Her mother was previously married to director Michel Auder in 1969, and Hoffmann has a half-sister, Alexandra "Alex" Auder, who is 11 years older.

8. Her half-sister Auder is a yoga teacher in New York City.

9. Hoffman's biological father was raised in Wiggins, Mississippi by his own maternal grandparents.

10. Hoffmann attended P.S. 3 on Hudson Street in the West Village, then another school in Hell's Kitchen.

11. After she moved to Los Angeles in 1994, she attended the prestigious Buckley School, before finally graduating from Calabasas High School in 1999.

13. She is best known for her roles on Transparent and Girls.

15. Additionally, she is remembered as a child actress from the films Field of Dreams, Uncle Buck, Now and Then, and Volcano.

17. According to Hoffmann, she and her best friend Talya Shomron would roller-skate in the hallways, spy on the drug dealer across the hall, and persuade the bellman to go to the neighborhood deli at night and get them ice cream.

18. On her childhood: "I grew up in downtown New York in the '80s. I have a friend who grew up with me, and she puts it well. She says, 'If you grew up where we grew up, if you weren't an artist, a drag queen, queer, or a drug addict, then you were the freak.' I grew up in a world where I guess what is considered unusual or abnormal for the rest of America was very much considered the norm."

19. When Hoffmann was 11, after leaving the Chelsea, Hoffmann and her mother moved to the west coast to a two-bedroom rented house in Woodland Hills, Los Angeles, California which ended up being badly damaged in the January 17, 1994 Northridge earthquake.

20. While regrouping their living situation, Gaby and her mother temporarily lived at The Oceana Suites Hotel in Santa Monica.

21. After she graduated from Calabasas High School in 1999, Hoffmann followed her half-sister's example and entered New York's Bard College to pursue a degree in literature.

22. Starting in 2001, she put her acting career on hold to complete her studies.

24. She interned with a chef in Italy, and then trained to be a doula after helping deliver her sister Alex's children.

25. For a time, Hoffmann and a boyfriend lived in an old trailer in the Catskills.

26. Hoffmann began her acting career at the age of four to help pay the family bills by acting in commercials.

27. However, she grew tired of the rigorous schedules and temporarily retired from acting.

28. Nevertheless, upon hearing that Macaulay Culkin was making a lot of money from his movies her "competitive spirit got the best of her," as she later put it, and she re-entered the profession.

30. She strred in 1989's Uncle Buck with John Candy (as well as Macaulay Culkin) and then went on to star in This Is My Life, Sleepless in Seattle with Tom Hanks and The Man Without a Face with Mel Gibson.

31. According to Hoffmann, it was the praise she received for her performance in This is My Life which encouraged her to pursue a full-time acting career in Hollywood as it gave her the confidence she needed to handle major roles.

32. Between 2003 and 2007, Hoffmann largely concentrated on a theatre career in New York. Roles included 24 Hour Plays, The Sugar Syndrome, and Third.

34. She also appeared in the Broadway play Suburbia, alongside Kieran Culkin and Jessica Capshaw at the Second Stage Theatre on 43rd Street in New York City, which ran from September to October 2006.

35. Hoffmann then returned to the 24 Hours Plays where she acted alongside Jennifer Aniston.

36. In 2013, she completed work on the lead role of a Web series entitled Lyle, created by Stewart Thorndike and Jill Soloway. It was shot in NYC.

37. She subsequently acquired an apartment in Brooklyn's Fort Greene section.

38. In October 2013, she starred in the 1910s installment of Vanity Fair's The Decades Series, "The First March", directed by Gilly Barnes.

39. In 1994, Hoffmann was given the starring role in her own sitcom Someone Like Me (on NBC) about a young girl, Gaby, and her dysfunctional family. Although generally well received, the show only lasted six episodes.

40. After Someone Like Me, Hoffmann won the lead role in the TV film Freaky Friday, a remake of the 1976 film of the same name starring Jodie Foster and Barbara Harris.

41. In 1995, Hoffmann played Andrea Eagerton in the CBS TV film Whose Daughter Is She?

42. In the same year as Freaky Friday, Hoffmann starred in the coming-of-age comedy, Now and Then, with her older counterpart played by Demi Moore. She played as Young Samantha.

43. Between 1996 and 2000, Hoffmann landed roles in several films including Everyone Says I Love You, Volcano, Snapped, The Hairy Bird, 200 Cigarettes, Coming Soon, Black & White, You Can Count on Me, and Perfume.

44. In 2007, she starred in the film Severed Ways: The Norse Discovery of America.

45. In 2008, she appeared in Guest of Cindy Sherman, a documentary on art-scene commentator Paul Hasegawa-Overacker's relationship with enigmatic photographer Cindy Sherman.

46. Later in 2008, Hoffmann appeared in the documentary Chelsea on the Rocks, which is a tribute to the Chelsea Hotel where she grew up. Directed by Abel Ferrara, the documentary highlights the many personalities and artistic voices that have emerged from the legendary residence.

47. Hoffmann has discussed her full frontal nude scenes in a few of her recent projects including Crystal Fairy, Girls and the Amazon series Transparent. On nudity, Hoffmann said: "People are obsessed with actresses being hairless, fatless Barbie dolls. They can't imagine that people would want to be anything other than that. When they are, it's looked at as almost a political statement. Look at Lena Dunham. She is a gorgeous woman and people can't stop talking about how brave she is to show herself naked, which I find totally condescending and ridiculous. If Angelina Jolie was naked onscreen no one would say she was brave. The implication is that Lena's brave because she doesn't look the way she's supposed to look. I think that's a shame."

48. Jill Soloway wrote the role Hoffmann plays in Transparent for her after seeing her performance on Louis C.K.'s third season of Louie.

50. She lives in the Fort Greene neighborhood of Brooklyn.