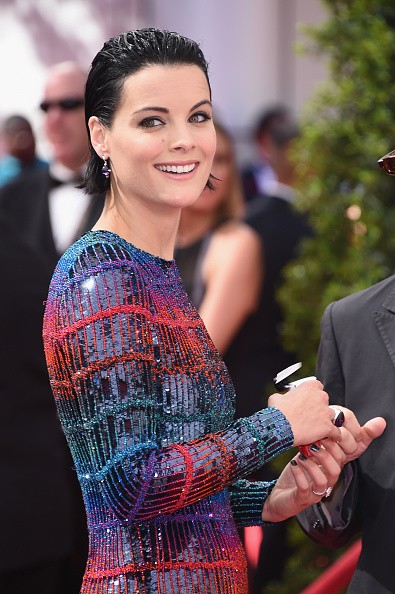 1. Tells that she got into acting by accident. "Yeah, actually it was kind of by accident. A friend of mine was really sick and she paid a scouting agency to do this like, little runway show . We were the same size, same height, I was just brunette. So I go to this runway show, they said, you know, "Do you have a monologue?" And I said, "What's that?" And they laughed at me. I got onstage and recited a commercial, and in the audience was my manager today. And he was actually there filling in for one of his wife's friend, and he's a pretty famous manager up here in L.A. That's how that happened. I come from a family of five kids and I knew I was last up to go to college, and I said I'll just try it, and it's kind of been my thing ever since."

2. Jaimie Alexander is known for portraying Jessi on the TV series Kyle XY.

5. She currently stars in the NBC series Blindspot.

7. Moved to Grapevine, Texas when she was four years old.

9. She also has other four siblings, all of them are boys.

10. Alexander first got into acting in grade school, where she took theater for fun.

11. Alexander stated that she was actually kicked out of theater when she was in high school because she could not sing.

12. When she was kicked out of theater because she couldn't sing she instead went into sports.

13. When she was 17, she substituted for a friend at a meeting with a scouting agency and she met her manager, Randy James, who sent her some scripts.

14. After her graduation from Colleyville Heritage High School, a year and a half later, she moved to Los Angeles to pursue acting.

15. Her career was launched in 2003, when she was cast in the leading role of Hanna Thompson in the low budget award-winning film The Other Side.

16. According to the movie's commentary (The Other Side), she was originally at the audition to help out by reading against the male actors.

17. Director of The Other Side, Gregg Bishop decided to cast her in the leading role after hearing her perform the lines.

18. Alexander's second role was in the movie Squirrel Trap where she played Sara, the love interest of the main character, David, who is a socially introverted genius portrayed by Keith Staley.

19. She had a guest appearance in It's Always Sunny in Philadelphia, where she portrayed a femme fatale in the role of 'Tammy', who through a combination of seduction and threats manipulates one of the main characters.

20. She also has a small part in an episode of Standoff.

21. She proceeded to more significant roles when she appeared in the series Watch Over Me where she portrayed the controversial character of 'Caitlin Porter'.

22. In 2006, she had her first lead role in the horror film Rest Stop where she portrayed 'Nicole Carrow', a girl who escapes from home and goes on a trip with her boyfriend, which is unexpectedly interrupted at a rest stop by a deranged serial killer.

24. In Hallowed Ground she played 'Elizabeth Chambers', a girl stranded in a small town inhabited by a sect that plans to use her as a vessel for the rebirth of their founder. In both movies, her character is a strong character who fights back against her aggressors.

25. Her most famous role so far was that of 'Jessi' on the ABC Family television show Kyle XY. She portrays a troubled, show off girl with superhuman powers who is trying to find her way in the world, with increasing cooperation and eventual romance with her male counterpart Kyle.

26. Her role of 'Jessi' generated a large fan base hoping to see a spin-off show for her character.

27. She also has had guest roles on the show CSI: Miami where she played 'Jenna York', a flight attendant involved in a murder case; and in Bones where she played 'Molly Briggs', a student connected to the victim of the episode.

28. In July 2010, it was reported that Alexander had been cast in the independent comedy-drama film, Loosies co-starring Peter Facinelli and directed by Michael Corrente.

29. In October 2010 it was reported that Alexander joined the cast of Nurse Jackie in a sizeable story arc as Jackie's (Edie Falco) wild, immature sister-in-law, Tunie Peyton.

30. In 2011, she joined the cast of Covert Affairs for three episodes of the second season.

32. Also in 2013, she portrayed deputy sheriff Sarah Torrance in The Last Stand, alongside Arnold Schwarzenegger.

33. In 2015, Alexander began starring as Jane Doe in the NBC series Blindspot.

34. Alexander has done a photo shoot with her co-star Matt Dallas from Kyle XY for the photographer Tyler Shields.

35. She also appeared in a Matthew Perryman Jones music video of the song "Save You" released in September 2009.

36. In 2010, Alexander appeared in a web series for MSN entitled Ultradome produced by MiloVentimiglia. In the series Alexander portrayed Han Solo in battle against Indiana Jones for the title of best Harrison Ford character.

37. In 2011, Alexander reunited with writer/director Gregg Bishop for The Birds of Anger for NBCUniversal G4Films. The film was based on the best-selling mobile game, Rovio's Angry Birds, told in the style of the 1963 film The Birds by Alfred Hitchcock.

39. Alexander and Facinelli met on the set of Loosies.

41. While in high school she was on a wrestling team.

42. She was raised in Grapevine, Texas.

43. She had three older brothers and one younger brother.

44. She enjoys riding a motorcycle.

46. Painting, cooking and spending time with friends are her favorite things to do in her free time.

47. She did all of the stunts in the movie Hallowed Ground.

48. She doesn't use to prepare for her roles in film. "I'm probably one of the worst actors as far as preparation goes, because I actually don't prepare. I find it easier to read the script and whatever hits me in my stomach, like deep down, I just go with it. And the director kind of molds me whether to go right or left with it."

49. Her favorite genre is horror.

50. Considers horrors as a challenging movie to make. "It is very challenging and takes more energy than most people would think."