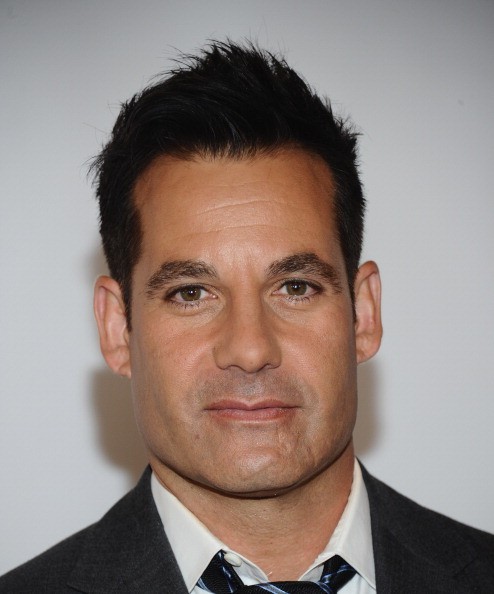 Pasdar has a tattoo of an anchor on his arm. His children's names are written on it. It symbolizes that his family is his anchor and support in life. Learn 50 interesting things about actor Adrian Pasdar.

2. He is known for playing Jim Profit on the TV series Profit.

3. He is also known for his roles in Near Dark, Carlito's Way, Mysterious Ways and as Nathan Petrelli on Heroes.

5. Pasdar is the voice of Iron Man in Marvel Anime.

6. He is also the voice in the animated series, Ultimate Spider-Man and Avengers Assemble.

7. He played Alec Rybak, district attorney on The Lying Game.

8. Pasdar was born in Pittsfield, Massachusetts.

9. His father, Homayoon Pasdar, was an Iranian American immigrant.

10. His father was a cardiac surgeon, with a practice near Philadelphia.

11. His mother, Rosemarie was born in Königsberg/Kaliningrad, a city that was part of Germany until 1945, and is now a part of Russia.

12. His mother worked as a nurse before becoming an English teacher.

13. His mother was also a travel agent in France.

15. Received a football scholarship to the University of Florida to play linebacker.

17. He has a younger sister, Anamarie "Pink" Pasdar.

19. Pasdar turned his attention to campus stage productions and rediscovered an early interest in writing and acting.

20. No longer able to play football, he dropped out of school and returned home, taking a job with a theater group, People's Light and Theatre Company.

21. While wiht People's Light and Theatre Company he worked on sound and lighting as part of the stage crew responsible for set construction.

22. He had a painful accident on the set, cutting off the end of his left thumb. His resulting medical compensation paid for attendance at the Lee Strasberg Theater Institute in New York.

23. Pasdar was also selected to play a bit part as a police officer in the Dixie Chicks video for their song, "Goodbye Earl".

24. The music video he was part of won both the Academy of Country Music and the Country Music Association's Video of the Year Awards in 2000.

25. At the age of 19, he auditioned for a role in Top Gun. Director Tony Scott was so impressed that he wrote the part of "Chipper" just for him.

26. He played bigger roles in Solarbabies, Streets of Gold, and Kathryn Bigelow's cult vampire movie Near Dark, with Pasdar in the lead role of Caleb Colton. His other major roles include Vital Signs.

27. Pasdar got his biggest break in movies, when he starred as a beautiful woman opposite Julie Walters in the British movie Just Like a Woman.

28. In 1992, he left Hollywood and returned to New York, working as a cashier for room and board, while taking the occasional small part, such as Frankie in Brian De Palma's Carlito's Way.

29. Adrian Pasdar wrote and directed the short film Beyond Belief.

30. Directed his first feature film, the art-house neo-noir Cement, a contemporary re-telling of Othello, in 1999. The $1.7 million independent feature.

32. Pasdar's major break into television came in 1996, when he was cast as the title character on the short-lived but critically acclaimed Fox series Profit.

33. He also guest starred in the 2 hour season finale of the fourth season of Touched by an Angel, "The Spirit of Liberty Moon".

34. From 2000 to 2002, Pasdar played the lead role of Anthropology Professor Declan Dunn in the spooky cult drama series Mysterious Ways on PAX.

35. Pasdar played David McClaren in the final two seasons of the long-running CBS drama Judging Amy, from 2003 through 2005.

36. In 2006, he had a high-profile guest role as Gabrielle Solis's sleazy lawyer in Desperate Housewives.

39. Having also voiced Iron Man in the English dub of the Iron Man anime series, Pasdar reprises the role in Marvel's Avengers Assemble, Ultimate Spider-man, and Hulk and the Agents of S.M.A.S.H..

40. Pasdar also played a role on The Lying Game as Alec Rybak, a corrupt district attorney.

41. He currently plays the recurring role of Glenn Talbot on the Marvel TV series Agents of S.H.I.E.L.D.

42. He also starred in the one season screened Amazon Studios series The After.

43. Pasdar married Natalie Maines of the Dixie Chicks in June 2000.

44. The couple first met in May 1999, with Maines as a bridesmaid to her bandmate Emily Robison and Pasdar as a groomsman to his friend singer-songwriter Charlie Robison.

45. They were married in Las Vegas's Little White Wedding Chapel, in a $55 no-frills ceremony officiated by the chapel's "Pastor Ann".

47. His family lives in Los Angeles, California and Austin, Texas.

48. He has a tattoo of an anchor on his arm. His children's names are written on it. It symbolizes that his family is his anchor and support in life.

49. He also has a tattoo of the Chinese character for Strength, which he got while filming Shanghai 1920.

50. Pasdar is a guitarist for charity rock band Band from TV. Part of the proceeds from the band's concerts go to his nominated charity, the Rush Epilepsy Center.