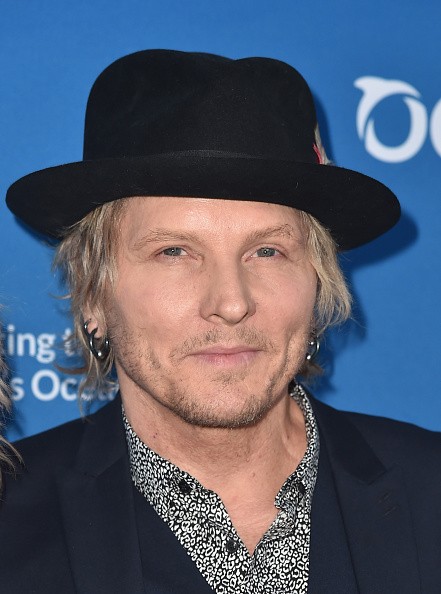 2. His parents were of English and Norwegian descent.

3. He started to play drums after watching Ringo Starr with The Beatles on The Ed Sullivan Show in 1964.

5. In his first couple of years in high school, Sorum was part of the Mission Viejo Marching Bands drum section.

6. Sorum started out in Mission Viejo as a local hot musician in 1975.

7. Wore trademark "Union Flag" shorts and nothing else.

9. A local songwriter, Stephen Douglas, pulled Sorum from the band "Prophecy," and joined him with other talented musicians, Scott Andrews on guitar and Jay Fullmer on bass, in the area to form Chateau, a wall-of-sound band with grandiose themes and sounds in their songs. They recorded their first tracks at the Doug Moody's Mystic Studios in Hollywood, once famous for Led Zeppelins 'Lemon Song'.

10. Sorum went to Hollywood to play with a series of bands, including Population Five, with the bassist Prescott Niles from The Knack. He then left on a tour around the country with a blues guitarist, playing nightclubs and bars.

11. In 1988, he was recruited to play on the debut album of Y Kant Tori Read, a band fronted by a then unknown Tori Amos. In the wake of that project, he joined The Cult as their live drummer for the 1989 tour in support of Sonic Temple.

12. He is best known as both a former member of the hard rock band Guns N' Roses, with whom he recorded three studio albums, and as a member of the supergroup Velvet Revolver.

13. Sorum is currently a member of the touring project, Kings of Chaos, and is a former member of both The Cult and Y Kant Tori Read.

17. During the tour with The Cult, Sorum was spotted by Guns N' Roses guitarist Slash and subsequently replaced their drummer Steven Adler in 1990.

19. Departed from Guns N' Roses in 1997 following an argument with frontman Axl Rose.

20. In 2001, Sorum rejoined The Cult to perform on their reunion album, Beyond Good and Evil, and its subsequent tour and subsequently co-founded the hard rock supergroup Velvet Revolver, alongside former Guns N' Roses bandmates, Slash and Duff McKagan.

21. Sorum has been a permanent member of hard rock cover band Camp Freddy since 2003, alongside Jane's Addiction members Dave Navarro and Chris Chaney and assisted in hosting its radio show and podcast on Indie 103.1.

25. In 1995 Sorum formed Slash's Snakepit with Slash and Gilby Clarke and drummed on their debut album It's Five O'Clock Somewhere.

29. In 1997 he was fired from Guns N' Roses by Axl Rose after an argument with Rose over the inclusion of Paul Tobias in the band.

30. In 1998, he released his first and only drum instructional video (Drum Licks and Tricks from the Rock n Roll Jungle) demonstrating his techniques.

31. In 2001 Matt joined The Cult once again and featured on their album, Beyond Good And Evil, which he spent most of 2001 touring in support of.

33. Sorum released his first solo album entitled Hollywood Zen, in 2003. The album, available through his website, was a musical statement about his life, touring, relationships, etc.

35. In 1994, Sorum was one of many guest drummers on the album, "Burning for Buddy: A Tribute to the Music of Buddy Rich". Playing with the Buddy Rich Big Band, Sorum was able to display his skill and finnesse as a jazz drummer.

36. In addition, Sorum has endorsed Zildjian cymbals for the past 18 years and has featured in numerous sweepstakes with Zildjian.

37. In 2006, Sorum began guest recording in his studio with a new project, called Circus Diablo.

40. Sorum was featured in episode 54 of the television program LA Ink originally airing on August 27, 2009. On the program Kat Von D. tattoos a portrait of his wife Ace on his leg.

41. Matt filled in for Mikkey Dee as drummer on Motörhead's 2009 US tour. Dee took part in Kändisdjungeln, a Swedish version of I'm a Celebrity...Get Me Out of Here!.

42. After performing together at the "Giving 2010" benefit event on May 3, 2010, Sorum formed the cover band "Carnival of Dogs" with Tracii Guns (L.A. Guns, formerly of Brides of Destruction), Franky Perez (Solo, Scars on Broadway, DKFXP) and Phil Soussan (previously played with Ozzy Osbourne, Billy Idol and Vince Neil).

43. He made an appearance in an episode of FSN Sport Science, when a test was undertaken to determine if a professional basketball point guard had faster hands than a drummer.

44. In 2014, he worded with Animals Asia and adopted a moon bear that had been on a Chinese bear-bile farm, when her bile was extracted for traditional medicine. He hoped to draw attention to the abuse that bears suffer on the farms in China and Vietnam.

45. Sorum has endorsed a number of drum companies over the last 20 years, including Yamaha Drums, Mapex, Drum Workshop, Ludwig and Gretsch Drums. He also has used Zildjian cymbals over the last 26 years.

46. Sorum was one of the first drummers to endorse the Easton Ahead sticks in the early 90s during the Guns N' Roses Use Your Illusion Tour, drum sticks which are now used by many famous drummers, including Lars Ulrich of Metallica and Tico Torres of Bon Jovi.