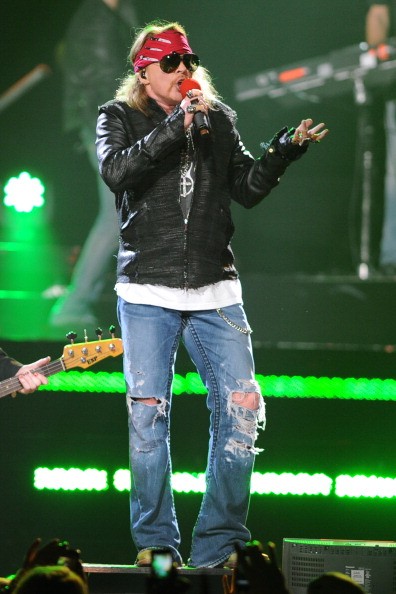 3. When he was born, his mother was 16 years old and still in high school.

4. His father is William Bruce Rose. His father has been described as "a troubled and charismatic local delinquent."

5. His parents separated when Rose was approximately two years old, prompting his father to abduct and allegedly molest him before disappearing from Lafayette.

6. His mother remarried to Stephen L. Bailey, and changed her son's name to William Bruce Bailey.

7. He has two younger siblings-a sister, Amy, and a half-brother, Stuart.

8. Until the age of 17, Rose believed that Bailey was his natural father.

9. He never met his biological father as an adult.

10. The Bailey household was very religious; Rose and his family attended a Pentecostal church, where he was required to attend services three to eight times per week and even taught Sunday school.

11. Rose later described his upbringing as oppressive, stating, "We'd have televisions one week, then my stepdad would throw them out because they were Satanic. I wasn't allowed to listen to music. Women were evil. Everything was evil."

12. Rose found solace in music from an early age.

13. He sang in the church choir from the age of five, and performed at services with his brother and sister under the name the Bailey Trio.

14. At Jefferson High School, he participated in the school chorus and studied piano.

16. He eventually formed a band with his friends, one of whom was Jeff Isbell, later known as Izzy Stradlin.

17. At the age of 17, while going through insurance papers in his parents' home, Rose learned of his biological father's existence, and he unofficially readopted his birth name.

18. However, he referred to himself only as W. Rose, because he did not want to share a first name with his biological father.

19. Following the discovery of his true family origins, Rose became the local juvenile delinquent in Lafayette; he was arrested more than 20 times on charges such as public intoxication and battery, and served jail terms up to three months.

20. He is known as the lead vocalist of the hard rock band Guns N' Roses, a position he has held since its inception in 1985.

21. Due to his powerful and wide vocal range and energetic live performances, Rose has been named one of the greatest singers of all time by various media outlets, including Rolling Stone and NME.

22. Moved to Los Angeles in the early 1980s, where he became active in the local hard rock scene and joined several bands, including Hollywood Rose and L.A. Guns.

24. Guns N' Roses' first album, Appetite for Destruction has sold in excess of 30 million copies worldwide, and is the best-selling debut album of all time in the U.S. with 18 million units sold.

25. Its full-length follow-ups, the twin albums Use Your Illusion I and Use Your Illusion II, were also widely successful; they respectively debuted at No. 2 and No. 1 on the Billboard 200 and have sold a combined 35 million copies worldwide.

26. After 1994, following the conclusion of their two-and-a-half-year Use Your Illusion Tour, Rose disappeared from public life for several years, while the band disintegrated due to personal and musical differences.

27. As its sole remaining original member, he was able to continue working under the Guns N' Roses banner because he had legally obtained the band name.

28. In 2001, he resurfaced with a new line-up of Guns N' Roses at Rock in Rio 3, and subsequently played periodic concert tours to promote the long-delayed Chinese Democracy, which undersold the music industry's commercial expectations despite positive reviews upon its release.

29. In 2012, Rose was inducted into the Rock and Roll Hall of Fame as a member of Guns N' Roses, though he declined to attend the event and requested exclusion from the HoF.

30. Shortly after his arrival in Los Angeles, Rose met guitarist Kevin Lawrence outside The Troubadour in West Hollywood and joined his band Rapidfire.

31. Formed the band Hollywood Rose with his childhood friend Izzy Stradlin, who had moved to Los Angeles in 1980, and sixteen-year-old guitarist Chris Weber. In January 1984, the band recorded a five-song demo featuring the tracks "Anything Goes", "Rocker", "Shadow of Your Love", and "Reckless Life", which was released in 2004 as The Roots of Guns N' Roses.

33. While struggling to make an impact on the Hollywood music scene, Rose held down a variety of jobs, including the position of night manager at the Tower Records location on Sunset Boulevard.

34. Rose and Stradlin also smoked cigarettes for a scientific study at UCLA for the reported wages of $8 per hour.

37. Slash left Guns N' Roses in October 1996 due to his differences with Rose.

38. As the stability of Guns N' Roses collapsed, Rose withdrew from public view.

39. The band never officially broke up, although it did not tour or perform for several years and no new material was released. Rose continued to recruit new musicians to replace band members who either left or were fired.

40. By the late 1990s, he was considered to be a recluse, rarely making public appearances and spending most of his time in his mansion in Malibu.

41. In various media reports, he was referred to as the "Howard Hughes of rock" and "rock's greatest recluse."

42. Rose was said to spend his nights rehearsing and writing with the various new lineups of Guns N' Roses, working on the band's next album, Chinese Democracy.

44. Rose lent his voice to the video game Grand Theft Auto: San Andreas, in which he adopted the persona of Tommy "The Nightmare" Smith, the radio DJ of classic rock station K-DST The Dust.

46. Rose collaborated with his longtime friend Sebastian Bach on his album Angel Down; he duetted with Bach on a cover of Aerosmith's "Back in the Saddle" and performed backing vocals on "(Love is) a Bitchslap" and "Stuck Inside", for which he was credited as a co-writer.

47. In early 1986, Rose began a relationship with model Erin Everly, the daughter of singer Don Everly of the Everly Brothers. Rose wrote the song "Sweet Child o' Mine" for Everly and Everly appeared in the accompanying music video. Rose and Everly were married on April 28, 1990 in Las Vegas.

48. Everly later claimed that Rose showed up at her house the previous day with a gun in his car and told her that he would kill himself if she did not marry him. Less than a month later, Rose first filed for divorce. The couple later reconciled, during which Everly became pregnant. She suffered a miscarriage in October 1990, which deeply affected Rose, who had wanted to start a family. Everly left Rose the following November; they annulled their marriage in January 1991.

49. In mid-1991, Rose became involved in a high-profile relationship with supermodel Stephanie Seymour. During their relationship, Seymour appeared in the music videos for "Don't Cry" and "November Rain".