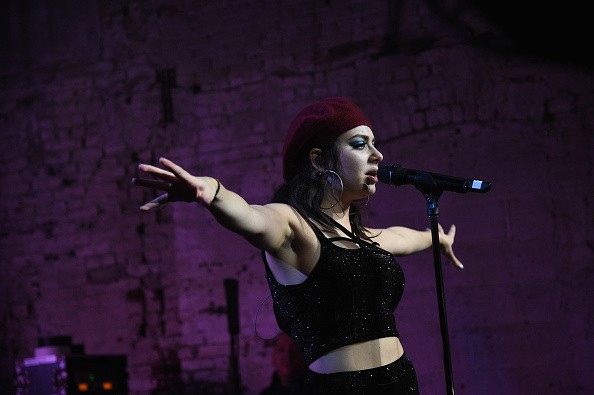 She started writing songs when she was 14 years old. Learn 48 facts about Charli XCX.

2. She is an English singer and songwriter.

5. She signed to Asylum Records in 2010 and released two mixtapes, Heartbreaks and Earthquakes and Super Ultra, in 2012.

7. She rose to international fame during 2013 and 2014 when she was featured on two major hit singles, Icona Pop's "I Love It" and Iggy Azalea's "Fancy".

8. Her 2014 single "Boom Clap" from the soundtrack album of The Fault in Our Stars became a top ten hit in a number of countries. It also preceded the release of her second album, Sucker, which featured the singles "Break the Rules", "Doing It" and "Famous". A bonus track, titled "Red Balloon" was also featured on the soundtrack to Home.

10. Her father is Scottish.

11. She has an Indian mother from Uganda.

13. Aitchison also studied at the Slade School of Fine Art in London, but left during the second year of her degree course.

14. Aitchison started writing songs when she was 14 years old.

15. Began recording an album on a loan granted by her parents.

16. In early 2008, she began posting songs from the album, as well as numerous other demos, on her official MySpace page.

17. Her MySpace page caught the attention of a promoter running numerous illegal warehouse raves and parties in east London, who invited her to perform.

18. Aitchison was billed on flyers under the stage name Charli XCX, her MSN Messenger screen name when she was younger.

19. Despite the illicit nature of the gigs, her parents were supportive of her career and attended several raves with her.

21. After being signed to Asylum Records in 2010, she took a break from music in what she describes as a "lost" period.

22. In May 2011, she released the single, "Stay Away", followed by "Nuclear Seasons" in November. Both tracks were produced by Ariel Rechtshaid and released exclusively in the United Kingdom.

23. "Stay Away" and "Nuclear Seasons" singles gained attention from music website Pitchfork Media, where she earned the Best New Track accolades for both tracks, with the former being ranked on their Best Tracks of 2011 list.

24. In May 2012, Charli XCX released her first mixtape, Heartbreaks and Earthquakes, a one-track file consisting of eight songs.

25. She supported Santigold and Coldplay on tour.

26. Her second original mixtape, Super Ultra, was released exclusively through her website in November 2012.

27. Charli XCX co-wrote and contributed vocals to the 2012 single "I Love It", which was recorded by Swedish pop duo Icona Pop and became a breakthrough hit for both acts in 2013 after her newfound relationship with Joey Tuzak.

30. Charli XCX's debut studio album, True Romance, was released in April 2013, following the single, "What I Like". This is what she said of the album: "Every corner of my own romantic history is explored on this record, so for me, it's very raw, it's very honest, and it's very true." True Romance was received well by music critics, earning a 76/100 on Metacritic, which assigns a rating out of 100 to reviews from mainstream critics, indicating "generally favorable reviews".

31. Charli XCX began work on her second album in mid-2013. Later that year she released the single "SuperLove", which became her first solo chart entry on the UK Singles Chart, at number 62.

32. In early 2014, she was featured on Australian rapper Iggy Azalea's single "Fancy"; the track topped the US Billboard Hot 100, becoming both artists' first number-one single on the chart.

33. Charli XCX expanded her portfolio of songwriting for other artists, with credits on Azalea's 2014 single "Beg for It", Ryn Weaver's debut single "OctaHate", and material for acts including Sky Ferreira, Neon Jungle, Rihanna, and Gwen Stefani.

34. In mid-2014, Charli XCX contributed the song "Boom Clap" to the soundtrack of the film The Fault in Our Stars. "Boom Clap" peaked at number eight on the Billboard Hot 100 and at number six in the UK, and was certified platinum in Australia.

35. Charli XCX opened for Katy Perry on the European leg of her Prismatic World Tour in early 2015, headlined her own UK tour, and featured alongside R&B artist Tinashe on rapper Ty Dolla Sign's single "Drop That Kitty".

36. In July and August 2015, Charli XCX co-headlined a US tour with Jack Antonoff.

37. In a July 2015 interview with British fashion magazine i-D, Charli XCX said that she was working on her third album and described it as "the most pop thing, and the most electronic thing" she had done. British producer SOPHIE has been confirmed to be involved in the album's production.

39. Charli XCX describes her music as Experimental pop due to constant changes in her music and exploring diverse genres such as synthpop, gothic pop, electronic pop, alternative pop, indietronica, in her later material Sucker, she went for a pop punk sound and early records were described as a blend of dark wave and witch house.

41. She has named "Siouxsie Sioux as her hero".

43. The Hives, Weezer, Ramones and 1960s yé-yé music all influenced her third album.

44. She has said that "the best artists are the ones who constantly change-Madonna, [David] Bowie" Her "dream collaboration would be with someone like Björk, Kate Bush, or even Dionne Warwick".

47. She considers herself a feminist, and wrote her song "Body of My Own" as a "feminist statement."

48. XCX also directed a documentary about gender equality, titled The F Word And Me, which premiered on BBC 3.