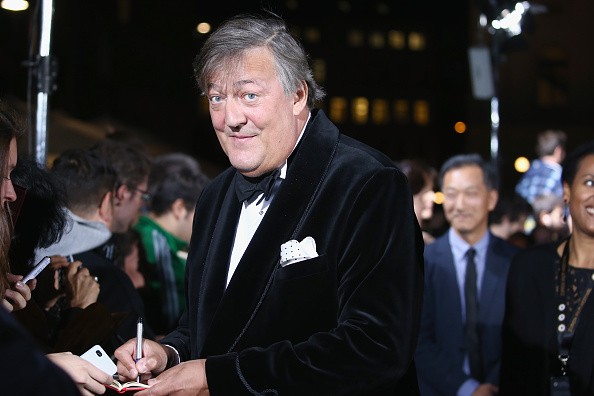 2. He is an English comedian, actor, writer, presenter and activist.

3. He had a troubled childhood and dolescence during which he was expelled from two schools and spent three months in prison for credit card fraud.

4. After his troubled childhood and dolescence, Fry secured a place at Queens' College, Cambridge, where he studied English literature.

5. While at university, he became involved with the Cambridge Footlights, where he met his long-time collaborator Hugh Laurie. As half of the comic double act Fry and Laurie, he co-wrote and co-starred in A Bit of Fry & Laurie and also took the role of Jeeves (with Laurie playing Wooster) in Jeeves and Wooster.

6. Fry's acting roles include a Golden Globe Award-nominated lead performance in the film Wilde, Melchett in the BBC television series Blackadder, the title character in the television series Kingdom, a recurring guest role as Dr Gordon Wyatt on the crime series Bones, and as Gordon Deitrich in the dystopian thriller V for Vendetta.

7. He has also written and presented several documentary series, including the Emmy Award-winning Stephen Fry: The Secret Life of the Manic Depressive, which saw him explore his bipolar disorder, and the travel series Stephen Fry in America.

8. He is also the long-time host of the BBC television quiz show QI.

9. Besides working in television, Fry has contributed columns and articles for newspapers and magazines.

10. He has written four novels and three volumes of autobiography, Moab Is My Washpot, The Fry Chronicles and More Fool Me.

11. He also appears frequently on BBC Radio 4, starring in the comedy series Absolute Power, being a frequent guest on panel games such as Just a Minute, and acting as chairman for I'm Sorry I Haven't a Clue, where he was one of a trio of hosts who succeeded the late Humphrey Lyttelton.

12. Fry is also known for his voice-overs, reading all seven of the Harry Potter novels for the UK audiobook recordings, narrating the LittleBigPlanet and Birds of Steel series of video games, as well as an animated series of explanations of the laws of cricket, and a series of animations about Humanism for the British Humanist Association.

14. He is the son of Marianne Eve Fry and Alan John Fry, a British physicist and inventor.

15. Fry's mother is Jewish, but he was not raised in a religious family.

16. His maternal grandparents, Martin and Rosa Neumann, were Hungarian Jews, who emigrated from Šurany (now Slovakia) to Britain in 1927.

18. His paternal grandmother had roots in Kent and Cheshire.

19. Fry grew up in the village of Booton near Reepham, Norfolk, having moved from Chesham, Buckinghamshire, at an early age.

20. He has an elder brother, Roger, and a younger sister, Joanna.

21. Fry briefly attended Cawston Primary School in Cawston, Norfolk, before going on to Stouts Hill Preparatory School in Uley, Gloucestershire, at the age of seven, and then to Uppingham School, Rutland, where he joined Fircroft house, and was described as a "near-asthmatic genius".

22. He was expelled from Uppingham when he was 15 and subsequently from the Paston School.

23. While Fry was in Pucklechurch, his mother had cut out the crossword from every copy of The Times since he had been away, something which Fry said was "a wonderful act of kindness". Fry later stated that these crosswords were the only thing that got him through the ordeal.

24. Fry also met his future comedy collaborator Hugh Laurie at Cambridge and starred alongside him in the Footlights Club.

25. Fry's career in television began with the 1982 broadcasting of The Cellar Tapes, the 1981 Cambridge Footlights Revue which was written by Fry, Hugh Laurie, Emma Thompson and Tony Slattery. The revue caught the attention of Granada Television, who, keen to replicate the success of the BBC's Not the Nine O'Clock News, hired Fry, Laurie and Thompson to star alongside Ben Elton in There's Nothing to Worry About!.

26. Between 1990 and 1993, Fry starred as Jeeves (alongside Hugh Laurie's Bertie Wooster) in Jeeves and Wooster, 23 hour-long adaptations of P. G. Wodehouse's novels and short stories.

27. Towards the end of 2003, Fry starred alongside John Bird in the television adaptation of Absolute Power, previously a radio series on BBC Radio 4.

28. In January 2016 it was announced that Fry would be appearing as the character "Cuddly Dick" in Series 3 of the Sky One family comedy Yonderland.

29. Fry has appeared in a number of BBC adaptations of plays and books, including a 1992 adaptation of the Simon Gray play The Common Pursuit (he had previously appeared in the West End stage production); a 1998 Malcolm Bradbury adaptation of the Mark Tavener novel In the Red, taking the part of the Controller of BBC Radio 2; and in 2000 in the role of Professor Bellgrove in the BBC serial Gormenghast, which was adapted from the first two novels of Mervyn Peake's Gormenghast series.

31. He appeared in the genealogy series Who Do You Think You Are?, tracing his maternal family tree to investigate his Jewish ancestry.

34. Having made his film début in the 1985 film The Good Father, Fry had a brief appearance in A Fish Called Wanda, and then appeared as the eponymous Peter in Kenneth Branagh's Peter's Friends in 1992.

35. In 2003, Fry made his directorial début with Bright Young Things, adapted by him from Evelyn Waugh's Vile Bodies.

37. Later in 2001, he wrote the English libretto and dialogue for Kenneth Branagh's film adaptation of The Magic Flute.

38. Fry continues to make regular film appearances, notably in treatments of literary cult classics. He portrayed Maurice Woodruff in The Life and Death of Peter Sellers, served as narrator in the 2005 film version of The Hitchhiker's Guide to the Galaxy, and in 2005 appeared in both A Cock and Bull Story, based on Tristram Shandy, and V for Vendetta, as a non-conforming TV presenter who challenges the fascist state.

39. Fry starred in the Tim Burton version of Alice in Wonderland, as the voice of the Cheshire Cat.

40. Fry's distinctive voice has been featured in a number of video games, including an appearance as Reaver, an amoral supporting character in Lionhead Studios games Fable II and Fable III, and as the narrator of Sackboy's story in the crossover fighting game PlayStation All-Stars Battle Royale.

42. Since the publication of his first novel, The Liar (1991), Fry has written three further novels, several non-fiction works and three volumes of autobiography. Making History (1997) is partly set in an alternative universe in which Adolf Hitler's father is made infertile and his replacement proves a rather more effective Führer. The book won the Sidewise Award for Alternate History.

43. In May 2009, Fry unveiled The Dongle of Donald Trefusis, an audiobook series following Donald Trefusis (a fictional character from Fry's novel The Liar and from the BBC Radio 4 series Loose Ends), set over 12 episodes. After its release, it reached No. 1 on the UK Album Chart list.

44. Fry's use of the word "luvvie" (spelled "lovie" by Fry) in The Guardian on 2 April 1988 is given by the Oxford English Dictionary as the earliest recorded use of the word as a humorous synonym for "actor".

45. He is on cordial terms with Prince Charles, through his work with the Prince's Trust. He attended the Prince's wedding to Camilla Parker Bowles in 2005.

46. Fry is a friend of comedian and actor (and Blackadder co-star) Rowan Atkinson and was best man at Atkinson's wedding to Sunetra Sastry at the Russian Tea Room in New York City.

47. Fry was a friend of British actor John Mills.

48. His best friend is Hugh Laurie, whom he met while both were at Cambridge and with whom he has collaborated many times over the years. He was best man at Laurie's wedding and is godfather to all three of his children.

50. Regarding football, he is a supporter of Norwich City, and is a regular visitor to Carrow Road.