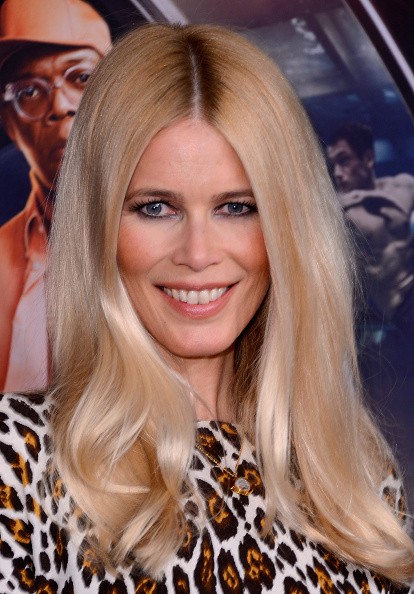 When talking about the model profession at present, she said: "Supermodels, like we once were, don't exist any more." Here are 50 facts about Claudia Schiffer.

1. Claudia Schiffer is a German model and creative director of her own clothing label.

2. Schiffer rose to popularity and became a household name during the early 1990s as one of the world's most successful models.

3. In her early career, she was said to resemble Brigitte Bardot.

4. She appeared on more than 1000 magazine covers and continues to front global campaigns for luxury fashion and fragrance houses.

6. She is the daughter of Gudrun and Heinz Schiffer, a lawyer.

7. She has two brothers, Stefan and Andreas, and one sister, Ann Carolin.

8. Schiffer said she was popular in high school, but she has revealed that, because she was so tall, she became very shy and did not want to be noticed.

9. She was also subjected to jealousy by others as she came from a wealthy family that was well-known locally.

10. Schiffer is fluent in three languages, German, English and French.

11. She originally wanted to become a lawyer and used to work in her father's law firm.

12. She later dropped her law aspirations when she began her modeling career.

13. She was discovered in October 1987 at 17, when she was spotted in a nightclub in Düsseldorf by Michel Levaton, the boss of Metropolitan Model Agency who signed her up to become a model.

14. Schiffer completed her high school education and then began to work as a model.

15. She flew out to Paris for a trial photo shoot and soon after she appeared on the cover of French Elle after being well received in Paris.

16. In the early 1990s, she starred in the highly publicised Guess? Jeans campaigns.

17. After several other magazine appearances including the cover of British Vogue shot by Herb Ritts, Schiffer quickly achieved supermodel status.

18. Was selected by Karl Lagerfeld to become the new face of Chanel.

19. She went on to become world famous, instantly recognisable with her blue eyes, blonde hair and tall figure, standing at 1.81 m (approx. 5 ft 11 in.).

20. Schiffer appeared on the November 1999 millennium cover of Vogue as one of the "Modern Muses".

21. Named as one of the most beautiful women in the world, her ability to appeal to a global audience has assured an internationally successful career spanning more than 25 years.

22. Schiffer was the first model to make the covers of Vanity Fair, Rolling Stone, The New York Times and People and has appeared numerous times on covers of Vogue, Harper's Bazaar, Elle, Cosmopolitan and Time.

24. Endorsing luxury brands, Schiffer has appeared as the face of high street retailers including Mango and Accessorize, and had her ears pierced for the first time specially for the 2006 Autumn/Winter Accessorize campaign.

25. Schiffer still holds a contract with L'Oréal and is one of their longest standing ambassadors.

26. Karl Lagerfeld photographed Schiffer for a Dom Pérignon campaign, around 17 years after her first appearance for Chanel.

28. Her mother agency is Model Management in Hamburg.

30. In 2012, she posed again for Guess black and white ads marking the brand's 30th anniversary.

31. Schiffer launched her eponymous cashmere collection during Paris Fashion Week in March 2011. The Autumn-Winter 2011 season saw her fashion design debut and has been followed by a Spring-Summer 2012 collection. The collection is sold globally in department stores and high-end boutiques. Schiffer is the creative director of the brand.

32. Schiffer has appeared in a number of films and music videos. Her first appearance in film was in the children's movie Richie Rich in 1994 and then starred opposite Dennis Hopper and Matthew Modine in The Blackout.

33. She then went on to appear in Friends & Lovers, Black and White in 1999, In Pursuit and Life Without Dick in 2001, and then Love Actually in a semi-cameo role. Schiffer has made other cameo appearances in films including Ben Stiller's Zoolander.

35. She also appeared for Comic Relief in boyband Westlife's music video for Uptown Girl and in 2000, she made a cameo appearance in Bon Jovi's video for "Say It Isn't So".

37. Schiffer has hosted the French Fashion Awards and the World Music Awards in Monaco.

38. With fellow models Christy Turlington, Naomi Campbell, and Elle Macpherson, Schiffer was joint owner of a chain of restaurants called the Fashion Café in 1995.

39. Schiffer remains a prominent figure in German society and helped present and carry the trophy with Pelé during the opening ceremonies at the 2006 World Cup.

40. She also presented Prince William with a polo trophy in 2002.

41. When talking about the model profession at present, she said: "Supermodels, like we once were, don't exist any more."

42. Claudia began her involvement with UNICEF by becoming a member of the Arts & Entertainment Support Committee and is currently a UK Goodwill Ambassador for the organization.

43. Claudia was also a spokesman for Make Poverty History where she appeared in the powerful Click advertisement. In July 2005, she appeared as a presenter at both the Berlin and Edinburgh Live 8 concerts.

44. In 1993 at a Berlin celebrity gala Schiffer met magician David Copperfield when he brought her on stage to participate in a mind reading act and in his flying illusion.

46. During this engagement, Schiffer sometimes appeared on stage with Copperfield to act as his special guest assistant in illusions including being levitated, guillotined and sawn in half.

47. She also appeared alongside Copperfield in David Copperfield: 15 Years of Magic, a documentary in which she played the role of a reporter interviewing him, and at the end of which they reprised their performance of the "Flying" illusion.

48. After a nearly six-year engagement, in September 1999 they announced their separation citing work schedules.