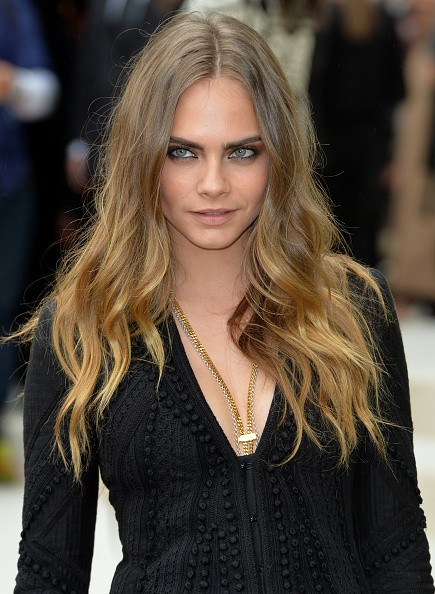 Delevingne sings and plays the drums and the guitar. Learn 50 facts about model and actress Cara Delevingne.

1. Delevingne was born in Hammersmith, London.

2. Her father is a property developer Charles Hamar Delevingne.

3. She grew up in Belgravia, London, one of the wealthiest districts in the world.

6. Her godfather is Condé Nast executive Nicholas Coleridge and her godmother is actress Joan Collins.

8. Her maternal grandmother Janie Sheffield was lady-in-waiting to Princess Margaret.

10. She has dyspraxia and consequently found school challenging.

11. In June 2015, Delevingne opened up in regards to the peak of her battle, at 15 years old, with depression in an interview with Vogue. She said, "I was hit with a massive wave of depression and anxiety and self-hatred, where the feelings were so painful that I would slam my head against a tree to try to knock myself out."

12. At age 16, after completing her GCSE examinations she moved to Bedales School in Hampshire, to focus on drama and music.

13. After one year t Bedales School in Hampshire, she dropped out and followed the career path of her sister, Poppy, into modelling.

15. She is an English fashion model and actress.

16. Signed with Storm Model Management after leaving school in 2009.

18. Has appeared in shows for houses including Burberry, Mulberry, Dolce & Gabbana, and Jason Wu.

19. She started her acting career with a minor role in the 2012 film adaptation of Anna Karenina.

21. Will co-star as Enchantress in the superhero film Suicide Squad.

23. She signed with Storm Model Management in 2009 after being spotted by Sarah Doukas, the founder of Storm, who had previously discovered Kate Moss.

24. She worked in the industry for a year before booking a paying job and went through two seasons of castings before landing her first runway show.

25. Delevingne was presented with her first opportunity at paid modelling when she was spotted by Burberry's Christopher Bailey while working part-time in the office of fashion website ASOS. Bailey cast her in the company's spring/summer 2011 campaign.

29. She is also the face of Chanel's Resort 2013 campaign along with Dutch model Saskia de Brauw.

30. was that the stress had, at least to some degree, contributed to her developing the skin condition psoriasis.

31. In August 2013, Delevingne announced she would be voicing the DJ of the Non-Stop-Pop FM radio station in the video game Grand Theft Auto V, which once released became the fastest-selling entertainment product in history.

32. In June 2014, Delevingne made her TV debut in the final episode of the third and final series of Playhouse Presents. This was a series of self-contained TV plays, made by British broadcaster Sky Arts. Delevingne featured as Chloe, opposite veteran British actress Sylvia Syms.

33. Delevingne sings and plays the drums and the guitar.

34. Over 2011 and 2012, Delevingne wrote and recorded two albums of music under artist manager Simon Fuller and was subsequently offered a record deal. However, she turned the deal down due to the fact that her name would be changed.

35. In 2013, she recorded an acoustic duet cover version of Sonnentanz with British soul and jazz singer/songwriter Will Heard.

36. She also covered the song 'I Want Candy' in the mini film called 'Gang', which was the title of the 2013 A/W Katie Grand Loves Hogan collection and the name of the large-format magazine created to celebrate the collaboration.

37. Delevingne also teamed up with Pharrell Williams to make the song CC the World which was used for the short Chanel film Reincarnation in which both Pharrell and Delevingne star. This was released to the public on 1 December 2014.

39. Delevingne has also designed four collections for Mulberry featuring rucksacks and handbags with many embossed with a 'Made in England' stamp underneath the base, alluding to a tattoo that Cara has under her left foot.

40. Delevingne is a self-described animal lover.

41. Following the high-profile killing of Cecil the Lion in 2015, the actress auctioned her personal TAG Heuer watch, raising £18,600 for WildCRU.

42. At the Women in the World summit in October 2015, Delevingne spoke about her battle with depression which started when she was 15 years old.

45. On 23 January 2015, Delevingne, was named as the new brand ambassador of Swiss watch brand TAG Heuer.

47. Later in May 2015, she was also in Taylor Swift's star studded Bad Blood music video which went onto break Vevo's 24-hour viewing record, with 20.1 million views in its day of release.

48. On 24 October 2014, she starred in a sketch for an annual 90-minute comedy TV event called The Feeling Nuts Comedy Night, which aired on Channel 4 and was designed to raise awareness of testicular cancer.

50. Then in December 2014, Cara starred in Reincarnation, a short film by Karl Lagerfeld for Chanel alongside Pharrell Williams and Geraldine Chaplin.