50 facts about Indian actress Kajol
Share Tweet Email 0 Comments
NEXT> 50 facts about John Malkovich: known for his wish to maintain a private life
Tuesday, April 07, 2020
STAY CONNECTED WITH US 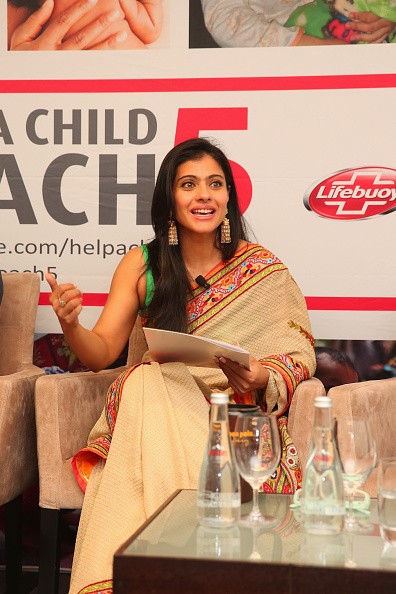 Kajol established herself as one of India's most successful actress. Learn 50 interesting facts about Kajol.

2. She is an Indian film actress.

3. Predominantly she works in Hindi cinema.

4. She has received six Filmfare Awards, among eleven nominations.

5. Along with her late aunt Nutan, holds the record for most Best Actress wins at Filmfare, with five.

6. In 2011, the Government of India awarded her with the Padma Shri.

7. She was born to actress Tanuja and film director Shomu Mukherjee.

8. Kajol made her acting debut with Bekhudi, while still in school.

9. She subsequently quit her studies to pursue acting.

10. Had her first commercial success with Baazigar.

12. Her performances in films earned her four Filmfare Awards in the Best Actress category.

13. She earned critical appreciation for playing against type in the 1997 mystery film Gupt and the 1998 psychological thriller Dushman.

14. Following a sabbatical from full-time acting in 2001, Kajol returned to films with the 2006 romantic thriller, Fanaa and continued working infrequently through the rest of the decade.

15. Established herself as one of India's most successful actress.

16. In addition to acting in films, Kajol is a social activist and is noted for her work with widows and children.

17. For her activist work she received the Karmaveer Puraskaar in 2008.

18. She has featured as a talent judge for Zee TV's reality show, Rock-N-Roll Family.

19. Holds a managerial position at Devgn Entertainment and Software Ltd.

20. She is known in the Indian media for not subscribing to stereotypes of a Bollywood heroine and has hence been labelled as "unconventional".

21. Kajol was in a relationship with actor Ajay Devgan since 1995.

24. Kajol was born in Mumbai to the Mukherjee-Samarth film family of Bengali-Marathi descent.

25. Her mother, Tanuja, is an actress, while her father Shomu Mukherjee was a film director and producer.

28. Her paternal uncles, Joy Mukherjee and Deb Mukherjee, are film producers, while her paternal grandfather, Sashadhar Mukherjee, was a filmmaker.

29. Kajol's cousins Rani Mukerji, Sharbani Mukherjee and Mohnish Behl are also Bollywood actors; whereas another cousin of hers, Ayan Mukerji is a director.

30. Kajol describes herself as being "extremely mischievous" as a child.

31. She was very stubborn and impulsive from a very young age.

32. Her parents separated when she was young; but according to Tanuja, Kajol was not affected by the split as "we never argued in front of [her]".

33. In the absence of her mother, Kajol was looked after by her maternal grandmother, who "never let me feel that my mother was away and working".

34. According to Kajol, her mother inculcated a sense of independence in her at a very young age. Growing up between two separate cultures, she inherited her "Maharashtrian pragmatism" from her mother and her "Bengali temperament" from her father.

35. Kajol studied at the St Joseph Convent boarding school in Panchgani. Apart from her studies, she participated in extra-curricular activities, such as dancing.

36. It was in school that she began to form an active interest in reading fiction, as it helped her "through the bad moments" in her life.

37. At the age of sixteen, she began work on Rahul Rawail's film Bekhudi, which according to her was a "big dose of luck".

38. On not completing her education, she quoted, "I don't think I am any less well-rounded because I didn't complete school".

39. In 1994, Kajol featured in the melodrama Udhaar Ki Zindagi, as the granddaughter of the characters played by Jeetendra and Moushumi Chatterjee. The film, which was a remake of the hit Telugu film, Seetharamaiah Gari Manavaralu, failed to do well at the box-office.

40. The success of Yeh Dillagi proved to be a major breakthrough for Kajol and her performance in the film fetched her a first Best Actress nomination at the annual Filmfare Awards.

41. In 1995, Kajol starred in two major commercial successes - Rakesh Roshan's Karan Arjun and Aditya Chopra's Dilwale Dulhania Le Jayenge - both opposite Shah Rukh Khan. The former was a melodramatic thriller, based on the concept of reincarnation, in which she played Sonia Saxena, a supporting character who forms the love interest of Khan. The film eventually emerged as the second-highest grossing film of the year in India.

42. In 2000, she launched an online portal, Cineexplore. She explained, "The portal takes into account every aspect of film-making. My role is that of a supervisor. I just have to overlook the proceedings. We have our hands in everything. We are making software for TV and music videos."

44. After travelling across United Kingdom, Canada and the United States of America, Kajol refused to participate in any more world tours, as she couldn't handle "the stress".

45. In 2008, Kajol featured as a talent judge, alongside her husband, Ajay Devgn and mother, Tanuja, in Zee TV's family reality show, Rock-N-Roll Family.

46. She described her experience of working in television by saying, "Working on television is much, much tougher than films. But television has a great connect with a live audience which is a refreshing change for us actors."

47. Kajol has been actively involved in several philanthropic endeavours related to women and children. According to her, "every child deserves education", as "education is the basis of society".

48. In 2008, she was awarded with the Karmaveer Puraskaar, for her contribution in the field of social service.

49. Kajol is involved with Shiksha, an NGO that works in the field of children's education. In 2009, she launched the Shiksha 2009 campaign, to support the cause.

50. Kajol is the international goodwill ambassador and patron of The Loomba Trust - a charity organisation devoted to supporting widows and their children around the world, particularly in India. Speaking about the issue, she said: "It's sad to know that widows are still considered a blight in our society. There are widows who are still not marriageable. I strongly feel for them and take it as a social responsibility to eradicate the issue."