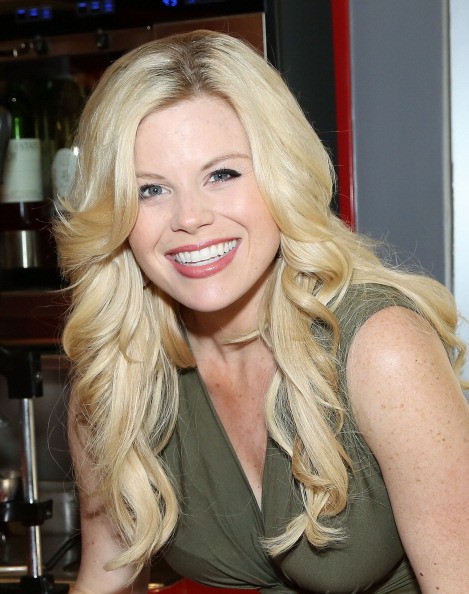 Hilty began taking vocal lessons at the age of 12, and was interested in performing opera. Learn 43 facts about Megan Hilty.

2. She moved to New York City after graduating and in August 2004, she made her Broadway debut in the show as the standby for Glinda, before taking over the role from Jennifer Laura Thompson on May 31, 2005.

3. Hilty was born in Bellevue, Washington.

4. She is the daughter of Jack and Donna Hilty.

5. She began taking vocal lessons at the age of 12, and was interested in performing opera.

6. Attended Sammamish High School in Bellevue, and then transferred to the Washington Academy of Performing Arts Conservatory High School in Redmond, and later the Chrysalis School, Woodinville.

7. Graduated from the Carnegie Mellon School of Drama in 2004, and is a member of Actors' Equity.

8. Is a recipient of the National Society of Arts and Letters Award for Excellence in Musical Theater.

10. She is a musical theatre and television actress, and singer.

11. Rose to prominence for her roles in several Broadway musicals including her performance as Glinda in Wicked and her portrayal of Doralee Rhodes in 9 to 5: The Musical.

12. Her best known role was as Ivy Lynn on the musical-drama TV series Smash, on which she sang many original songs, including the Grammy Award-nominated "Let Me Be Your Star".

14. Hilty starred in a musical called Vanities during its premiere engagement at the Mountain View Center for the Performing Arts in Mountain View, California.

15. In addition to her stage work, Hilty has made guest appearances on various television shows including The Closer, The Suite Life of Zack & Cody, Ugly Betty, CSI: Crime Scene Investigation, Desperate Housewives, and Shark.

16. She was the singing voice of Snow White in the animated feature film Shrek the Third.

18. Hilty had participated in workshops and readings developing and originating the character of Doralee for the musical.

20. In 2009, Hilty appeared in an episode of CSI: Crime Scene Investigation entitled "Deep Fried and Minty Fresh", where she played a fast food manager helping out with a murder at Choozy's Chicken.

21. She also appeared in two episodes of Desperate Housewives where she played the other woman to Carlos' boss.

22. Hilty also lent her talents in Rated RSO: The Music and Lyrics of Ryan Scott Oliver at The Boston Court Performing Arts Center in December 2009, alongside Lesli Margherita, Steve Kazee, Morgan Karr, Natalie Weiss, among others.

23. Hilty also branched off into a coffee and tea product line.

24. Hilty began performing a variety show with her former Wicked co-star Shoshana Bean, called The Meg an' Sho Show. They often perform a "Wicked swap", in which Bean sings a medley of Glinda's songs and Hilty sings Elphaba's.

25. She also continued her television work with appearances in the hit Disney Channel shows The Suite Life of Zack & Cody and Phineas and Ferb.

26. In 2010, Hilty confirmed that she will be voicing the character of the China Princess in the upcoming animated feature Dorothy of Oz, and she appeared as the "Heckler" in an episode of Louis CK's comedy, Louie on FX.

27. In May 2012, Hilty appeared in Gentlemen Prefer Blondes, as a part of the Encores! program. She appeared as Lorelei Lee alongside such performers as Brennan Brown, Simon Jones and Rachel York. Hilty received rave reviews for her performance, with the New York Times rating her performance on par with those of Carol Channing and Marilyn Monroe.

28. In November 2012, it was announced that Hilty will be appearing on the upcoming album release I'm Ready: The Songs of Rob Rokicki and will be performing at the album release concert on November 19, 2012.

29. Hilty released her debut solo album, It Happens All the Time, on March 12, 2013. The singer described the album as "a breakup album".

30. On June 13, 2013, it was announced that Hilty would be starring alongside Sean Hayes as Liz on the upcoming NBC sitcom Sean Saves the World. The series has since been cancelled by NBC.

31. In 2014, Hilty was featured on the Wesley Taylor web series It Could Be Worse.

32. In August 2014, she appeared in a segment on the first episode of the rebooted Candid Camera show airing on TV Land.

33. On June 8, 2015, Hilty and several other cast members of Smash took part in a concert presentation of Bombshell, the fictional musical from the TV series Smash.

34. In July 2015, it was confirmed that Hilty would be returning to Broadway in the Roundabout Theatre Company's revival of Noises Off, in which she will portray Brooke Ashton.

36. On November 2, 2013, Hilty revealed she married Brian Gallagher at a chapel in Las Vegas, Nevada.

37. On March 29, 2014, she and her husband announced that they were expecting their first child.

40. Many times she plays usual blonde roles. This is however what she has to say about the blond roles, "I've got a lot more to me than people think."

41. Regarding her career she says it was like a snowball effect, "Hopefully I'll get to do opera at some point in my life. It was kind of a snowball effect. I did all kinds of youth theatre and community theatre and performing arts high school: One thing led to another, and here I am."

42. She admires Dolly Parton, the writer of the musical 9 to 5. "She's a living legend and an icon. When I first got the job I was so excited, and then I kind of had a panic attack because I knew Dolly would be in the room."

43. Her fans use to give her homemad gifts. "I have gotten loads of nice gifts, a lot of them homemade. People have given me Glinda bears, homemade wands... I never would have thought to do that stuff myself, but, it's great. It's overwhelming but so amazing."