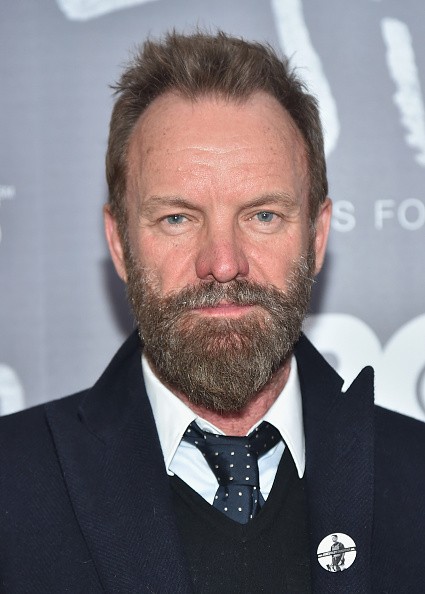 Sting was the principal songwriter, lead singer, and bassist for the new wave rock band The Police. Learn 50 facts about Sting.

3. He was the principal songwriter, lead singer, and bassist for the new wave rock band The Police from 1977 to 1984, before launching a solo career.

4. He has included elements of rock, jazz, reggae, classical, new-age and worldbeat in his music.

5. As a solo musician and a member of The Police, he has received 16 Grammy Awards (his first in the category of best rock instrumental in 1980, for "Reggatta de Blanc"), three Brit Awards, including Best British Male in 1994 and Outstanding Contribution in 2002, a Golden Globe, an Emmy, and three Academy Award nominations for Best Original Song.

6. He was inducted into the Songwriters Hall of Fame in 2002 and the Rock and Roll Hall of Fame as a member of The Police in 2003.

7. In 2000, he received a star on the Hollywood Walk of Fame for recording.

8. In 2003, Sting received a CBE from Elizabeth II at Buckingham Palace for services to music, and was made a Kennedy Center Honoree at the White House in 2014.

9. With The Police, Sting became one of the world's best-selling music artists.

10. Solo and with The Police combined, he has sold over 100 million records.

13. He has collaborated with other musicians, including "Rise & Fall" with Craig David, "All for Love", with Bryan Adams and Rod Stewart, "You Will Be My Ain True Love" with Alison Krauss, and introduced the North African music genre raï to Western audiences by his international hit "Desert Rose" with Cheb Mami.

15. He is the eldest of four children born to Audrey, a hairdresser, and Ernest Matthew Sumner, a milkman and engineer.

16. He grew up near Wallsend's shipyards, which made an impression on him.

17. He helped his father deliver milk and by ten was "obsessed" with an old Spanish guitar left by an emigrating friend of his father.

18. He visited nightclubs such as Club A'Gogo to see Cream and Manfred Mann, who influenced his music.

19. After being a bus conductor, building labourer and tax officer, he attended Northern Counties College of Education from 1971 to 1974 and qualified as a teacher.

20. He taught at St Paul's First School in Cramlington for two years. Sting performed jazz in the evening, weekends and during breaks from college and teaching.

21. He gained his nickname after his habit of wearing a black and yellow sweater with hooped stripes with the Phoenix Jazzmen.

22. In the 1985 documentary Bring on the Night a journalist called him Gordon, to which he replied, "My children call me Sting, my mother calls me Sting, who is this Gordon character?" In Time in 2011 he said: "I was never called Gordon. You could shout 'Gordon' in the street and I would just move out of your way."

23. In January 1977, Sting moved from Newcastle to London and joined Stewart Copeland and Henry Padovani (soon replaced by Andy Summers) to form The Police. From 1978 to 1983 they had five UK chart-topping albums, won six Grammy Awards, and two Brit Awards; for Best British Group, and for Outstanding Contribution to Music.

24. According to Sting, who appeared in the documentary Last Play at Shea, he decided to leave The Police while onstage during a concert of 18 August 1983 at Shea Stadium because he felt that playing that venue was "[Mount] Everest". While never formally breaking up, after Synchronicity the group agreed to concentrate on solo projects.

25. As the years went by, the band members, particularly Sting, dismissed the possibility of reforming. In 2007, however, the band reformed and undertook a world tour.

26. In September 1981, Sting made his first live solo appearance, on all four nights of the fourth Amnesty International benefit The Secret Policeman's Other Ball in London's Drury Lane theatre at the invitation of producer Martin Lewis. He performed solo versions of "Roxanne" and "Message in a Bottle".

27. In 1982 he made a solo single, "Spread a Little Happiness" from the film of the Dennis Potter television play Brimstone and Treacle. The song was a re-interpretation of the 1920s musical Mr. Cinders by Vivian Ellis, and a Top 20 hit in the UK.

29. In 1988 he joined musicians including Peter Gabriel and Bruce Springsteen for a six-week Human Rights Now! tour commemorating the 40th anniversary of the Universal Declaration of Human Rights.

30. Sting had shown his interest in social and political issues in his 1980 song "Driven to Tears," an indictment of apathy to world hunger.

31. He took part in Bob Geldof's "Feed The World" project in December 1984 and sang on "Do They Know It's Christmas?", which led to the Live Aid concert in July 1985 at Wembley Stadium, in which Sting performed with Phil Collins and Dire Straits.

32. In 1988, the single "They Dance Alone (Cueca Solo)" chronicled the plight of the mothers, wives and daughters of the "disappeared", political opponents killed by the Pinochet dictatorship in Chile.

33. With his wife Trudie Styler and Raoni Metuktire, a Kayapó Indian leader in Brazil, Sting founded the Rainforest Foundation Fund to help save the rainforests and protect indigenous peoples there.

35. Sting and Styler were awarded the Peace Abbey Courage of Conscience award in Sherborn, Massachusetts, on 30 June 2000.

36. In September 2001, Sting took part in America: A Tribute to Heroes singing "Fragile" to raise money for families of victims of the 9/11 attacks in the U.S.

39. In 2007, Sting joined Andy Summers and Stewart Copeland for the closing set at the Live Earth concert at Giants Stadium in East Rutherford, New Jersey. Joined by John Mayer and Kanye West, Sting and The Police ended the show singing "Message in a Bottle"

40. Sting is a patron of the Elton John AIDS Foundation.

41. In 2010 he became a Patron of the poverty alleviation and beekeeping charity Bees for Development.

42. In 2011, Sting joined more than 30 others in an open letter to British prime minister David Cameron for "immediate decriminalisation of drug possession" if a policy review showed it had failed. Sting was quoted: "Giving young people criminal records for minor drug possession serves little purpose - it is time to think of more imaginative ways of addressing drug use in our society."

43. On 2 November 2012, Sting appeared on Hurricane Sandy: Coming Together and sang a version of "Message in a Bottle" to raise funds for those affected by a storm on the east coast of the United States that week. The show reportedly raised $23 million.

44. Sting married actress Frances Tomelty from Northern Ireland, on 1 May 1976. Before they divorced in 1984, they had two children: Joseph and Fuchsia Katherine.

45. In 1982, after the birth of his second child, he separated from Tomelty and began living with actress and film producer Trudie Styler. The couple married on 22 August 1992 in an 11th-century chapel in Wiltshire, south-west England.

47. Giacomo Luke is the inspiration behind the name of Kentucky Derby-winning horse Giacomo.

48. Sting said his children will not inherit his £180m fortune, fearing his riches are "albatrosses round their necks", that "there won't be much money left because we are spending it."

50. He participated in running races at Parliament Hill and charity runs.