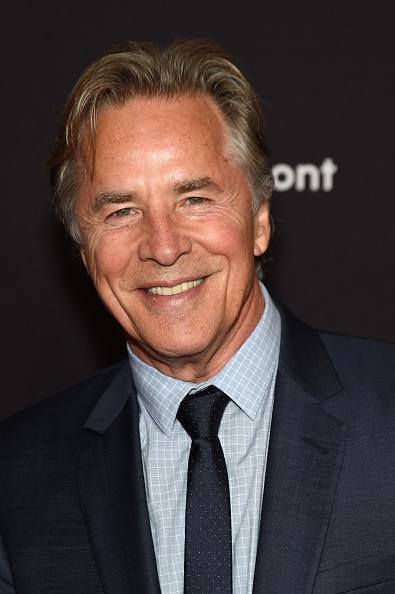 2. His mother, Nell, was a beautician.

3. His father, Wayne Fred Johnson, was a farmer.

5. At age six, he moved from Missouri to Wichita, Kansas.

6. A 1967 graduate of South High School, he was involved in the high school's theatre program. As a senior, he played the lead role of Tony in West Side Story.

7. He also attended the University of Kansas in Lawrence, Kansas.

8. Johnson has spoken about his draft-exempt status and his dislike for war.

10. He is an actor, producer, director, singer, and songwriter.

11. He is best known for his role as James "Sonny" Crockett in the 1980s television series Miami Vice, and as the lead role in the 1990s cop series Nash Bridges.

12. Johnson is a Golden Globe-winning actor for his role in Miami Vice.

13. He is a winner of the American Power Boat Association Offshore World Cup.

14. Has received a star on the Hollywood Walk of Fame.

16. His first major role was in the 1969 Los Angeles stage production of Fortune and Men's Eyes, in which he played Smitty, the lead role. This exposure led to the quickly forgotten film The Magic Garden of Stanley Sweetheart (1970, based on a novel by Robert Westbrook, son of columnist Sheilah Graham).

17. In 1976, Johnson was roommates with actor Sal Mineo when Mineo was murdered outside their West Hollywood, California apartment.

18. From 1984-1989-after years of struggling to establish himself as a TV actor, and a string of pilots, none of which became a TV series-Johnson landed a starring role as undercover police detective Sonny Crockett in the cop series, Miami Vice. Miami Vice was noted for its revolutionary use of music, cinematography, imagery, and its glitzy take on the police drama genre. In the show, his partner was Ricardo Tubbs, played by Philip Michael Thomas.

19. Between seasons of Miami Vice, Johnson gained further renown through several TV miniseries, such as the 1985 TV remake of The Long, Hot Summer.

21. In Nash Bridges Johnson was again paired with a flashy convertible car, this time a Curious Yellow 1971 Plymouth Barracuda.

22. In the fall of 2005, he briefly starred in The WB courtroom television drama show Just Legal as a jaded lawyer with a very young and idealistic protégé/partner (Jay Baruchel).

23. In January 2007, Johnson began a run in the West End of London production of Guys and Dolls as Nathan Detroit.

24. Johnson also has a role in the Norwegian comedy Lange Flate Ballær 2 ("Long Flat Balls II"), directed by Johnson's friend Harald Zwart. Johnson did the movie as a favour to Zwart. The movie was launched March 14, 2008 in Norway, with Johnson making an appearance at the premiere.

25. He next appeared in When in Rome with Danny DeVito, Anjelica Huston and Kristen Bell.

28. In October 2010, he began appearing on the HBO series Eastbound & Down, playing Kenny Powers' long-lost father, going by the alias "Eduardo Sanchez".

29. He also reprised his role as Sonny Crockett for a Nike commercial with LeBron James where the NBA player contemplates acting and appears alongside Johnson on Miami Vice.

34. His single, "Heartbeat", reached #5 on the Billboard Hot 100 singles chart. It was the title track from his first album, and was a collaboration with Robert Tepper.

35. Johnson is also a good friend of Willie Nelson and Robert Tepper.

36. Was briefly a part of the "Thailand Pack", alongside Tommy Morrison, and British TV funny man Les Dennis.

37. Previously, Johnson worked with Gregg Allman and Dickey Betts of the Allman Brothers, co-writing the songs "Blind Love" and "Can't Take It with You" with Dickie Betts, which appeared on their 1979 album, Enlightened Rogues. B.B. King and Jules Taub co-wrote the song "Blind Love", the Allman's covered it.

38. "Till I Loved You" was the title track (a Top 40 hit in the Billboard Hot 100) of a studio album released on October 25, 1988 on Columbia Records. The song was a duet with then girl-friend, Barbra Streisand. The song was re-released on the Streisand album "Duets" in 2002.

39. Johnson has had four wives in five marriages, three of which were brief.

41. The names of Johnson's first two wives have not been made public knowledge.

43. At 22, he met Melanie Griffith, the 14-year-old daughter of his The Harrad Experiment co-star Tippi Hedren. When Griffith was 15, she and Johnson began living together in a rented house in Laurel Canyon.

44. On her 18th birthday they became engaged, and were married in January 1976; they filed for divorce that July.

45. In early 1989, Johnson and Griffith reunited and had a daughter, Dakota Johnson, and were married again from that year until 1996.

46. Johnson lived with actress Patti D'Arbanville from 1981 to 1988. The couple has a son, Jesse Wayne Johnson.

47. In 1995-1996 Johnson was briefly engaged to Jodi Lyn O'Keefe who played his daughter on Nash Bridges.

48. On April 29, 1999, he married San Francisco socialite and Montessori nursery school teacher Kelley Phleger, then 30, at the Pacific Heights mansion of Ann and Gordon Getty.

49. Actor Robert Wagner served as best man, and Mayor Willie Brown presided over the civil ceremony of Johnson and Phleger.