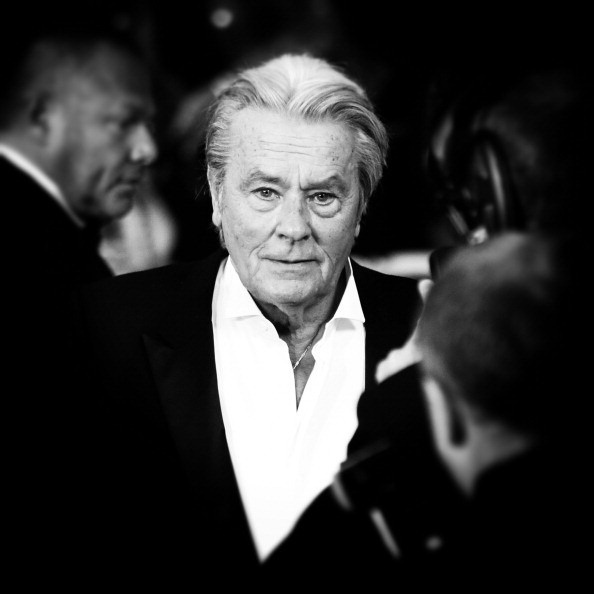 He enlisted in the French Navy and in 1953-54 he served as a fusilier marine in the First Indochina War. Learn 45 facts about Alain Delon.

2. He is a French actor and businessman.

3. Has French-Swiss dual citizenship since 1999.

4. Delon became one of Europe's most prominent actors and screen "heart throbs" in the 1960s.

5. He achieved critical acclaim for roles in films such as Rocco and His Brothers, Purple Noon, L'Eclisse, The Leopard, Lost Command and Le Samouraï.

6. Over the course of his career Delon worked with many well-known directors, including Luchino Visconti, Jean-Luc Godard, Jean-Pierre Melville, Michelangelo Antonioni and Louis Malle.

7. Delon acquired Swiss citizenship on 23 September 1999, and the company managing products sold under his name is based in Geneva. He is a citizen of the community of Chêne-Bougeries in the canton of Geneva.

8. Delon was born in Sceaux, Seine (now Hauts-de-Seine), Île-de-France, a suburb of Paris.

9. His parents, édith and Fabien Delon, divorced when Delon was four.

10. Both of his parents remarried, and Delon has a half-sister and two half-brothers.

11. His paternal grandmother was Corsican, from Prunelli-di-Fiumorbo.

12. He attended a Roman Catholic boarding school, the first of several schools from which he was expelled because of unruly behavior.

13. At 14, Delon left school, and worked for a brief time at his stepfather's butcher shop.

14. He enlisted in the French Navy and in 1953-54 he served as a fusilier marine in the First Indochina War.

15. He spent time working as a waiter, a porter, a secretary and a sales assistant.

16. He became friends with the actress Brigitte Auber, and joined her on a trip to the Cannes Film Festival, where his film career would begin.

17. At Cannes, Delon was seen by a talent scout for David O. Selznick. After a screen test Selznick offered him a contract, provided he learn English.

18. Delon returned to Paris to study English but when he met French director Yves Allégret, he was convinced that he should stay in France to begin his career. Selznick allowed Delon to cancel his contract, and Allégret gave him his debut in the film Quand la femme s'en mêle (When the Woman Butts In).

19. Delon then appeared in the film Women are Weak, which was a big hit. This was also the very first of his films to be seen in America.

20. Delon then made two films which ensured his international reputation. In 1960, he appeared in René Clément's Purple Noon, which was based on the Patricia Highsmith novel The Talented Mr. Ripley. He played protagonist Tom Ripley to critical acclaim; Highsmith herself was also a fan of his portrayal.

21. Delon was mentioned as a possibility for the lead in Lawrence of Arabia. Peter O'Toole was cast instead.

22. Instead of a straight salary for Any Number Can Win, Delon accepted distribution rights for the film in various territories. This gave him a taste for producing, which he would develop later.

23. In 1964, the Cinémathèque Française held a showcase of Delon's films and Delon started a production company, Delbeau Production, with Georges Beaume.

24. Any Number Can Win had been distributed in the US by MGM, who signed Delon to a five picture contract. The first movie of this deal was Joy House, shot in France with Jane Fonda. He then followed it up with two more films for the studio: the all-star The Yellow Rolls Royce, in which Delon had a relatively small role, and Once a Thief, where he co-starred with Ann-Margret.

25. Along with Steve McQueen and Sean Connery he was one of the biggest stars in Japan.

26. After six Hollywood movies Delon returned to France to make The Last Adventure. He was meant to reteam with Visconti in The Stranger but did not end up playing it.

27. Delon started his own production company, Adel, and starred in the company's first film, Jeff. Delon followed the success of the film with Borsalino, which became one of France's highest grossing films of the time.

28. In the early 1970s Delon tried Hollywood again, appearing in Red Sun. The film was popular in France but not the US.

29. In 1973, he recorded "Paroles, paroles", a popular French-language version of the Italian song "Parole parole", with French pop singer Dalida.

30. He played the title character in the 1975 Italian-French film Zorro.

31. In 1976, Delon starred in Monsieur Klein, which won him the César awards (French equivalent of Oscars).

32. In 1979 he made another attempt at Hollywood stardom, signing with agent Sue Mengers and starring in The Concorde ... Airport '79.

33. He was awarded the Best Actor César Award for his role in Bertrand Blier's Notre histoire, and portrayed the aristocratic dandy Baron de Charlus in a film adaptation of Marcel Proust's novel Swann in Love in the same year.

34. Delon announced his decision to give up acting in 1997, although he still occasionally accepts roles.

35. In the 1970s Delon expanded his interests. He bought trotters and promoted fights.

36. Since the formation of a perfume label in his name, Delon has had a variety of products sold under his name including wristwatches, clothing, eyewear, stationery and cigarettes.

38. On 20 March 1959, Delon was engaged to actress Romy Schneider, whom he met when they co-starred in the film Christine.

39. During the relationship with Schneider, he had an affair with German actress, singer and model Nico. On 11 August 1962, Nico gave birth to a son, Christian Aaron "Ari", fathered by Delon. The child was raised mostly by Delon's parents.

40. In December 1963, Schneider and Delon decided to break the engagement.

41. On 13 August 1964, Delon married Nathalie Barthélemy. Their son, Anthony Delon, was born in September. Delon filed for divorce in late 1967 but they continued to live under the same roof.

42. In 1968, during the shooting of the film Jeff, he met French actress Mireille Darc with whom he started a 15-year relationship, lasting until 1982.

43. In 1987, Delon met Dutch model Rosalie van Breemen on the set of the music video for his song "Comme au cinéma" and started a relationship. They had two children: Anouchka and Alain-Fabien. The relationship ended in October 2002.

44. Alain Delon lives in Chêne-Bougeries in the Canton of Geneva, Switzerland with his two youngest children.