49 facts about Pete Sampras: holds the ATP record of six year-end No. 1 rankings
Share Tweet Email 0 Comments
NEXT> 50 facts about Christy Turlington: gained fame in the late 80s and early 90s as a supermodel
Monday, February 24, 2020
STAY CONNECTED WITH US

49 facts about Pete Sampras: holds the ATP record of six year-end No. 1 rankings 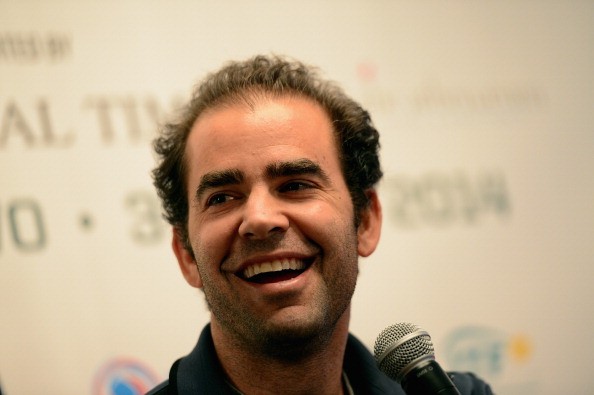 Sampras still holds the ATP record of six year-end No. 1 rankings, which were in consecutive years from 1993 through 1998. Here are 49 facts about Pete Sampras.

1. His name is Petros "Pete" Sampras.

2. He is a retired American tennis player.

3. He is a former world No. 1 regarded as being one of the greatest players in tennis history.

5. Finished his career at the 2002 US Open, which he won, defeating rival Andre Agassi in the final.

6. He was particularly esteemed for his precise serve, earning the nickname "Pistol Pete".

7. Sampras became the first professional to break Roy Emerson's pre-Open Era record of 12 Grand Slam singles titles and retired with 14 titles (seven Wimbledon, five US Open, two Australian Open), though this is no longer the record.

9. Still holds the ATP record of six year-end No. 1 rankings, which were in consecutive years from 1993 through 1998.

11. He is the third child of Sammy and Georgia Sampras.

12. His mother emigrated from Sparta, Greece.

13. His father was born in the United States to a Greek father and a Jewish mother.

14. He attended regular services of the Greek Orthodox Church on Sundays.

15. From an early age, Sampras showed signs of outstanding athletic ability. At the age of 3, Sampras discovered a tennis racket in the basement of his home and spent hours hitting balls against the wall.

16. In 1978, the Sampras family moved to Palos Verdes, California, and the warmer climate there allowed the seven-year-old Sampras to play more tennis.

17. His great idol was Rod Laver, and at the age of 11, Sampras met and played with him.

18. The Sampras family joined the Jack Kramer Club, and it was here that Sampras's talent became apparent.

19. He was spotted by Peter Fischer, a pediatrician and tennis enthusiast, who coached Sampras until 1989. Fischer was responsible for converting Sampras's double-handed backhand to single-handed with the goal of being better prepared to win Wimbledon.

20. On April 6, 2006, three and a half years after his retirement, Sampras resurfaced and played his first exhibition match in River Oaks, Houston, Texas, against 23-year-old Robby Ginepri. Ginepri won the match in two sets. Sampras later announced that he would be playing in World Team Tennis events.

21. 2007 saw Sampras announcing that he would play in a few events on the Outback Champions Series, a group of tournaments for former ATP players who have met certain criteria during their careers. Sampras won his first two events on tour, defeating Todd Martin in both finals (one of which included Sampras's first trip to his ancestral homeland, Greece).

22. Many observers noted that despite his lengthy layoff from competitive tournaments, Sampras still possessed many of the previous skills he had displayed while on the ATP tour, with tennis legend John McEnroe going as far as to say that Sampras would be worthy of a top five seeding at Wimbledon were he to enter the tournament.

24. Sampras was present at the 2009 Wimbledon final between Andy Roddick and Roger Federer to witness Federer eclipse his mark of 14 major titles and become the most successful man in Grand Slam history. Sampras's record of 14 majors had lasted for seven years.

25. In 2010 along with Federer, Andre Agassi and Rafael Nadal, he played an exhibition doubles match at Indian Wells to raise money for the people of Haiti who had been affected by the earthquake.

26. In November 2010 Sampras reported that many of his trophies and memorabilia had been stolen from a West Los Angeles public storage facility. The loss included the trophy from his first Australian Open victory, two Davis Cups, an Olympic ring and six trophies for finishing top in the year-end rankings. Most of the stolen items have since been recovered and returned.

27. On November 17, 2011, Sampras played and lost an exhibition match against Milos Raonic. Sampras' serve approached 200 km/h throughout the night.

28. Sampras was an all-court player who would often serve and volley.

29. Possessing an all-around skill, in the early years of his career, when not serving, his strategy was to be offensive from the baseline, put opponents in a defensive position, and finish points at the net.

30. In his later years, he became even more offensive and would either employ a chip-and-charge strategy or try to hit an offensive shot on the return and follow his return to the net.

31. He was known for producing aces on critical points, even with his second serves.

32. He had an accurate and powerful first serve, one of the best of all time.

33. His second serve was nearly as powerful as his first.

34. Sampras was able to hit winners from both his forehand and backhand from all over the court.

35. He was able to catch attacks wide to his forehand using his speed and hitting a forehand shot on the run. When successfully executed, he won many points outright or put opponents immediately on the defensive, because of the extreme pace and flat nature of the shot. This style didn't help him on clay courts according to some critics.

37. His younger sister, Marion, is a teacher in Los Angeles.

38. His older brother, Gus, has been tournament director at the Scottsdale ATP event.

39. In 2007 his brother became president of the firm managing Pete's business activities.

43. They reside in Lake Sherwood, California.

46. His first professional match was a loss to Sammy Giammalva, Jr. at the February Ebel U.S. Pro Indoor in Philadelphia.

47. Sampras finished 1990 at World No. 5, having started the year ranked World No. 61 just prior to the start of the Australian Open.

48. In 1992, Sampras reached the quarter finals of the French Open for the first of three consecutive years, made it to the Wimbledon semifinals, and was the runner-up at the US Open to Stefan Edberg. Sampras later stated that his loss in the US Open final that year was a "wake-up call" and that he needed to figure out how to become the world number 1.

49. Sampras's only real weakness was on clay courts, where the slow surface tempered his natural attacking serve-and-volley game.