50 facts about Christy Turlington: gained fame in the late 80s and early 90s as a supermodel
Share Tweet Email 0 Comments
NEXT> 46 facts about Jenny Lewis
Sunday, January 19, 2020
STAY CONNECTED WITH US

50 facts about Christy Turlington: gained fame in the late 80s and early 90s as a supermodel 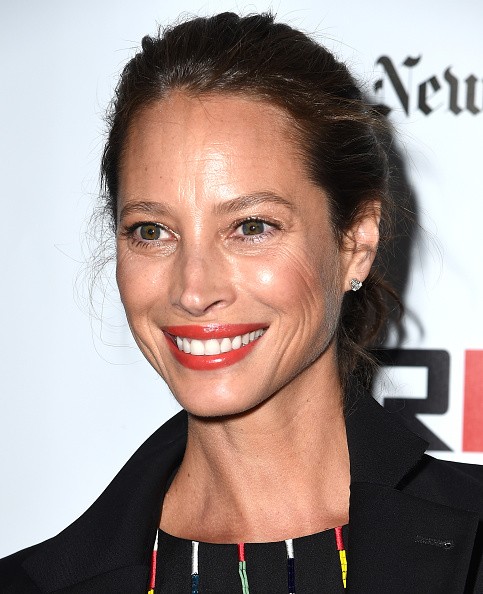 Turlington, Naomi Campbell and Linda Evangelista are called the "Trinity" because of the power and fame that all three gained. Learn 50 interesting facts about supermodel Christy Turlington.

1. Christy Turlington was born on January 2, 1969 in Walnut Creek, California.

2. She is the middle of three daughters.

3. Her father is Dwain Turlington, a pilot for Pan American World Airways.

4. Her mother is María Elizabeth, a flight attendant from Cojutepeque, El Salvador.

5. She was discovered by local photographer Dennie Cody while she was riding a horse in Miami, Florida, where her father was working as a training captain for Pan Am.

6. Turlington began modeling after school from age 14 to 16 and during summers while she attended Monte Vista High School.

7. After turning 18, she moved to New York City to model full-time, and later graduated from high school.

9. She continued her studies at the Columbia University Mailman School of Public Health.

11. She is an American supermodel.

16. Turlington gained fame in the late 80s and early 90s as a supermodel and was during the peak of her career as a top designer favourite.

17. She, Naomi Campbell and Linda Evangelista are called the "Trinity" because of the power and fame that all three gained.

18. In 2010, Turlington founded Every Mother Counts, a non-profit 501(c)(3) organization dedicated to making pregnancy and childbirth safe for every mother.

19. In 2013, Turlington directed the documentary film, Every Mile, Every Mother which explores Every Mother Counts' participation in long distance running to highlight distance as a barrier for women to receive quality care.

20. During the 1990s, she appeared in Unzipped, a documentary about fashion designer Isaac Mizrahi, and the fashion mockumentary film Prêt-à-Porter by director Robert Altman.

21. Additionally, she was featured in Catwalk, a documentary about her life on the fashion runways by director Robert Leacock.

22. She was presented on the November 1999 Millennium cover of American Vogue as one of the "Modern Muses".

26. Fellow model Yasmin Le Bon got her husband Simon Le Bon of Duran Duran to feature Turlington in their "Notorious" video in 1986, at the age of 17.

28. She was added on as the fourth model investor, after Elle Macpherson, Naomi Campbell and Claudia Schiffer of the now defunct Fashion Cafes.

29. She has appeared on over 500 magazine covers and has been featured in several professional photobooks, including Peter Lindbergh's 10 Women, the cover of Arthur Elgort's Model Manual, Herb Ritts Man/Woman, and Karl Lagerfeld's Off the Record.

31. In honor of Turlington's fortieth birthday, W magazine put together a collection of notable images from her career, from runway shots from the late eighties to today.

32. In 2008, casting agent James Scully said in regards to Turlington: "The greatest model of all time! You could combine every model to this day into one person, and they wouldn't come close (sorry, girls)."

33. She featured in the Bally spring/summer 2009 campaign alongside Oriol Elcacho.

34. She has contributed writings to Marie Claire, Yoga Journal, and Teen Vogue along with contributions to the Huffington Post, Canada's Globe and Mail, and the UK's Evening Standard.

35. She has also contributed to NBC's Today Show as a guest correspondent, which included reporting on the status of girl's education in Afghanistan in early 2002 and an interview with H.H. Dalai Lama at his home in Dharamsala, India.

36. She was also an initial product tester for the Apple Watch launch in 2015, participating in the press conference and allowing them to film a segment featuring her use of the Apple Watch to train for a marathon.

37. In 2005 Turlington began working with the international humanitarian organization CARE and has since become their Advocate for Maternal Health.

38. She is also an Ambassador for Product Red.

39. After suffering complications in her own 2003 childbirth, and upon learning that over 500,000 women die each year during childbirth (of which 90% of the deaths are preventable), Turlington was inspired to pursue a Master's degree in Public Health at the Columbia University Mailman School of Public Health.

41. Her involvement with CARE was influenced by her mother, Elizabeth, who has been a longtime CARE supporter through her former flight attendants' organization, World Wings.

42. In September 2010, Turlington participated in a CARE Learning Tour to Ethiopia to investigate the work being done to reduce maternal deaths.

43. She is a member of White Ribbon Alliance for Safe Motherhood and Mother's Day Every Day.

44. An ex-smoker whose father died of lung cancer, Turlington is an anti-smoking activist.

45. Turlington made her directorial debut on the 2010 documentary film No Woman, No Cry. The 60 minute documentary profiles the status of maternal health and focuses on four cases: from Tanzania, Bangladesh, Guatemala, and the United States. The film made its world premiere at the 2010 Tribeca Film Festival in the United States, and the U.S. television broadcast premiere aired on the new Oprah Winfrey Network (OWN) on May 7, 2011. The documentary earned Turlington a nomination for the Do Something With Style Award from the VH1 Do Something Awards.

46. In 2000 Turlington met actor, director, and writer Edward Burns at a Hamptons party.

48. In 2002 and just months after buying a New York property together, they decided to split up. The couple reunited and were married in June 2003.

49. Burns and Turlington have two children.