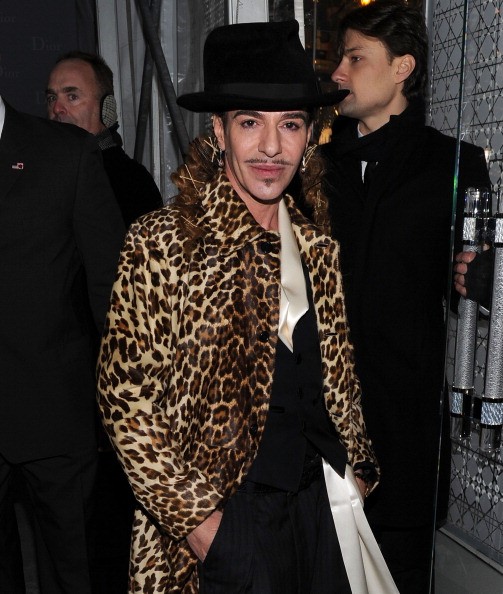 Galliano, who was shy and diffident, often spoke of his struggle to fit in. Recalling his early days, he once admitted: "I don't think people here understood where I was coming from." Learn 40 facts about designer John Galliano.

2. He is a Gibraltar-born British fashion designer.

5. At present, Galliano is the creative director of Paris-based fashion house Maison Margiela.

6. He was born in Gibraltar.

7. He has a Gibraltarian father, Juan Galliano.

8. His mother is Spanish.

10. Galliano's father was a plumber.

11. His family moved to England in pursuit of work when Galliano was six, and settled in Streatham, South London, before moving to Dulwich and later to Brockley.

12. He was raised in a strict Roman Catholic family.

13. Galliano, who was shy and diffident, often spoke of his struggle to fit in. Recalling his early days, he once admitted: "I don't think people here understood where I was coming from."

14. His mother was a flamenco teacher.

15. His mother would dress him in his "smartest" outfit even for a trip to the local shops. His attire, combined with his creative sensibilities, caused him frequent persecution at the London boys' grammar school he attended.

16. After attending St. Anthony's School and Wilson's Grammar School in London, Galliano went on to study at Saint Martin's School of Art.

17. He graduated in 1984 with a first class honors degree in Fashion Design.

18. His first collection was inspired by the French Revolution and entitled Les Incroyables.

19. His first collection received positive reviews and was bought in its entirety for resale in the London fashion boutique Browns.

20. Galliano then started his own fashion label alongside long-term collaborators Amanda Harlech, at that time stylist with Harpers and Queen, and Stephen Jones, a milliner.

22. Media fashion celebrity Susannah Constantine has worked for Galliano, and he has also aided the future success of other designers including shoe designer Patrick Cox.

23. In 1991, he collaborated with Kylie Minogue, designing the costumes for her Let's Get to It Tour.

24. In July 1995, he was appointed as the designer of Givenchy by Bernard Arnault, owner of luxury goods conglomerate LVMH, thus becoming the first British designer to head a French haute couture house.

25. On 21 January 1996, Galliano presented his first couture show at the helm of Givenchy at the Stade de France.

26. Some of Galliano's designs for Givenchy were licensed to Vogue Patterns.

27. He was later replaced in Givenchy by Alexander McQueen.

29. At Dior, Galliano received critical acclaim for his Haute Couture and ready-to-wear collections.

30. In 2010, Galliano identified his love of theatre and femininity as central to his creations; he said "my role is to seduce", and credited Standard Oil heiress Millicent Rogers as an influence.

31. On 6 October 2014, the OTB Group announced that John Galliano joined Maison Margiela to take the responsibility of the creative direction of the house, marking the designer's return to fashion.

32. On the occasion of the annual British Fashion Awards, Galliano presented the Outstanding Achievement Award to Anna Wintour who wore Galliano's first creation for Maison Martin Margiela, "an unambiguous fashion blessing" from the Editor in Chief of American Vogue according to Vanessa Friedman, Fashion Director of the New York Times.

34. In interviews, Galliano has given his full name as Juan Carlos Antonio Galliano-Guillén.

36. In 1997, he shared the award with Alexander McQueen, his successor at Givenchy.

37. Was appointed Commander of the Order of the British Empire in the 2001 Birthday Honours List for his services to the Fashion Industry as a Fashion Designer.

38. He received his CBE on 27 November 2001 at Buckingham Palace in London, England.

39. Received RDI for his contribution to the fashion industry (2002).

40. His family moved the family to South London when he was 6.