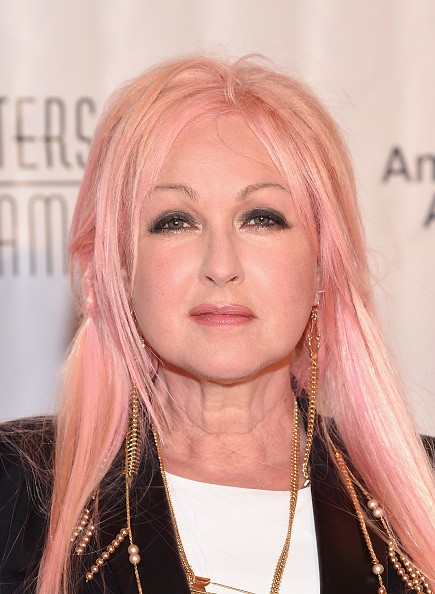 2. Her career has spanned over 30 years.

3. Her debut solo album She's So Unusual (1983) was the first debut female album to chart four top-five hits on the Billboard Hot 100-"Girls Just Want to Have Fun", "Time After Time", "She Bop", and "All Through the Night" earned Lauper the Best New Artist award at the 27th Grammy Awards in 1985.

4. Her success continued with the soundtrack for the motion picture The Goonies and her second record True Colors (1986). This album included the number one hit of the same name and "Change of Heart" which peaked at number 3.

5. Since 1989, Lauper has released nine studio albums and participated in many other projects. Her most recent album, Memphis Blues, became Billboard's most successful blues album of the year, remaining at #1 on the Billboard Blues Albums chart for 13 consecutive weeks.

6. In 2013, Lauper won the Tony Award for Best Original Score for the Broadway musical Kinky Boots, making her the first woman in history to win the composing category by herself.

7. Cyndi Lauper became the first artist in over 25 years to top the dance charts with a Broadway tune.

8. In 2014, Lauper was awarded the Grammy Award for Best Musical Theater Album for the cast recording.

10. Cyndi Lauper won the inaugural Best Female Video prize at the 1984 VMAs for Girls Just Wanna Have Fun. This music video is recognized by MTV, VH1 and Rolling Stone as one of the greatest ever music videos.

11. Cyndi Lauper is featured in the Rock and Roll Hall of Fame Museum's Women Who Rock exhibit.

14. Cyndi Lauper is one of only twenty artists to achieve "GET" status by winning competitive Grammy, Emmy and Tony awards.

15. Cyndi Lauper is also noted for appearing in the first-ever WWE WrestleMania, managing wrestler Wendi Richter who won the WWF Women's Championship in 1985.

16. In 2015 Lauper was inducted into the Songwriters Hall of Fame.

17. To date she has sold over 50 million records and 20 million singles.

18. Cyndi Lauper was born in Queens, New York to a Catholic family.

19. Her father, Fred, was of German and Swiss descent.

20. Her mother, Catrine (née Gallo), is Italian American (from Sicily).

22. Lauper's parents divorced when she was five and her mother remarried and divorced again.

23. Cyndi Lauper grew up in the Ozone Park neighborhood of Queens and as a child, listened to such artists as The Beatles, Ella Fitzgerald, Judy Garland and Billie Holiday.

24. At age 12, she began writing songs and playing an acoustic guitar given to her by her sister.

25. Cyndi Lauper expressed herself with a variety of hair colors, eccentric clothing and even took a friend's advice to spell her name as "Cyndi" rather than "Cindy".

26. Lauper was accepted to a public high school for students with talent in the visual arts but dropped out; she later earned her GED.

28. Her journey took her to Canada, where she spent two weeks in the woods with her dog Sparkle, trying to find herself.

30. In the early 1970s, Lauper performed as a vocalist with various cover bands One was called Flyer in the New York metropolitan area, singing hits by bands including Bad Company, Jefferson Airplane and Led Zeppelin.

31. Although Lauper was performing on stage, she was not happy singing covers.

32. In 1977, Lauper damaged her vocal cords and took a year off from singing. She was told by doctors that she would never sing again, but regained her voice with the help of vocal coach Katie Agresta.

34. Cyndi Lauper received recording offers as a solo artist, but held out, wanting the band to be included in any deal she made. Blue Angel was eventually signed by Polydor Records and released a self-titled album on the label in 1980.

35. Cyndi Lauper hated the album cover, saying that it made her look like Big Bird, but Rolling Stone magazine later included it as one of the 100 best new wave album covers (2003).

36. Despite critical acclaim, the album sold poorly (or " It went lead", as Lauper later joked.) and the band broke up.

37. After Blue Angel broke up and due to her financial problems, Lauper spent time working in retail stores, waitressing at IHOP (which she quit after being demoted to hostess when the manager made a pass at her), and singing in local clubs.

38. In 1981, while singing in a local New York bar, Lauper met David Wolff, who took over as her manager and had her sign a recording contract with Portrait Records, a subsidiary of Epic Records.

43. Because of a friendship with Yoko Ono, Lauper took part in the May 1990 John Lennon tribute concert in Liverpool, performing the Beatles song "Hey Bulldog" and the John Lennon song "Working Class Hero".

45. The greatest hits album, Twelve Deadly Cyns...and Then Some, was released outside of the US in 1994 and reached US audiences in summer of 1995. It included two re-recorded tracks, "I'm Gonna be Strong", originally recorded with Blue Angel, and a reworking of her first hit, newly christened "Hey Now (Girls Just Want to Have Fun)".

47. In November 1998, Lauper released the Christmas album Merry Christmas...Have a Nice Life. The album contained both original material and standards, and was co-produced and mixed by William Wittman.

48. Lauper's TV appearances in 2009 included the American soap opera As the World Turns, performing "Time After Time" as a duet with Allison Iraheta, on the season 8 finale of American Idol and at the 2009 TV Land Awards on April 19 dressed as the "Empress of Evil" for a musical tribute to Sid and Marty Krofft.

49. Cyndi Lauper performed a duet with Leona Lewis on VH1 Divas on September 19, 2009, singing "True Colors", and performed a comedy skit with Eminem at the MTV VMA's in September 2009.