50 Facts About Donald Trump: Trump's Favorite Book is Bible and His Net Worth is $4.5 billion
Share Tweet Email 0 Comments
NEXT> Top 5 Best hoodie men zipper for sale 2016
Thursday, January 23, 2020
STAY CONNECTED WITH US

50 Facts About Donald Trump: Trump's Favorite Book is Bible and His Net Worth is $4.5 billion

5) Trump got a bachelor's degree in economics from the Wharton School of the University of Pennsylvania in 1968.

8) At age 70, Trump will become the oldest and richest person to be president, the first without prior military or governmental service, and the fourth to be elected with less than a plurality of the national popular vote.

12) Trump is of paternal German ancestry and maternal Scottish ancestry.

13) The Trump family were originally Lutherans, but Trump's parents belonged to the Reformed Church in America.

14) Trump's first major real estate deal in Manhattan was the remodeling of the Grand Hyatt Hotel in 1978, located next to Grand Central Terminal.

17) In 2006, Miss USA winner Tara Conner tested positive for cocaine, but Trump let her hold on to the crown, for the sake of giving her a second chance which led to a feud with Rosie O'Donnell.

20) In July 8, 2015 in an interview with CNN's Anderson Cooper, Trump says he "can't guarantee" all of the people he employs have legal status in the US.

22) Trump gets haircuts from his wife Melania.

23) SPY Magazine once sent some of the world’s wealthiest people checks of 13 cents to find out who would deposit them. The only two people to do so were an arms dealer and Donald Trump.

25) Trump once tried to sue an author of the book TrumpNation for $5M because he called Trump a millionaire instead of a billionaire.

26) The character Biff Tannen from the Back to the Future trilogy was based on Donald Trump.

28) Donald Trump says he doesn't drink any alcohol and stated that he has never drank at any time throughout his life.

30) It's been reported that Trump sends around 372 Tweets every month.

32) In 2011, Forbes' financial experts estimated the value of the Trump brand at $200 million. Trump disagreed with this valuation, saying his brand was worth about $3 billion.

33) Trump was named on the initial Forbes List of wealthy individuals in 1982 as having $200 million.

34) Trump himself stated that his net worth was over $10 billion.

35) Trump has twice been nominated for an Emmy Award and has made cameo appearances in 12 movies and 14 TV series.

38) Trump is a WWE fan and a friend of WWE owner Vince McMahon.

39) Trump showed up at WrestleMania 23 in a match called "The Battle of the Billionaires."

40) Trump's campaign tax plan called for levelling the corporate tax rate to 15%, getting rid of various business loopholes and deductions.

43) In order to fight ISIS, Trump in 2015 called for seizing the oil in ISIS occupied areas, using U.S. air power and ground troops.

44) Trump vows to make a more substantial wall on the Mexico–United States border to keep out illegal immigrants, a wall which Trump says Mexico will pay for.

46) Trump has been nicknamed "The Donald" since Ivana referred to him as such in a 1989 Spy magazine cover story.

Must Read: (PHOTOS) 22 Revealing Photos Melania Trump DOESN'T Want You To Know About

48) In an April 2011 interview on The 700 Club, he commented: "I'm a Protestant, I'm a Presbyterian. And you know I've had a good relationship with the church over the years.

49) Trump says that he has never smoked cigarettes or marijuana, or consumed other drugs.

50) Trump once said "Do you know what my first is? The Bible! Nothing beats the Bible." 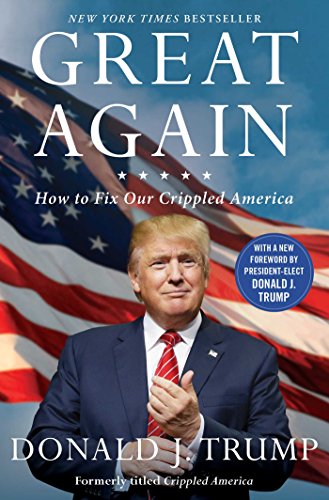 Great Again: How to Fix Our Crippled America (Click for Details)

50 Facts About Donald Trump: Trump's Favorite Book is Bible and His Net Worth is $4.5