Some amazing things about Walmart.

Walmart, the American multinational retailing corporation is the largest retailer in the nation. And, for most customers, it is their favorite because of the price aspect which is much lower than the rest. Though it can be rightly said that Walmart is an innovative company, but it has a complex business model.

If you are a regular at Walmart, here we present 30 amazing things you didn't know about Walmart.

1. Walmart founders Sam Walton served the Army Intelligence Corp for three years. And his brother and co-founder of Walmart, Bud Walton served as a navy pilot during the World War II.

2. When Walmart was launched in the year 1962, it did not have a logo. Moreover, for the first two years, the font and the style of the name, "Walmart" was chosen as per the whims and fancies of the printer.

3. It was after the success of Walton's 5 & 10, a variety store for low-cost goods that Sam Walton and his brother, Bud Walton decided to go big and opened the first Walmart.

4. Statistics and reports suggest that at present Walmart makes an average profit of $1.8 million per hour from the 11,530 stores that it has over 28 countries all over the world.

5. Every week, Walmart witnesses 260 million people shopping at their stores. Well, who would not choose a Walmart if it was situated within 15 minutes of their house.

6. Vermont did not want a Walmart in their state. So, inspite of having an approval to build a store, the company was prevented from doing so by the Vermont Natural Resources Council. This led to a 20 years long battle but it was Walmart that won and the company opened the first store in St. Albans.

7. The year 2012 was a record breaking year as every week the company opened around four to five new Walmart stores.

8. Walmart even proved to be the perfect place for picking your partner. A customer got engaged to one of the cashiers at Walmart after visiting her a lot of times every week and also having small flirtatious sessions during check out. And the surprising part is that the Walmart store was their wedding venue and the wedding cake came from the store's bakery too!

10. Walmart sells a whole number of products. But, do you which one was the highly purchased item in 2012? It was the banana!

12. In the United States, Walmart is the largest solar customer and the company has installed 260 solar projects on the rooftop of the stores. It accounts for almost 30 percent power usage of the store

13. The staff list of Walmart even includes celebrities. The late actor, Corey Monteith worked as the store greeter and comedian Gabriel Iglesias worked at Walmart as a phone seller.

14. TeleNav GPS Systems the largest location based service provider in the United States reported that in 2009 and 2010, Walmart was the most searched business entity.

15. Founder, Sam Walton has implemented the 10-Foot Rule, which requires the staff to look into the eyes of a customer, greet him and ask if he can help, whenever a customer comes within 10 feet. 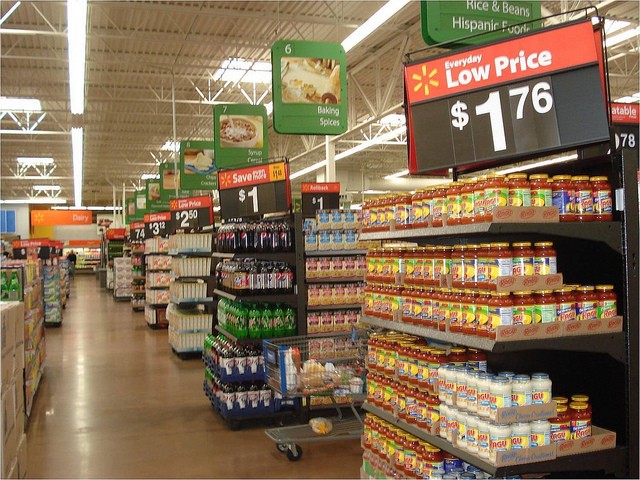 16. During the economically challenging times, though most companies failed to make any profits, Walmart experienced a growth of 60 billion.

17. Though Walmart claims to give its employees a quarterly bonus based on performance, the company has been accused of not passing some part of the profit to the employees, who claim that they are paid much less.

18. The Walton family is the richest family in the world and according to Forbes the worth of Sam Walton's children, Jim, Alice, and Rob is more than $149 billion.

21. Walmart gives preference to hiring part time workers rather than full-time staff. This is because it helps them to cut out the benefits that full-time employees might enjoy.

22. The Scan & Go app that Walmart planned to launch to make check out faster had to be scrapped. This is because, during the testing phase, the customers could not figure out how to use the app to scan the items and self-checkout.

24. With a focus on neighborhood market concept, the company is scaling down it's store size as it has realized that most customers don't wish to walk through the entire store.

25. An average Walmart Supercenter, which might be approximately 200,000 square feet and sells more than 140,000 individual items.

26. For every job opening, the company receives an average of 25 applications.

27. Walmart has 72 different banners under which it operates all over the world. For its international stores, it has different names, like in Mexico, it is Walmex, in the UK it is Asda, in Japan it is Seiyu and in India, it is Best Price.

28. Walmart has the largest employee base of 2.3 million employees, of which 800,000 work in the international stores.

29. The Walmart museum will allow you to take a look at Walton's 5&10, the store which sowed the seed for the most popular brand in the world, Walmart.

30. If the parking space of Walmart stores was combined, it would be equal to the size of Tampa, Florida.

For a big retailer like Walmart, these are just some of the interesting facts about the company.