Americans Were Once Convinced That 'Giants Are Real'- HERE'S WHY
Share Tweet Email 0 Comments
NEXT> 5 Facts About the Most Dangerous Places in the Whole World
Tuesday, October 19, 2021
STAY CONNECTED WITH US

Americans Were Once Convinced That 'Giants Are Real'- HERE'S WHY 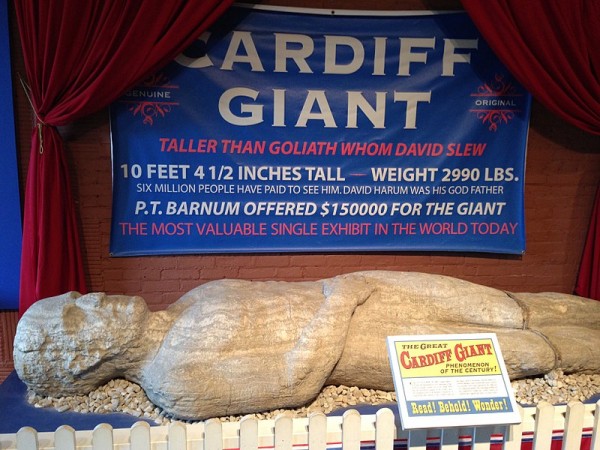 People might think that giants have existed way, way back in the past. To some, they might think giants are just part of a fairytale and its not existent. However, during the 19th century, it was a memorable and questionable time for the Americans and their belief in giants. It was at this time that it was considered the golden age for hoaxes in America. Among these hoaxes is the discovery of a 10-foot "giant" by two men in a New York farm-- where a lot of people questioned the discovery.

Two men reportedly found out a 10-foot-tall giant buried in Cardiff, New York. Hundreds-- in fact it reached a thousand-- of people wanted to see the discovery and would even pay to see it. During that time, the headlines and news were all about the giant discovery, however, there were still people who doubted and questioned if the findings were real.

Here is the full story of the Cardiff giant hoax.

Garnering Attention In The 19th Century

The two men who made the giant discovery was Gideon Emmons and Henry Nichols. The two were digging up a well one day in October of 1869. While doing their usual work, the two happen to come across an unusual foot-figured stone buried three feet underground. According to the two laborers, they uncovered a seemingly giant's figure and even proclaimed that it must have been buried by Indians.

The land where the laborers found the giant figure was William Newell. When Emmons and Nichols found of what is assumed as a giant's body, Newell then announced the discovery to the public. He put up a huge tent around the area where the giant was said to be buried and began charging people, visitors, and tourists, 25 cents per as an entrance fee to the viewing of the buried giant. When people were starting to come on that day and the after, Newell raised the viewing fee to 50 cents after two days. And just like that, Newell was already doing good business since people were eager to see the said buried giant.

As the discovery became popular and popular day by day, people started to call the giant discovery as the "Cardiff Giant." The discovery went on and on like wildfire not only in other states of America but also from people all around the world. It attracted people from everywhere to come and see the giant's body. The Syracuse Journal that time reported that men were starting to leave their jobs and women who were busy taking care of their households and their children also hurried to see the discovery, which became also part of America's history. Many people were gushed and eager to see for themselves how true this discovery is until the number of viewers rose up to a thousand. By the end of the week, there were about 2,500 people who flocked to see the giant's body.

The Debate On The Cardiff Giant

While a lot of people believed that it was a real giant lying in Newell's land, there were also some who debated on its legitimacy. Some points were raised during that time that it was not a giant, but it was a petrified ancient man. Cardiff is a place where you can find countless fossils, and some people suggested that the giant body that was discovered might be one of those ancient relics or preserved eons hundreds of years ago.

Syracuse pastors and other religious believers debated on this issue. According to them, although it was evident that such a figure could have existed, it is also evident that it could be one of the giants that were mentioned in the Scriptures. There were numerous arguments and possible explanations of where the Cardiff Giant originally came, but the truth folded months after and discovered that the Cardiff Giant was a hoax and was carved by a relative of Newell named George Hull.