Hundreds of Mutilated Cows Left by Satanic Groups Across the U.S
Share Tweet Email 0 Comments
NEXT> Another Alien 'Spaceship' Rumored To Be Seen In Mexico Volcano
Friday, January 21, 2022
STAY CONNECTED WITH US

Hundreds of Mutilated Cows Left by Satanic Groups Across the U.S 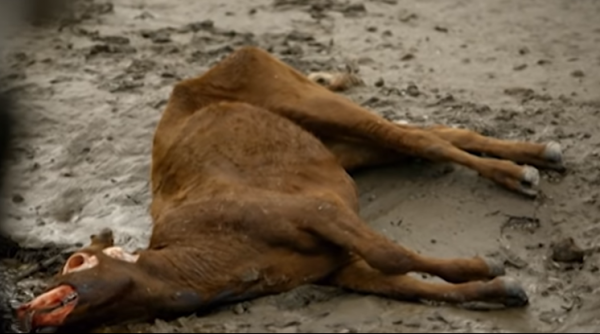 During the 1960s and the 1970s, America saw growth in satanic cults, and this sudden phenomenon can be traced back to one man, Anton Szandor La Vey the author of the 1969's The Satanic Bible. He then founded the very first satanic church in 1966 in San Francisco, and until today, a lot of copycats are forming their own groups, gathering at night and doing rituals in abandoned houses and lots.

These satanic groups does not only recite chants, the rituals that they normally do includes sacrificing animals. Satanic groups across America have been killing cows for years, as they harvest the sexual organs. Bob Larson, an exorcist, told Daily Star Online that thousands of cattle have been killed and mutilated in America over the past 3 decades, and they usually find the dead animals in very mysterious circumstances.

In 2019, cows in Oregon were found to have been drained of blood while on other occasions, the sexual organs of cows have been removed. The locals did not automatically jump to the conclusion that a Satanic group did it, as most of them blamed it on aliens and unknown creates lurking in the shadows at night.

However Larson, who has a book called UFOs and the Alien Index that was published in 1997, shared the reason behind the mysterious animal killing and mutilations, and they are the Satanic groups. Larson said that there are groups of people, secret groups, who uses the sexual organs of animals in their rituals. The precision of the wounds and the fact that almost all of the slain animals had sexual organs missing leads to the assumption that Satanic groups needed them for their rituals.

He also added that these Satanic groups believe that if they can please the devil, they will be given power to do what they want. There are different levels of satanic groups, and the most severe are the ones who perform human sacrifices. Larson said that in different stages, there are self-styled people that make their own rituals of evil, but there are those who are just thrill-seekers and curious people.

Even though there are different levels of Satanic groups and different groups who have different styles of rituals, the bottom line is that the reason behind their behavior is appeasing the Devil, and those who are members of such groups need exorcism.

One reasonable explanation that scientists usually cite is that the animals died of natural causes and that they are torn apart by predators like bears and coyotes. The scientists also added that the areas where the dead and mutilated animals were discovered are known for bear, wolf and coyotes sightings.

Whether it is done by predators or the animals died of other natural causes, the fact remains the same, there are Satanic groups out there who are willing to do rituals and sacrifices for what they believe in. And even though these groups are dangerous as they could also attack humans and they are prone to demonic possessions because of their summoning, Satanic groups are not illegal, however if any forms of harm were done to animals and humans, that is when arrests will take place.