Coronavirus Conspiracy Theory: Did Nostradamus Predicted the Pandemic?
Share Tweet Email 0 Comments
NEXT> What Russia Did With Ice Age Mammoth Bones Will Surprise You!
Friday, March 05, 2021
STAY CONNECTED WITH US 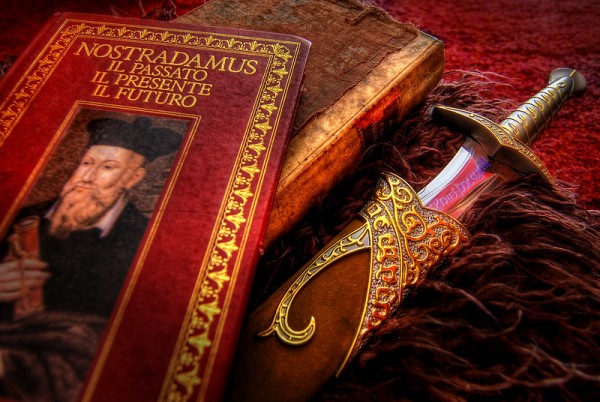 Coronavirus or COVID-19 is now named as a global pandemic. The number of people who are infected is increasing every day, but that is not the only thing that people talk about. A lot of people are sharing their theories about the origin of the virus. In fact, a lot of conspiracy theorists shared their thoughts online and speculations have started about how the pandemic began.

There are those that insist on what was shown on the news, that it is a consequence of eating bat soup, a specialty in Wuhan, China. There are some people who claimed that the coronavirus is the result of an experiment that was done at a secret Chinese laboratory, and since it failed, said virus that is now affecting millions of people worldwide.

But there are people who said that the pandemic is not surprising as it was already predicted in 1981 in the book titled "The Eyes of Darkness." An esoteric expert and ad author of "13 Moons to Becoming Wiccan," Mackenzie Sage Wright, joined the conversation about coronavirus theories, and she gave her own take.

According to her interview with MensVariety, Wright said that the world was warned of the virus back in 1555. She said: "Any fool can see that Nostradamus could see exactly what is happening now with this virus. None of us should be surprised at what's happening. You can only trash the planet for so long before Mother Nature fights back."

One of the most famous names in history, Michele de Nostredame, or Nostradamus, is a sage, prophet and a known clairvoyant. He was a physician in the 16th century and he had recorded numerous predictions and warned about the events that could happen to civilization in the future. The original composition of his work was published in 1555 titled "Magnum Opus Les Propheties."

Those who have studied the work of Nostradamus is now claiming that he predicted the spread of coronavirus. The pointed out that in one of his writings, Century 2:53 warns that "The great plague of the maritime city. Will not cease until there be avenged the death. Of the just blood, condemned for a price without crime."

They believe that the maritime city that he predicted is Wuhan, China because the disease was tracked to a seafood market. The conspiracy theorists believe that there is a strong link between the two.

A pastor and conspiracy theorist, Thomas Thorn, said that there is another prophetic prediction that we all should look at. He said that the text of Revelation 8 proves that the world will end in a "fiery death when an asteroid strikes the planet at the end of the decade." He also said that it is one of the signs of the numerous plagues that are listed in Exodus.

The other plagues have happened, like the "spate of wildfires" that is linked to the Australian bush fires and Amazon bush fires. These are then followed by "great star from heaven, burning like a torch, falling on Earth." and he believes that is next to come.

This is not the first time that Nostradamus' name was brought up after a disaster. Many of his followers claimed that he predicted the Great Fire of London in 1666 and the rule of Adolf Hitler in 1933. But did Nostradamus really predicted all the calamities and events that happened in the last 500 years?

The predictions of Nostradamus came in the form of short poems that has four lines, also known as quatrains. The predictions are riddled with passages and descriptions that are vague and that needs interpretation and deciphering.

Even though the virus has infected more than 200,000 people and it killed more than 8,000 outside China, the virus is still not considered as a plague by experts. Some skeptics believe that his messages are too vague so it should not be taken literally.

A science writer and host of the Skeptoid podcast, Brian Dunning, said that interpreting the work of Nostradamus falls within the realm of conspiracy theories. He also stated that no one has used the predictions of Nostradamus to know what will happen in the future, as those who decipher them only finds a link after an event happened, the quatrains are too vague that it can be fitted into any major event in world history, which makes it not reliable.