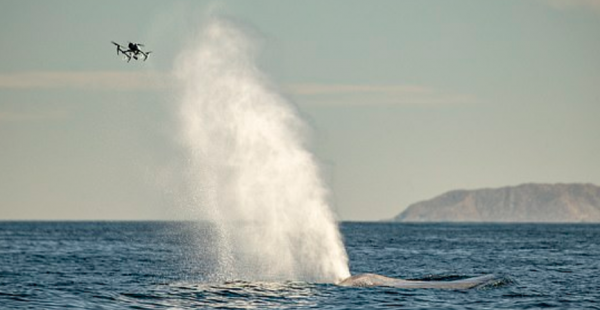 An adorable marine life moment was caught on camera when a blue whale sneezed and it blasted a research drone with snot. The footage was taken by Christian Miller and it shows his team's drone, now named the SnotBot, passing over the head of the whale in Baja, California. The footage shows the snot spouting from the whale's blowhole.

The SnoBot was able to collect matters from the whale's blow and scientists are now using it to analyze and learn more about how blue whales live, about their organisms and about their environment in the deep, blue sea.

Christian Miller said that the incident inspired people and he hopes that it will bring more love and respect for our oceans and marine life. Miller knows that not everyone is as lucky as him and not everyone can witness a majestic moment. Miller, who has the privilege to be close to marine life in different locations around the world said that it is a part of his job to bring the ocean and marine life closer to everybody, and help make some changes to the human's impact on them.

Miller said that the SnotBot drone allows experts to get important information from the precious blue whales, including their hormone, DNA and microbiome samples which give clues about the blue whale's habitat and ecology, without any potentially harmful and uncomfortable procedures.

Miller added that dolphins and whales today face more threats because of the trash and chemicals being thrown in the ocean, and these treats are intensifying and diversifying as years go by. A lot of the marine life are now critically endangered. If we wish to protect these precious animals, we need non-invasive, bold and innovative solutions that can help us gather better and more affordable data for understanding and eliminating these threats on the oceans and marine life.

Miller, who works at Ocean Alliance, said that one of their solutions is the use of drones. The main purpose of Ocean Alliance's SnotBot program is to explore and to push all the boundaries of their research paradigm about the ocean and the marine life, knowing what data can be collected with a drone and how best to collect those data without using any invasive measures.

The incident just proves that contrary to popular belief, a blue whale's blow is not made of water but it is a mixture of bacteria, hot air and moisture immediately condenses in the cool air.

The drone is equipped with Petri dishes that allow it to collect the blow of the whales, and as soon as it catches some materials, it can be analyzed by scientists and provide important clues about the blue whale's ecology and habitat. According to Miller, the blue whale's blow can contain samples of its stress hormones, DNA, microbiome, pregnancy hormones and other indicators of its ecology and habitat.

In 2019, cetaceans were caught playing in the middle of the ocean in Australia by a drone. The footage was captured by Jaimen Hudson, a photography expert, and was shared by the official BBC website. The footage went viral as it surprised the public by the adorable and playful behavior of the animals.

ALSO READ: Center of Yellowstone National Park is Pulsating, Will It Erupt Soon?