New Dinosaur Discovery: Creature is Linked to Raptors, Fast Like a Cheetah 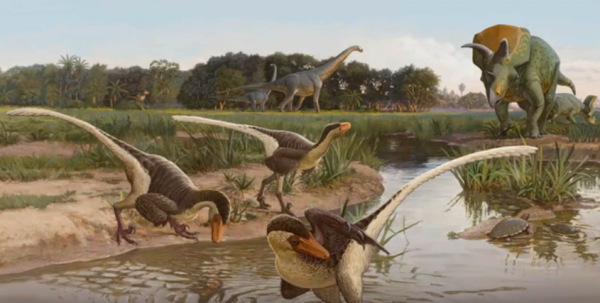 Scientists have recently discovered a feathered dinosaur with large claws that measures around five inches, and they stated that it was one of the last raptor-like dinosaurs to roam the Earth before the mass-extinction. The feathered dinosaur is said to be fast and had a whiplash-like tail that helps them to hunt just like a cheetah.

The new dinosaur was discovered by palaeontologists from the New Mexico Museum of Natural History and Science and they named the newfound creature Dineobellator, to give honor to indigenous people. The research has been published in the journal Scientific Reports.

Numerous experts from the State Museum of Pennsylvania have been researching and studying the newly dug up species and according to them, the Dineobellator is the last of the raptors. According to Dr. Steven Jasinski, a study author and palaeontologist at the State Museum of Pennsylvania, Dineobellators had very sharp teeth and very strong forelimbs and legs that allowed it to rip its prey into tiny bits.

Dineobellator means "Navajo Warrior", and it is a raptor that was around three and a half feet tall and seven feet long, it also had a massive, powerful tail. Dineobellators are said to be a bit larger than Velociraptor, a dinosaur made famous by Jurassic Park, but according to Dr. Jasinski, Dineobellators is more terrifying.

Dr. Jasinski said that Dineobellators would have been larger than a wolf but they would have weightless because the creatures were built for speed and agility. It has crescent-shaped claws, three on each of its food, and it was like talons that were ready to grab on its prey.

The remains of the Dineobellator were discovered in San Juan Basin, New Mexico, and it is known as the graveyard for dinosaurs. Palaeontologists dug up parts of its skull, the ribs, spine, wing bones, and leg. They said the creature lived 67 million years ago, which is less than a million years before dinosaurs were wiped out by an asteroid strike.

Dineobellators are said to belong to a family of theropod dinosaurs that are called dromaeosaurids, which means "running lizards" ad they are direct descendants of modern birds.

Importance of the discovery

Palaeontologists are thrilled about the new discovery, according to Dr. Jasinski, understanding what happened in the past can help us prepare for the future, the history pattern can give up clues as to what we should do to try to change things for the better.

Following the newly dug up Dineobellators, Dr. Jasinski stated that he plans to continue his field research in New Mexico where dinosaur fossils are believed to be buried.

Dr. Jasinski said that with a lot of searching, studying and luck, they may find more dinosaurs in New Mexico, as they are believed to be weathering out of a small hillside. Looking for fossils is not easy as it requires hiking, and it is easy to overlook a spot, miss a side or walk in the wrong area. He hopes that they can do more research so they can find other dinosaurs that live alongside the  Dineobellator.