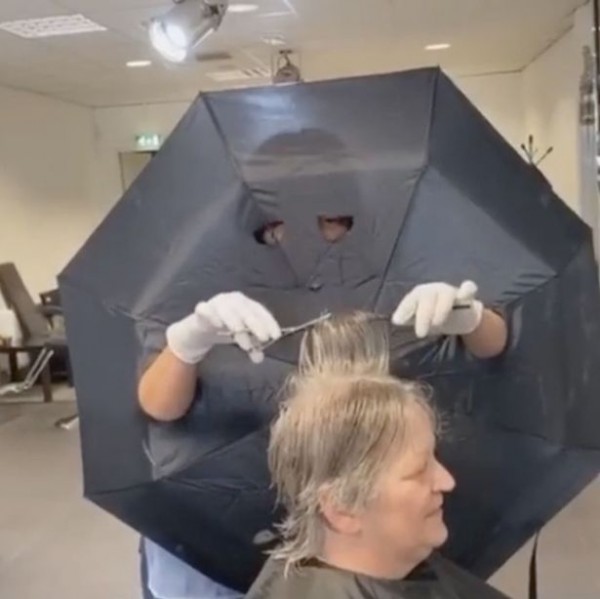 As the coronavirus pandemic continues to spread across the world, millions of people are now taking precautionary measures. One of them is a hairdresser who works at the Bella Rosa salon ins Oss, Holland. She has gone viral for her unique method to create a safety barrier between her and her customers.

What the hairdresser did was cut holes into an umbrella for her eyes and her arms, and it allowed her to wear it while she goes to her hair appointments. She also included a pair of disposable gloves as a part of her protective measures as she continues to work at the salon.

The viral clip was posted on Facebook and now has more than 92,000 shares. One the said clip, a laughter can be heard in the background and the caption of the clip said: " 'this is not going well."

The said hairdresser was forced to cut another hole in her umbrella protective suit so she can thread her customer's eyebrows. The clips were seen by thousands of people and a lot of netizens voiced their opinion on what they saw. As reported by the Daily Mail, numerous people found the whole ordeal hilarious and some praised the hairdresser for her inventive solution.

One netizen commented that the hairdresser was Superwoman who have an invention for everything, another laughed and called it a brilliant idea while one netizen said that the makeshift protective suit was crazy.

Because of the shortage of protective suits, a lot of people have come up with amazing ways on how they can protect themselves from the virus. If the hairdresser from Holland used an umbrella as a barrier, some women are using their bras as face masks. The citizens are not the only ones who are using everyday supplies as protective suits, even nurses in New York are now using garbage bags as protection because of a shortage in hospital gowns.

European countries such as Belgium, France, Italy, Spain, Denmark, Austria, and Switzerland have all gone into total lockdown. However, Holland is still business as usual. This is because Holland's Prime Minister Mark Rutte believes that social distancing will only prolong the effects of the virus, and the Dutch population should be exposed to the virus so that they can form an immunity to it and society can go back to normal as fast as possible.

On March 27, UK Prime Minister Boris Johnson ordered a lockdown after he was tested positive for the coronavirus. Although he had imposed community quarantine and encouraged the citizens to stay at home, a lot of the businesses were still open and thousands of people still gathered in the streets, went to the market, drank in the pubs and hang out in the park.

But after the number of infected rose in the UK, including the Prime Minister and Prince Charles, Johnson released a statement that the UK will be on lockdown for 21 days. Although he is experiencing mild symptoms, he will continue to address the public and work with the officials during the lockdown.

ALSO READ: Funny Coronavirus Jokes That Will Make Smile Despite This Worldwide Crisis