Straight Out of a Movie: Orange Mushroom-Like Cloud Spotted In Portugal
Share Tweet Email 0 Comments
NEXT> Yikes! Terrifying Monster Encounters That Will Surely Send Chills Down Your Spine
Sunday, February 28, 2021
STAY CONNECTED WITH US

Straight Out of a Movie: Orange Mushroom-Like Cloud Spotted In Portugal

Who said what you saw in "Independence Day" movie can't be seen in real life? 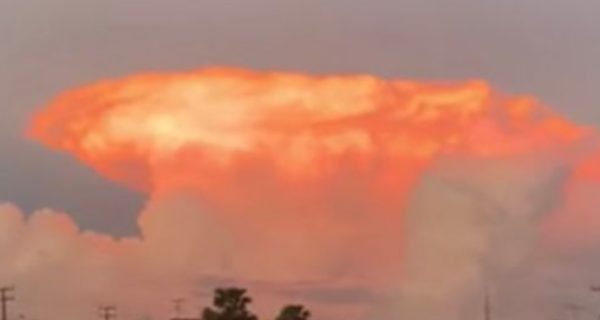 An orange mushroom-like cloud appeared over Portugal and it has since been compared to a scene in the blockbuster apocalyptic movie Independence Day. The bizarre footage showed the massive orange cloud spanning a huge distance across a highway. In other angles, it shows that lightning under the cloud was starting to form.

The viral video was captured on March 20, and it has since been passed around on social media and being shared and discussed by conspiracy theorists. One of them is YouTuber Disclose Screen, he said he was confused about what he saw and he didn't understand why the orange cloud was forming. He said "No information was given but I do get from the comments that the language is Portuguese. I'm not saying this is anything unnatural but this is one hell of a capture."

He added that the orange cloud reminded him of a scene from the film Independence Day and he said that he is not a religious person but he knows that if the end of the world coming, there will be signs.

Viewers left comments on the video to express their amazement on the footage. One said that the entities are revealing its arrival from the depths of the earth. Another viewer went dark and wrote that we are all going to die today.

The spokesman for the Met Office, Grahame Madge, has explained to Daily Star Online that the cloud in the footage is known as a cumulonimbus cloud. He said that currently there are unsettled conditions across parts of North Africa and Iberia. One of the features of this unsettled weather has been the development of thunderstorms, from cumulonimbus clouds.

Madge added that the towering giants can build until they reach the top of the troposphere. A troposphere is a part of the atmosphere that is containing our weather. The anvil shape was formed when the cloud failed to climb to the troposphere and it fanned out.

Madge added that cumulonimbus clouds are very common above Europe, and they can be visible given the right conditions. When the sun shines on them, the details of their vast and ominous form can be seen by the naked eye.

On March 18, an incredible roll cloud appeared on the shore at Rhode Island in America. The people who were able to witness the amazing sight compared the scene to the film The Day After Tomorrow. However, meteorologists said that there is nothing to worry about since the scene is linked to unstable air and thunderstorms.

The cloud seen in Rhode Island was a roll type Arcus cloud. This kind of cloud is long, thin and low-level. The cloud forms when a cold downdraft from a cumulonimbus cloud reaches the ground and the air immediately spread along the ground. It then pushed the existing warm air upwards.

As the air rises, the water vapor condenses into the patterns that are linked to Arcus clouds. The Arcus cloud was also sighed on a beach in Brazil in 2019, which caused a mass panic.