A Rabbi Claims That Fighting WIld Monkey in Thailand is Connected to The Bible
Share Tweet Email 0 Comments
NEXT> Africa's Loch Ness Monster: What is a Mokele-mbembe?
Sunday, February 28, 2021
STAY CONNECTED WITH US 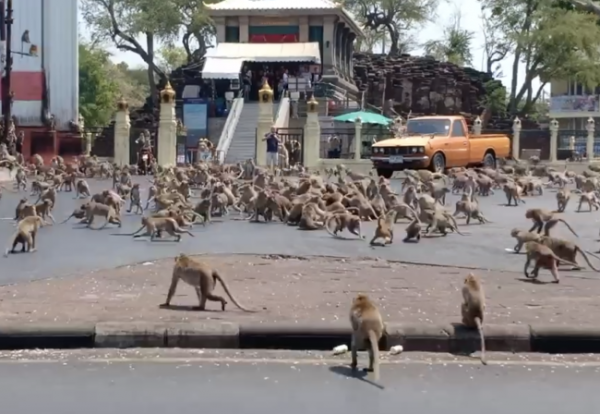 Thailand is currently on lockdown to stop the spread of the virus. Because of this, thousands of tourists were sent home, and one of the devastating side effects is leaving hundreds of starving monkeys behind. Although this effect can be explained by logic, a rabbi from Israel named Rabbi Yosef Mizrahi said that the troop of monkeys terrorizing the streets in Thailand can be connected to a verse in The Bible and has a spiritual meaning behind it.

Rabbi Mizrahi did a lecture in New York and he said that a verse in the bible is linked to the recent influx in the East Asian country. He referred to Deuteronomy 7:22, which states that those who obey God's laws are blessed, while those who disobey him will suffer a plague.

The rabbi stated that Thailand appeals to tourists because there are not a lot of modest things going on in the country. Tourists often feed the wild monkeys who are roaming the streets, but since the country is now empty due to the virus, the wild monkeys are not being fed enough.

Rabbi Mizrahi also stated that the wild monkeys are now viciously attacking the locals because they are starving and are demanding food. He then referred to the passage and connected the country's problems to 7:22 in Deuteronomy 7 which read: "Hashem your God will dislodge those peoples before you little by little; you will not be able to put an end to them at once, else the wild beasts would multiply to your hurt."

Just like hundreds of countries around the world, Thailand is experiencing a decline in tourism and problems with its economy since the coronavirus pandemic began in January 2020. Millions of people around the world have been affected as businesses closed, flights canceled and plans have been halted as borders around the world are shutdown.

Thailand made it into the world news after a local named Sasaluk Rattanchai captured the monkeys fighting over a banana. Monkeys are considered sacred in the country, so they are allowed to roam the streets. They are also notorious for stealing food from residents and tourists.

The street brawl between a gang of monkeys surprised the locals since they stated that they have never seen the animals act that way before. The monkeys were normally well-fed, but since the lockdown, they've been searching the streets of Lopburi, central Thailand for food.

The local government of Lopubri is now looking for ways to feed the monkeys before they wreak havoc. Residents and the government will team up to feed the animals while they are on lockdown.

On March 25, 2020, the government of Thailand announced that they will extend its lockdown until April 30th. All flights going in and out of the country will be canceled and only locals and foreigners with special permits will be allowed to enter.

Currently, there are 1,524 reported cases of coronavirus patients in Thailand. The country is performing mass testing on its locals and the number is expected to rise while they detect new cases.

ALSO READ: Did Nostradamus Predict the Pandemic of 2020?