The Sight of This Orangutan Playing with Otters Will Make Your Day
Share Tweet Email 0 Comments
NEXT> Alien Technology Discovered in Mars Which May Prove That ET is Real
Wednesday, April 21, 2021
STAY CONNECTED WITH US

Now that almost every human being in the whole world is in quarantine and lockdown, limiting human interaction, many photos are surfacing in tabloids and online news about animals coming back. There are also pictures that show cute and funny relationships between certain animals, such as a photo of an orangutan at the Pairi Daiza Zoo in Brugelette, Belgium who was seen happily playing with a group of otters in a river. 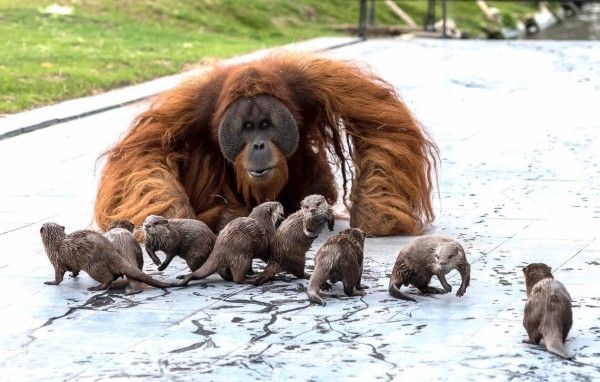 In the zoo, there is a free-flowing river that flows through the zoo's Indonesian Flower Temple. The temple was known to be a home of a huge family of orangutans. However, these monkeys were unaware that they also have neighbors who live in the river.

In the photo taken, it showed an image of an orangutan who seem to be happily interacting and playing with a group of otters, which are their neighbors in the river's temple.

According to Pairi Daiza's spokesperson Mathier Goedefroy in an interview with Lonely Planet, the otters were coming out of the river and they happen to do it all the time on the orangutan's area. The little river rascals love to go and play with the orangutans almost every day and they seem to be very good friends with them as well. 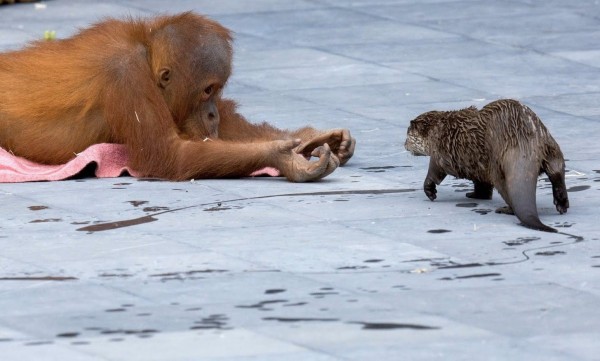 The zoo named some of their orangutans and in the viral photo, it showed baby Berani and daddy Ujian, and they seem to have a special bond between their river neighbors.

It is vital for orangutans to be kept busy

Goedefroy also explained that there are some animals, just like orangutans and other monkeys, who have proper socialization traits in their system, and these socialization traits are critical to an animal's mind stimulation. It has also become an integral part of their being and finding other creatures or animals to socialize with has been their main thing. 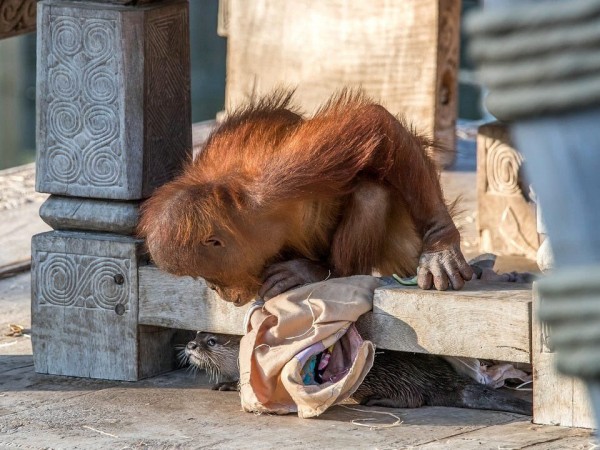 For orangutans, who happen to have 97% of human DNA, love to be entertained into something they enjoy. It is vital for animals like orangutans to be occupied, kept busy physically, mentally and emotionally, and they should always be challenged at all times as possible. If not, just like humans, they will get bored.

The zoo has always been very involved in their animal's lives and activities. Thus, they let their orangutans roam around the temple for them to socialize with other species. This also serve as an enrichment program for the orangutans. Sometimes, on-duty zookeepers even keep them entertained with riddles, puzzles, and mind games that are good for the orangutans' well-being. 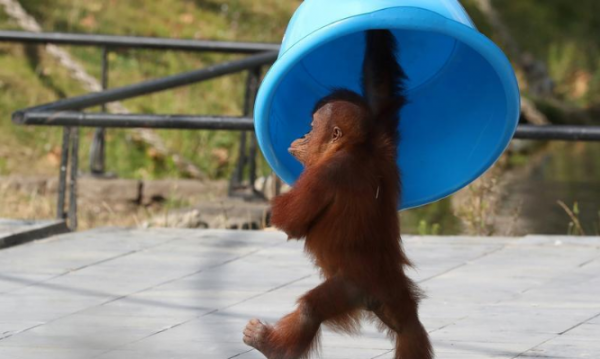 The zoo gives importance to their animals, especially those who's brains are wired closely to a human brain, to keep them sane. For orangutans, they need to be kept busy for them to not feel bored. However, despite if they are not being entertained by their zookeepers, orangutans also have a way of keeping themselves entertained, this, they play with other animals near them.

The orangutans that were featured in Pairi Daiza garnered attention on the internet and humans find it cute that animals have their own way of enjoying their "quarantine" time amidst the global pandemic.