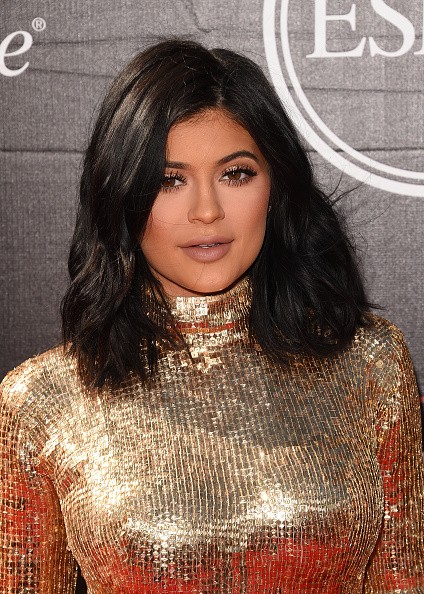 2. She was born and raised in Los Angeles, California.

3. Kylie Jenner she is best known for appearing on the E! reality television series Keeping Up with the Kardashians.

4. In 2012, she collaborated with the clothing brand PacSun, along with her sister Kendall, and created their own line "Kendall & Kylie".

6. Time magazine named the Jenner sisters in "The 25 Most Influential Teens of 2014" for their considerable influence among teens on social media.

10. Kylie Jenner also has three older half-brothers from Caitlyn's side of the family - Burt, Brandon, and Brody Jenner - and an older half-sister, Casey.

11. Kylie's mother Kris is of Dutch, English, and Scottish ancestry.

12. Kylie attended Sierra Canyon School, where she was a member of the cheerleading team.

13. In 2012, she decided homeschooling would be a better option and enrolled in an at-home education program, from which she graduated with a high-school diploma in July 2015 from Laurel Springs School.

14. In 2007, Kylie, along with her parents and siblings, Kendall, Kourtney, Kim, Khloé, and Rob, began appearing in the reality television series Keeping Up with the Kardashians, which chronicles the personal and professional lives of their family members.

16. Kylie Jenner has two nail lacquers from the Nicole by OPI nail polish brand called Wear Something Spar-kylie and Rainbow in the S-kylie.

18. On November 15, 2013, the Jenner sisters announced that they would launch The Kendall & Kylie collection with PacSun which launched on February 2013.

19. Since its conception, the sisters have released several collections for this line.

20. In July 2013 the Jenner sisters launched a jewelry line with Pascal Mouawad's Glamhouse to create the Metal Haven by Kendall & Kylie jewellery collection.

25. Kylie Jenner, along with her sister Kendall, have co-hosted numerous public events together.

27. The Jenners also interviewed the cast of The Hunger Games premiere in the Bing Box at The Nokia Theatre L.A. Live on March 12, 2012.

28. The Jenner sisters co-hosted the 2014 Much Music Video Awards, where Kylie made her acting debut in a promo for the show in Toronto, Canada, on June 15, 2014.

29. Kylie Jenner began her modeling career with the Sears line "Crush Your Style" and has done photo shoots with photographer Nick Saglimbeni and modeled for her cousin Natasha's clothing company.

30. Kylie Jenner has also expressed an interest in acting, but has explained that college is a greater priority.

31. Kylie Jenner announced that she hopes to pursue an acting career, saying "Right now I love designing and I want to pursue that career once I turn 18, but acting is something I would regret not giving a chance when I'm older, so I would love to try it and see if I like it, I used to do plays in school and then in my community. I would participate in all of them 'til I was 13".

33. In 2011, Seventeen magazine featured Kendall and Kylie Jenner as Style Stars of the year, and selected them as "Style Ambassadors" for the magazine.

35. The novel was criticized upon release as a ghostwritten work, which prompted Sloan to clarify that the book was compiled and edited from the Jenner sisters' original ideas.

37. Kylie Jenner set up an eBay account where she auctions old clothing to raise money for the Children's Hospital Los Angeles.

39. Kylie Jenner joined her family in a charity yard sale on November 10, 2013. Proceeds from the sale were donation-matched and sent to Share Our Strength: No Kid Hungry and the Greater Los Angeles Fisher House Foundation.

40. Kylie Jenner Kylie joined Khloe Kardashian, her sister Kendall, Lil Twist, and The Game at PINZ bowling alley in Studio City, California for a charity bowling game on January 19, 2014. The event was held to raise money for The Robin Hood Foundation, a nonprofit for which The Game pledged to raise $1 million in donations.

41. The Jenner sisters participated in singer Chris Brown's two Kick'n It For Charity Celebrity Kickball games in Glendale, California on July 19, 2014 and on August 16, 2014.

43. In February 2015, Jenner purchased a $2.7 million five-bedroom, 5.5-bath mansion in an upscale gated community in Calabasas, California, which she will make her primary residence upon her 18th birthday.

44. Jenner started dating rapper Tyga in 2014 which sparked controversy from their age differences.

45. She is a close friend of singer Pia Mia.

46. Kylie Jenner dmitted to getting a lip augmentation on a episode of Keeping Up with the Kardashians when it aired in May 2015.

47. Her enhanced lips from lip fillers created speculation and gained her publicity.

48. She stated before the episode she just used lip liner and over lined her lips.

49. Fans enlarged their lips with implements such as bottles and posted the results online to compete in the "Kylie Jenner Challenge". Jenner replied by tweeting "I'm not here to try & encourage people/young girls to look like me or to think this is the way they should look."

50. Other celebrities such as English-Romani singer Cher Lloyd also responded and disapproved the challenge.