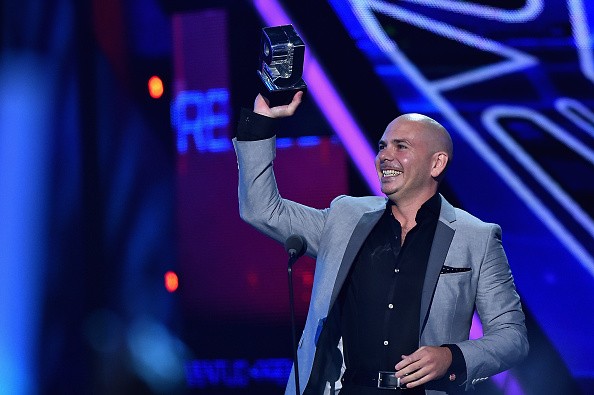 He managed to graduate and began to focus on his career, hanging out in clubs and performing wherever he could. Learn 50 facts about Pitbull.

2. He has been featured on tracks by such pop-chart mainstays as Usher, Enrique Iglesias, Jennifer Lopez, Shakira, and Janet Jackson.

4. On the business side, Pitbull launched his own Polo Grounds Music/J Records imprint (Mr. 305 Records).

5. The Miami native was awarded his hometown's Key to the City as a thank-you for the positive PR he has brought Florida's nightlife capitol.

6. Pit learned the power of words from a young age. His parents were first-generation Cuban immigrants, and his father taught him to recite the words of Cuban poet and independence leader José Martí in the bars in Miami's Little Havana.

7. After his parents split, Pit had a complicated relationship with his father, who made a significant amount of money in the streets, but found that money that comes quick, leaves quicker.

8. His mother also struggled to make ends meet, and Pit shuttled from one run-down home to another, even spending time with a foster family in rural Roswell, Georgia.

9. Inspired by Nas and The Notorious B.I.G., Pit began rapping in high school after his mother kicked him out for dealing drugs.

10. He managed to graduate and began to focus on his career, hanging out in clubs and performing wherever he could.

11. Pit caught a break when Lil Jon invited him to appear on his 2002 album Kings of Crunk, and capitalized on the opportunity by following it up with several well-received mixtapes.

13. Through collaborations with his mentor Lil Jon, Pit scored a number of club smashes, including "Krazy" and "The Anthem."

14. After leaving and signing to Polo Grounds Music/J Records, Pitbull continued to be recognized for his work, winning the first-ever "Latin Digital Download Artist of the Year" award at the 2009 Billboard Latin Music Awards.

15. Pitbull also released "Timber" in October 2013 from his EP album Meltdown and was a global hit, reaching number one in many countries and making it to number one on the Billboard Hot 100 and the UK Singles Chart for a total of 20 number-one positions worldwide.

16. He performed the song in different award show including the 2013 American Music Awards, in which he was the host.

17. He was chosen by FIFA and Sony Music to write and record "We Are One (Ole Ola)" along with Jennifer Lopez and Claudia Leitte, which served as the official song of the 2014 FIFA World Cup.

18. Pitbull was born to Cuban expatriates in Miami, Florida.

19. He was influenced by the Miami bass genre of pop music and has cited Celia Cruz and Willy Chirino as sources of inspiration for his music.

20. He said he chose his stage name because pitbulls "bite to lock. The dog is too stupid to lose. And they're outlawed in Dade County. They're basically everything that I am. It's been a constant fight".

21. Pitbull's song "Oye" was featured on the soundtrack to the film 2 Fast 2 Furious the following year.

23. In 2010, Pitbull took part in the "So Kodak" campaign for the Kodak brand with Drake, Rihanna, and Trey Songz.

24. He also launched a partnership with the soft drink giant Dr Pepper as part of the campaign "Vida 23" for which he recorded the song specifically featured on his album Armando.

25. Pitbull has also purchased an equity stake in Miami Subs Pizza and Grill.

26. Pitbull visited Kodiak on July 30 where he received a key to the city from Mayor Patricia Branson and then made an appearance before a crowd of hundreds at the Coast Guard base.

27. In November 2013 he started a fragrance with Jacavi Worldwide and Parlux Ltd.

28. Pitbull was the featured speaker at the official opening of the new charter middle and high school Sports Leadership and Management (SLAM), which he helped build on August 19, 2013 in Miami's Little Havana, the neighborhood where he grew up. The school will be run by the non-profit Mater Academy.

29. In 2001, Pitbull was introduced to Robert Fernandez of Famous Artist Music & Management, an independent label and management company specializing in developing artists, by the Diaz Brothers, a producer duo signed to the company. Fernandez "saw the eagerness and hunger he had" and, with the Luke Records deal ending, began working to develop Pitbull.

31. He joined the Anger Management Tour, the 2000 hip-hop concert tour headlined by Eminem and 50 Cent.

33. In 2005 Pitbull and rapper Sean 'Diddy' Combs co-founded Bad Boy Latino, a subsidiary of Combs' Bad Boy Records label. It primarily focuses on Latin hip hop, Latin soul, Latin pop and other Tropical music, and has offices in New York and Miami, Florida. Along with co-founding it, Pérez currently heads the A&R division of the label.

36. On Listennn... the Album, the debut album by Terror Squad member and Miami radio personality DJ Khaled, Pitbull performed on three singles: "Holla at Me" and "Born-N-Raised" alongside other Southern-based rappers.

38. He has been tapped by the Miami Dolphins to work alongside T-Pain and Jimmy Buffett to release a new fight song for the Dolphins.

40. Another popular single from 2009 was "Blanco", featuring Pharrell Williams of The Neptunes from the soundtrack to the movie Fast & Furious. Pitbull recorded a remix with Mexican pop diva Paulina Rubio for her single Ni Rosas Ni Juguetes in November 2009.

41. In 2010, Pitbull performed the rap section in the Haiti benefit song "Somos El Mundo", a Spanish version of "We Are the World", that included a huge group of Latin artists led by Emilio and Gloria Estefan.

42. He was also a featured guest on Janet Jackson's "Heart, Beat, Love" in addition to "Armada Latina", the fourth single off the album Rise Up by Latin rap legends, Cypress Hill.

45. He also won Telehit's award for "Most Popular Artist".

48. Pitbull, Jennifer Lopez and Claudia Leitte performed the song "We Are One" at the opening ceremony of the 2014 World Cup.

49. In June 2014, it was announced that Pitbull would be receiving a star on the Hollywood Walk of Fame.

50. On October 18, 2014, Pitbull released another single titled "Celebrate" which was included on the Penguins of Madagascar soundtrack and later included on the album Globalization.