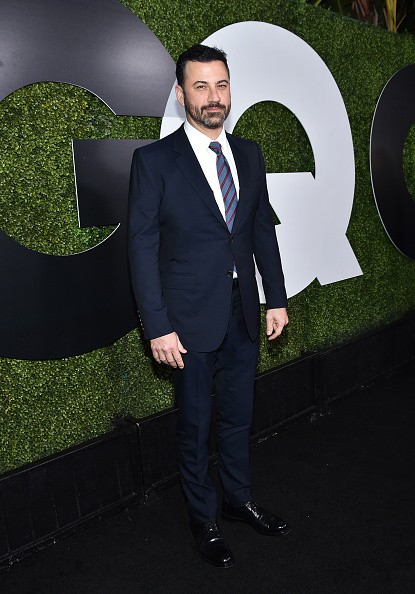 50 facts from life and career of television host Jimmy Kimmel.

3. He is the host and executive producer of Jimmy Kimmel Live!, a late-night talk show that premiered on ABC in 2003.

5. Prior to hosting Jimmy Kimmel Live!, he was best known as the co-host of Comedy Central's The Man Show and Win Ben Stein's Money.

6. Kimmel has also produced such shows as Crank Yankers, Sports Show with Norm Macdonald, and The Andy Milonakis Show.

7. Kimmel was born in Brooklyn, New York, and grew up in the neighborhood of Mill Basin.

8. Is the eldest of three children.

9. His mother Joan is a homemaker.

10. His father James Kimmel is an IBM executive.

13. Kimmel's mother is of Italian ancestry.

14. Two of his paternal great-great-grandparents, Theresa and Christian Kimmel, were German emigrants.

15. The family moved to Las Vegas, Nevada, when he was nine years old.

17. Kimmel's uncle, Frank Potenza ("Uncle Frank"), appeared on Jimmy Kimmel Live! as a regular from 2003 until his death in 2011. His cousin, Sal Iacono, performed Kimmel's former co-hosting duties during the last season of Win Ben Stein's Money and then became a writer and sketch performer on Jimmy Kimmel Live!

20. In 1989, Kimmel landed his first paying job alongside Voss as morning drive co-host of The Me and Him Show at KZOK-FM in Seattle, Washington.

21. Kimmel and Voss were fired by KZOK and were fired again a year later at WRBQ-FM in Tampa, Florida.

22. Kimmel went on to host his own show at KCMJ in Palm Springs, California, where he persuaded a young Carson Daly to drop out of college and become his intern. After a morning stint at KRQQ in Tucson, Arizona, Kimmel landed at KROQ-FM in Los Angeles.

23. He spent five years as "Jimmy The Sports Guy" for the Kevin and Bean morning show. During this time he met and befriended a struggling comedian named Adam Carolla.

24. Kimmel began his television career as the comedic counterpart to Ben Stein on the game show Win Ben Stein's Money, which began airing on Comedy Central in 1997. His quick wit and "everyman" personality were counterpoints to Stein's monotonous vocal style and faux-patrician demeanor. The combination earned the pair an Emmy award for Best Game Show Host.

25. In 1999, during his time with Win Ben Stein's Money, Kimmel co-hosted (with Carolla) and co-produced (with Daniel Kellison), Comedy Central's The Man Show.

27. His other television work included being the on-air football prognosticator for Fox NFL Sunday for four years.

29. On April 6, 2007, Kimmel filled in for Larry King on Larry King Live. That particular broadcast dealt with paparazzi.

30. He has had numerous appearances on other talk shows including, but not limited to, Live with Regis and Kelly, The Howard Stern Show, The Ellen DeGeneres Show, and the Late Show with David Letterman.

33. He has appeared on ABC's Dancing with the Stars, along with his parking lot security guard Guillermo.

34. He hosted the 64th Primetime Emmy Awards which aired on September 23, 2012, marking his first time hosting the event.

37. He had a relationship with comedian Sarah Silverman from 2002 until they broke up in March 2009.

42. Was a guest performer at a July 20, 2008, concert in Costa Mesa, California, featuring The Mighty Mighty Bosstones, performing with the group on the song "The Impression That I Get."

43. Kimmel has spoken publicly of being a narcoleptic.

45. Kimmel guest hosted Live with Regis and Kelly during the week of October 22-26, 2007, commuting every day between New York and Los Angeles. In the process, he broke the Guinness World Record for the longest distance (22,406 miles (36,059 km)) travelled in one work week.