50 facts about Jennie Garth: known for starring as Kelly Taylor throughout the Beverly Hills, 90210
Share Tweet Email 0 Comments
NEXT> 50 facts about singer Colbie Caillat
Sunday, February 16, 2020
STAY CONNECTED WITH US

50 facts about Jennie Garth: known for starring as Kelly Taylor throughout the Beverly Hills, 90210 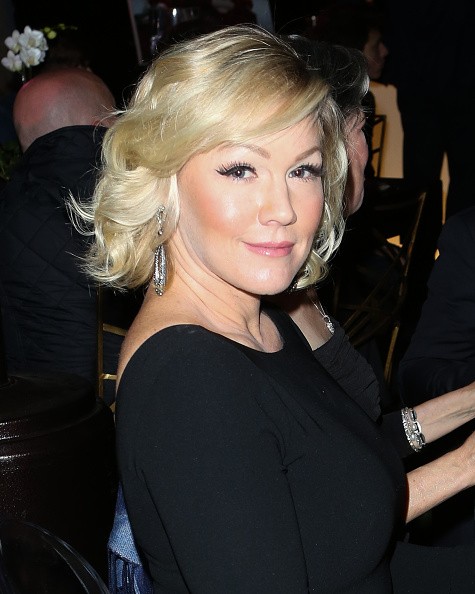 3. Garth is known for starring as Kelly Taylor throughout the Beverly Hills, 90210 franchise.

5. In 2012, she starred in her own reality show, Jennie Garth: A Little Bit Country on CMT.

7. She is the youngest of seven children.

8. Garth spent much of her youth on a 25-acre horse ranch in Arcola, Illinois.

9. For a time her family stayed in Tuscola, Illinois; but eventually they settled in Glendale, Arizona, when Garth was around thirteen years old.

12. Was discovered at a local talent competition by Hollywood scout and manager, Randy James.

13. She attended Greenway High School as a freshman and transferred to Apollo High School in her sophomore year.

14. Determined to become an actress, Garth would receive audition materials from Los Angeles that she would work on with local acting coach, Jean Fowler.

15. She left school during her junior year to work with James in Los Angeles.

16. She later obtained her high school diploma in California.

20. Throughout the series of Beverly Hills, 90210, Garth's character faces several trials and tribulations, along with difficult issues regarding family and her romantic life. Garth displayed an exceptional understanding of the character's struggles and triumphs, portraying Kelly in a relatable way which made her one of the most developed and popular characters on the show.

22. She also directed two episodes of Beverly Hills, 90210 (the second most of any cast member).

24. Was nominated for a Teen Choice Award for the role of Kelly.

25. She was also instrumental in launching the spin-offs Melrose Place and 90210, with the character of Kelly becoming a continuity icon by appearing in the most franchise episodes.

26. Her successful role on Beverly Hills, 90210 opened the door to several lead roles in made-for-TV films in the 1990s, including Danielle Steel's Star, Without Consent, Lies of the Heart: The Story of Laurie Kellogg, Falling for You, and An Unfinished Affair.

27. She also had minor and supporting roles in the theatrical films Telling You, My Brother's War, and Power 98.

30. In 2002, Garth starred in the sitcom What I Like About You as Valerie Tyler. Along with co-star Amanda Bynes, she appeared on the show for all four seasons.

31. In 2003, she starred in the television movies The Last Cowboy and the Christmas family drama Secret Santa, playing a journalist.

33. In 2005, she voiced her Beverly Hills, 90210 character Kelly Taylor, as well as an additional role in the DVD Film Family Guy Presents Stewie Griffin: The Untold Story.

35. She and co-star Andrea Bowen (known for the series Desperate Housewives) each won a Prism Award for their performances.

36. In 2007, Garth appeared on Dancing with the Stars: season five and was paired with Derek Hough. They reached the semi-finals in the competition.

37. In September 2008, Garth returned to the role of Kelly Taylor on the series premiere of The CW's spin-off series 90210. In the new series, Garth's character, Kelly Taylor, is now a Guidance Counselor at the fictional West Beverly High, where her half-sister Erin Silver also attends. Kelly was reintroduced with a four-year-old son, whose father is ex-boyfriend Dylan McKay.

38. On November 21, 2008, Garth appeared on the game show Are You Smarter than a 5th Grader?. She won $100,000 for her charity, the American Heart Association, for which she is spokeswoman for its "Go Red for Women" campaign.

40. In 2009, she played the role of Natasha in Candace Bushnell's Web series of The Boardroom.

41. She also appeared in a cameo role on the December 7 episode of the children's television show Sesame Street, entitled "Mary Mary Quite Contrary".

43. On February 18, 2014, it was announced that production had started on The Jennie Garth Project, a ten-episode reality television series that will air on HGTV. It chronicles Garth as she renovates a home Hollywood Hills, California for herself and her three children.

47. Gartha and Facinelli met while filming An Unfinished Affair.

48. Garth and Facinelli married on January 20, 2001, in a traditional Roman Catholic ceremony.

49. Garth and Facinelli have three daughters: Luca Bella, Lola Ray, and Fiona Eve. In March 2012, Facinelli filed for divorce. The divorce was finalized in June 2013.