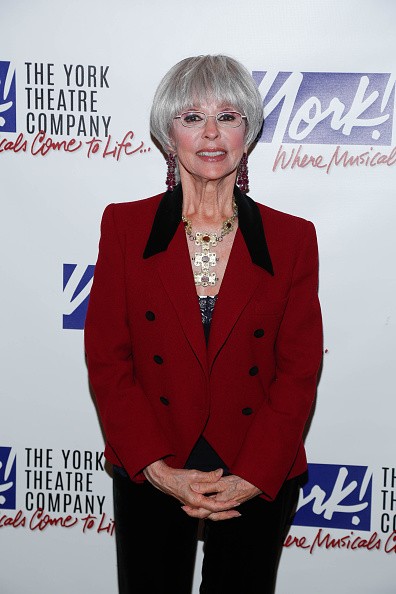 2. She is a Puerto Rican actress and singer.

3. She is one of the twelve performers to have won all four major annual American entertainment awards, which include an Oscar, an Emmy, a Grammy and a Tony.

4. Was the second Puerto Rican to win an Oscar.

7. She was born in Humacao, Puerto Rico.

8. Her mother was Rosa María, a seamstress.

9. Her father was Francisco José "Paco" Alverío, a farmer.

11. Was raised in nearby Juncos.

12. She has a younger brother.

13. Rita's mother moved to New York City in 1936, taking her daughter, but not her son, Rita's younger brother, Francisco.

15. She has a younger stepbrother, Dennis Moreno.

16. Rita began her first dancing lessons soon after arriving in New York with a Spanish dancer known as "Paco Cansino", who was a paternal uncle of film star Rita Hayworth.

17. When she was 11 years old, she lent her voice to Spanish language versions of American films.

18. She had her first Broadway role-as "Angelina" in Skydriftby the time she was 13, which caught the attention of Hollywood talent scouts.

19. She appeared in small roles in The Toast of New Orleans and Singin' in the Rain, in which she played the starlet "Zelda Zanders".

20. In March 1954, Moreno was featured on the cover of Life Magazine with a caption, "Rita Moreno: An Actresses' Catalog of Sex and Innocence".

21. In 1956, she had a supporting role in the film version of The King and I as Tuptim, but disliked most of her other work during this period.

22. In 1961, Moreno landed the role of Anita in Robert Wise and Jerome Robbins' film adaptation of Leonard Bernstein's and Stephen Sondheim's groundbreaking Broadway musical, West Side Story, which had been played by Chita Rivera on Broadway.

23. Moreno won the Best Supporting Actress Academy Award for the role of Anita.

24. After winning the Oscar, Moreno thought she would be able to continue to perform less stereotypical film roles, but was disappointed. "Ha, ha. I showed them. I didn't make another movie for seven years after winning the Oscar.... Before West Side Story, I was always offered the stereotypical Latina roles. The Conchitas and Lolitas in westerns. I was always barefoot. It was humiliating, embarrassing stuff. But I did it because there was nothing else. After West Side Story, it was pretty much the same thing. A lot of gang stories."

25. She went on to be the first Hispanic to win an Oscar, a Grammy, a Tony, and an Emmy.

27. She starred in Summer and Smoke, Cry of Battle, and afterwards, The Night of the Following Day, Popi, Marlowe, Carnal Knowledge and The Ritz.

28. From 1971 to 1977, Moreno played many characters on the PBS children's series The Electric Company, most notably Millie the Helper. In fact, it was Moreno who screamed the show's opening line, "HEY, YOU GUYS!"

29. She also had roles as the naughty little girl Pandora, and Otto, the very short-tempered director.

31. Made guest appearances on television series such as The Rockford Files, The Love Boat, The Cosby Show, George Lopez, The Golden Girls, and Miami Vice.

32. She was also a regular on the first three seasons of the sitcom version of Nine to Five (based on the film hit) during the early 1980s.

33. Moreno's Broadway credits include The Last of the Red Hot Lovers, Gantry, The Ritz.

34. For The Ritz she won the 1975 Tony Award for Best Featured Actress.

37. In the late 1990s, she gained exposure to a new generation of viewers when she played Sister Pete, a nun trained as a psychologist in the popular HBO series, Oz for which she won an ALMA Award.

38. She made a guest appearance on The Nanny as Coach Stone, Maggie's (Nicholle Tom) tyrannical gym teacher, whom Fran Fine also remembered from her school as Ms. Wickavich.

39. Moreno continues to be active on stage and screen, and as a singer. In 2006, she portrayed Amanda Wingfield in Berkeley Repertory Theatre's revival of The Glass Menagerie.

40. She had a recurring role on Law & Order: Criminal Intent as the dying mother of Detective Robert Goren.

41. She was a regular on the short-lived TV series Cane, which starred Jimmy Smits and Hector Elizondo.

42. In 2011, she accepted the role of the mother of Fran Drescher's character in the TV sitcom Happily Divorced.

43. She released an eponymous album of nightclub songs in 2000 on the Varèse Sarabande label, with liner notes by Michael Feinstein.

45. In 2014, it was announced that Rita Moreno has been cast in NBC's television film Old Soul, alongside Natasha Lyonne, Fred Willard and Ellen Burstyn.

46. In January 2016, it was announced that Moreno would costar in the Netflix reboot of Norman Lear's classic sitcom "One Day At A Time", playing the grandmother of the Cuban-American family at the center of the series.

47. Moreno had an eight-year-long affair with actor Marlon Brando.

48. On June 18, 1965, Moreno married Leonard Gordon. Gordon was a cardiologist who was also her manager.

49. They have one daughter, Fernanda Luisa Fisher.

50. She has two grandsons, Justin and Cameron Fisher.