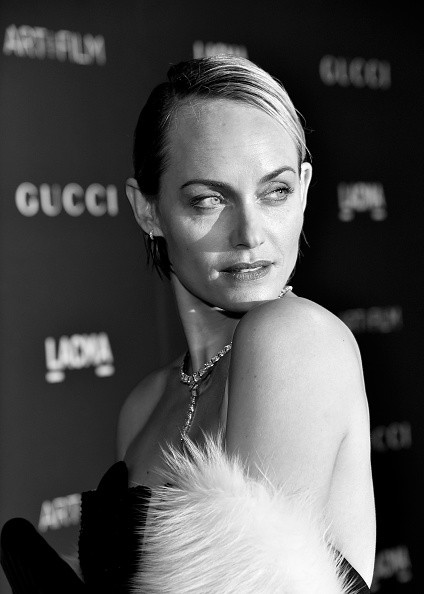 During the 1990s, Valletta reached the status of supermodel. Learn 45 facts from life and career of Amber Valletta.

2. She is a fashion model and actress.

3. Began her career as a fashion model, landing her first of sixteen American Vogue covers at age eighteen.

4. During the 1990s, Valletta reached the status of supermodel.

7. From 1995 to 1996, Valletta and her friend and fellow model Shalom Harlow hosted the MTV show, House of Style.

9. Made her acting debut in Drop Back Ten.

10. She then starred in the hit film Hitc.

11. She has since appeared in films such as Transporter 2, Man About Town, Dead Silence), Gamer, and The Spy Next Door.

13. Appeared in a recurring role as the fallen socialite Lydia Davis on the ABC prime time soap opera, Revenge.

15. Valletta was born in Phoenix.

16. Was raised in Tulsa, Oklahoma.

17. Her mother, Theresa Malaby, worked at the post office.

18. Her father is of Italian and Portuguese descent.

19. Her mother is of part Cherokee ancestry.

20. Got her start in the fashion industry when her mother enrolled her in modeling school at the age of fifteen at the Linda Layman Agency.

21. Valletta, along with models like Kate Moss, Eva Herzigová, Carolyn Murphy or Shalom Harlow, was one of the most recognizable faces of the generation immediately subsequent to the original supermodels.

22. During the 1990s she appeared thirteen times on the cover of American Vogue, second only to Claudia Schiffer's sixteen.

23. She was presented on the November 1999 Millennium cover of American Vogue as one of the "Modern Muses".

25. Later in 2000, she played a supporting role in the thriller film What Lies Beneath, starring Harrison Ford and Michelle Pfeiffer and directed by Robert Zemeckis.

26. She appeared alongside Nicolas Cage in The Family Man.

27. In 2003, she played Celine in Danny DeVito's Duplex, starring Ben Stiller and Drew Barrymore, and in 2004, she played Meline in Raising Helen, opposite Kate Hudson, Hayden Panettiere, Abigail Breslin, and Helen Mirren.

28. Valletta's first major film role was as Allegra Cole in Andy Tennant's romantic comedy Hitch. The film was released on February 11, 2005 and was a box office and critical success.

29. She played the female lead in the 2006 independent film The Last Time, co-starring alongside Michael Keaton and Brendan Fraser.

30. In 2007, she starred in the horror film Dead Silence as Ella Ashen, and portrayed the supporting role of Claire in Premonition, starring Sandra Bullock.

31. Also in 2007, Valletta played the leading role in the independent coming-of-age film, My Sexiest Year.

32. In 2009, Valletta starred alongside Gerard Butler in the science fiction action film, Gamer.

33. In 2010, she starred in The Spy Next Door, alongside Jackie Chan, George Lopez, and Billy Ray Cyrus; she played Chan's character's love interest, Gillian.

35. In 2011, Valletta was cast in the recurring role as the socialite Lydia Davis on the ABC television prime time soap opera, Revenge.

38. Valletta also serves as the spokesperson for Oceana's Seafood Contamination Campaign, where she brings awareness of the dangers of mercury poisoning in various kinds of seafood.

39. Her decision to join Oceana's campaign was prompted by the mercury-poisoning experience of a friend and the fact that she is a mother of two.

40. Valletta is a model for Marks and Spencer.

42. Together they had a son Auden born three years prior.

45. In July 2014, Valletta spoke out about her battle with drug and alcohol addiction.