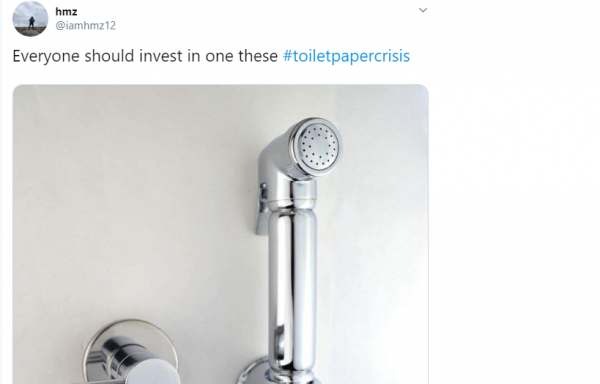 Since the World Health Organization declared COVID-19 as a global pandemic, the United States has been hoarding and panic buying food, water, hygiene kits and, the most noticeable one of all, toilet paper. The behavior of those who panicked caused a lot of stir online, although some were upset, there were those who still found humor in the situation.

The public wasted no time posting their hilarious stories and anecdote about toilet papers. Twitter user @MohRahemtulla posted a video online saying that since toilet papers are so valued right now, it could be a new way to pay your bills.

User @TheJZFlairShow posted a video of two women, an elderly woman, and middle-aged woman, fighting over toilet paper with the caption "The world has officially lost its mind!"

User @Tarquin_Helmet, on the other hand, made a movie parody titled "Indiana Jones and the last toilet roll" and twitted the video edit.

Twitter user @iamhmz12 found a solution to the toilet paper dilemma and posted a picture of a bidet saying that "everyone should invest in one these."

Twitter user @HatArmstrong posted an empty aisle at a Sainsbury's store with only one bottle of Corona beer visible. She captioned, "Didn't know whether to laugh or cry when I got to the loo roll aisle in Sainsbury's." 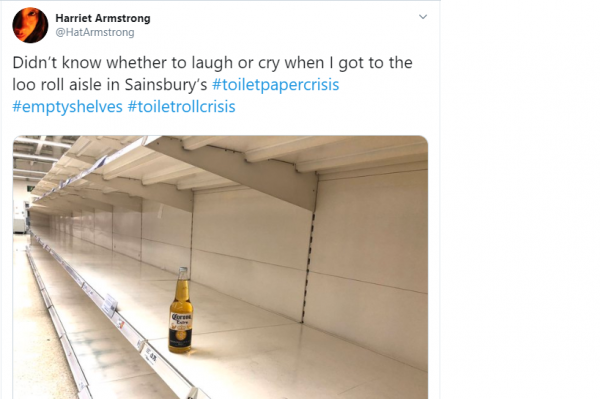 However not every netizen posted hilarious pictures of the toilet paper crisis. There are those who posted a concern about the ongoing issue and how it affects those who can't buy in bulk.

One Twitter user @ChapstickP said "STOP IT. You do NOT NEED this. You're hurting our most vulnerable. If you've survived the flu, you will survive this too. Our elderly may not." And she posted two pictures, on the left showed a man who hoarded numerous toilet papers and on the right showed an elderly woman who is reaching for items on an almost empty aisle. 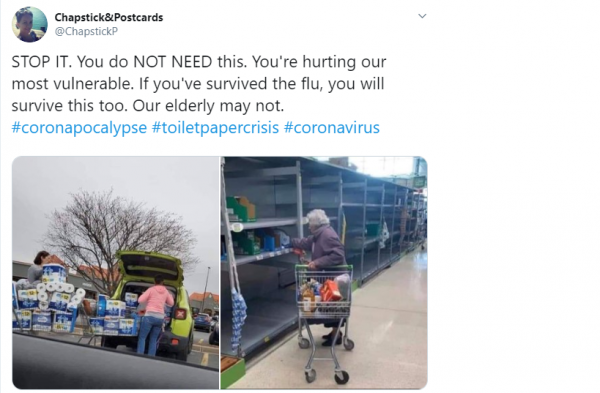 Twitter user @Kassy_Dreams posted a meme and captioned, "I'm unsure who created this meme but its spot on. Perhaps the entire world will be humbled by this Pandemic." 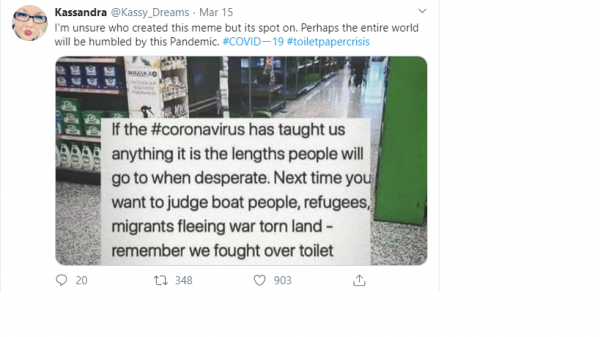 America is not the only country that is suffering from the toilet paper crisis. Twitter user @honeyandabee posted a picture that showed a woman with hundreds of toilet paper, the woman was getting ready to place all of the toilet paper in her garage. The user captioned "Can't stop thinking about this pic. How many Australians have been affected by this % of selfish, greedy bastards? These are the people that stripped shelves, that then led huge numbers to panic buy, and has now left the vulnerable with nothing." 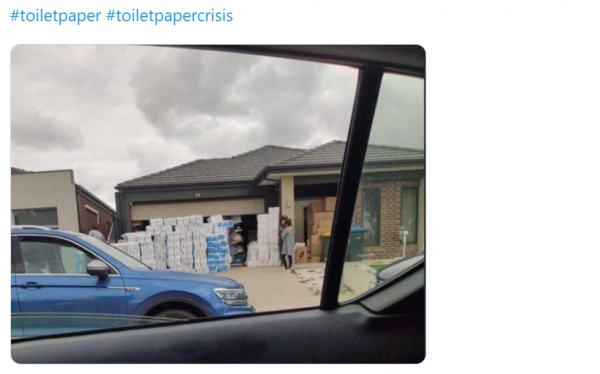 Behind the toilet paper crisis

This situation got a lot of people asking, why are toilet papers in so much demand right now? According to Mary Alvord, Associate Professor of Psychiatry and Behavioral Sciences at the George Washington University School of Medicine said that toilet paper is associated with our body's least agreeable function, which is body waste. The thought of not having anything to clean ourselves up can be scary especially at a time like this wherein families need to stay at home.

Other necessities such as food and water can be purchased anytime and anywhere, but other essentials like toilet paper, hand sanitizers, face masks, and alcohol are not that easy to purchase since they are only available at certain stores.

Experts are urging the public to calm down and stop hoarding so that everyone can be given the chance to shop for essentials during the quarantine period.